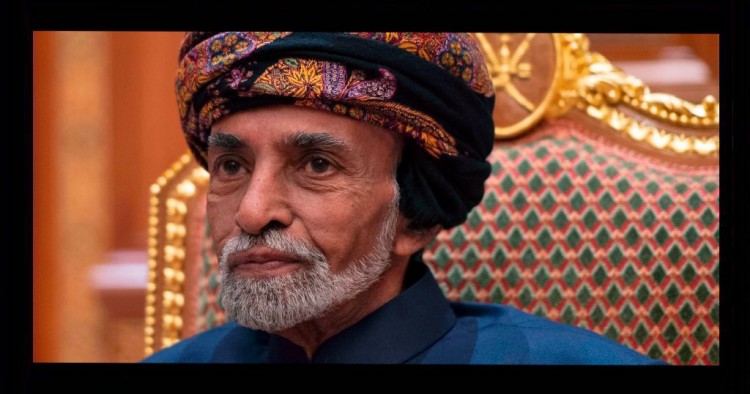 The passing of Sultan Qaboos bin Said al-Said on Jan. 10 truly marks the end of an era — in fact, the end of one of the most remarkable periods of development of any region in the history of the world. In his nearly 50 years on the throne, Sultan Qaboos was the singular architect of Oman’s transition from a near-medieval society to today’s modern country and a powerful force in the transformation of the region to one exponentially richer and more powerful than ever before. Across the Arabian Peninsula, only Sheikh Zayed bin Sultan al-Nahyan can be said to have earned an equivalent place in the modern history of his country, the United Arab Emirates.

The legends of the Sultan’s early days on the throne are legion. Seizing power from his tyrannical father, Sultan Qaboos inherited a country beset by chronic poverty. Governing institutions, including education and health infrastructure, were nearly non-existent. A raging Marxist-inspired rebellion in the southern Dhofar Province was fueled by the government in the neighboring People’s Democratic Republic of Yemen (South Yemen). Over the ensuing years, and aided by the discovery of modest oil and gas reserves, Sultan Qaboos set about addressing his country’s ills. He promoted the principles of governance including popular albeit limited participation in decision-making, established capable civil and military institutions, modernized the economy, and guided Oman into the 20th century. Demonstrating foresight and inclusiveness, the Sultan brought an end to the Dhofar rebellion, promoted development in the formerly neglected southern region, and welcomed its leaders into the ranks of the Omani government.

But the Sultan was not an advocate of unfettered modernization. Rather, he was determined to preserve the best of Oman’s traditional society while merging it within a modern framework. He was insistent that his capital, Muscat, would remain faithful to its historic roots and famously oversaw all of the city’s design features down to the style of its street lamps. In economic development, too, the Sultan was insistent that Oman pursue a measured pace and resisted those developments, like opening the country to mass tourism, that he believed would undermine Omani social and cultural traditions. Only relatively recently has Oman’s economy opened to greater diversification and development.

In Oman’s relations with the region and the world, the Sultan’s reign was shaped by his determination to keep the country firmly oriented toward the West but following the path of moderation and peaceful co-existence with its neighbors. Oman welcomed the Camp David Accords ending the Egyptian-Israeli conflict and was one of the first countries in the Arabian Peninsula to open lines of communication with the government of Israel while maintaining its firm support for an independent Palestinian state. Most notably, grateful for Iran’s strong support in the early 1970s in bringing an end to the Dhofar rebellion, the Sultan insisted that Oman would retain its friendly relations with the Islamic Republic of Iran. As a result, Oman continues to play a role as a valued intermediary between Iran and the international community. Nevertheless, the Sultan was also one of the founders of the Gulf Cooperation Council (GCC), formed in 1981 at the height of the Iran-Iraq war, and was an early leader of the effort to promote integrated military structures for the six GCC states, which culminated in the organization of the Peninsula Shield Force in 1984.

Regrettably, the Sultan’s passing comes at a moment both within Oman and in the region that is nearly as fraught as the situation he inherited when he first came to power in 1970. Internally, institutions of popular participation in government, principally the Majlis al-Shura (Consultative Assembly) and the Majlis al-Dawla (State Assembly), must continue to evolve to provide Omani citizens with a greater voice in their country’s affairs. Meanwhile, the demand for economic diversification, as the role of the energy sector as the driver of economic growth wanes, is greater than ever. To preserve stability, Oman will be challenged to assure a prosperous future for its growing population. Regionally, the Sultan’s presence in addressing tensions with Iran, repairing internal divisions within the GCC, and resolving the civil conflict in neighboring Yemen, will be sorely missed. The burden of addressing these many challenges will now fall on the shoulders of Sultan Qaboos’ successor, Sultan Haitham bin Tariq al-Said, who has pledged to maintain the course set by Sultan Qaboos.

For the Middle East Institute, Sultan Qaboos’ passing is especially poignant. Our Oman Library, a center for scholarship and research on the Middle East, was endowed by the Sultanate of Oman at the direction of the Sultan. We are honored that, with this facility, the Institute will continue to host generations of Americans seeking a better understanding of the region, thus honoring the Sultan’s memory and reflecting his legacy of wisdom, benevolence, and mutual respect.