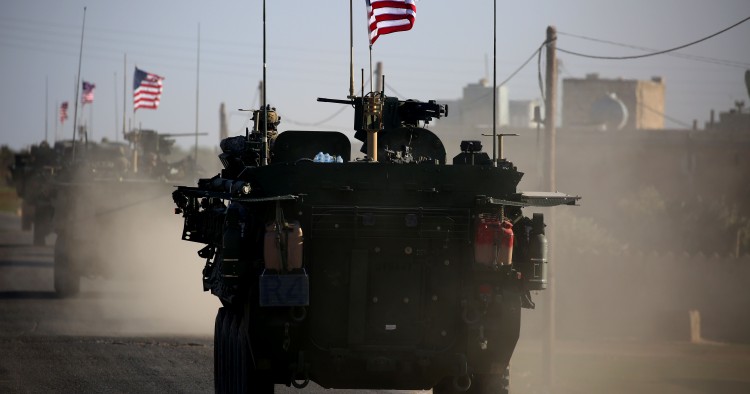 Over the past few weeks, my colleagues at MEI have debated whether the U.S. should stay in Syria or leave. Here I’d make a different argument: that it doesn’t really matter. The president has already made the decision to leave, and while his aides may have been able to slow roll the troop drawdown, the reality is that Donald Trump has made it clear the U.S. will not disburse any additional resources. Even within the 2020 Democratic field, not a single candidate has advocated increasing resources. We need to face this reality and start making policy decisions based on the facts on the ground — in both Syria and Washington. Only then can we credibly work to ensure that, using the limited means at our disposal, events unfold in a way that aligns with U.S. interests — the most crucial of which should be to ensure Syria is not a haven for terrorism — and alleviates the suffering of the Syrian people.

Even with a heavy dose of realism, the task before us won’t be easy. In the case of Syria, there are four examples of problematic decisions that will need to be remediated: 1) de-escalating the priority of counter-ISIS operations, creating the potential for a resurgence; 2) ceding to Turkey control of the narrative and negotiations on a safe zone in the northeast; 3) refusing to acknowledge the current state of the Syrian civil war; and 4) adhering to the precondition that “Iran must go.”

The question is no longer should we stay or should we go, it’s what can we achieve with the resources we have? In Syria, we have 1,000 troops and no money. The U.S. should refocus its priorities on ISIS and acknowledge that we do not have the means to accomplish much else.

ISIS deprioritization and detentions will lead to a resurgence

Thousands of ISIS members remain in the hands of the SDF. We’ve seen some progress on countries repatriating their citizens, including most recently Germany, which has committed to taking back over 100 German men, women, and children imminently, but as the Rojava Information Center (whose views reflect the anxieties of SDF leadership) concludes, it’s clear there is no unified global strategy — and may never be — to deal with this issue.

The idea of convening an international court has gained some traction, including from UN ISIS investigator Karim Khan and countries like the Netherlands and Sweden, but as the European Council on Foreign Relations wrote in late May, it would take years to establish and then prosecute fighters. While doing so would go a long way toward sending the message that groups and individuals that commit crimes against humanity will be held responsible, it would do nothing about the immediate problem of what to do with detainees.

Unfortunately, the lack of a coherent policy from the U.S., the only country with an established presence on the ground with the SDF, is leading others to shirk their responsibility to repatriate their citizens or — at the very least — help provide the resources to detain them.

We now see one result: ISIS is already beginning to resurge, both in Iraq, where countering ISIS has taken a backseat to the administration’s Iran campaign; and in Syria, where thousands remain in detention and lofty U.S. ambitions and declining resources have left all parties on the ground unable to plan long term.

A safe zone in the northeast is neither viable, nor in our interest

My colleagues Gen. Joseph Votel and Gonul Tol recently wrote that the safe zone agreed upon by the U.S. and Turkey would not work because it fails to address the security concerns of both the Turks and the Kurds or provide a long-term solution for both sides.

The U.S. continues to fall for Turkey’s saber-rattling, and this has resulted in a series of massive concessions. When Turkey purchased the S-400 missiles from Russia, it coupled its rhetoric with threats to invade northeast Syria. Out of fear of a Turkish incursion, aside from kicking Turkey out of the F-35 program, the U.S. response was notably muted — and days later, the U.S. cut a deal that appears to give Turkey the buffer zone in Syria it had long desired.

The U.S. went easy on a NATO ally that acquired an adversary’s missile system apparently out of concern that a harsher U.S. reaction would precipitate a Turkish response that could potentially put U.S. troops in Syria in danger. At any other time, a move like that would have resulted in a harsh rebuke, if not sanctions. Instead, Turkey got exactly what it wanted — both the weapons system and a buffer zone in northeast Syria. While the U.S. may have staved off a Turkish incursion, it did so at the cost of expanding the mission for U.S. troops in an area where they are already understaffed and under resourced, and effectively rolled over when another country threatened their safety .

The Syrian civil war is coming to an end

After a very short-lived ceasefire, the regime has restarted its campaign against opposition forces in Idlib Province, and it appears to be sustaining the momentum. Its relentless bombing campaign targeting civilians has never stopped horrifying the world, but where we once had hope that the international community might do something about it, the last eight years have proven us wrong. At this point, it is both reckless and irresponsible to pretend that the international community will ever intervene in Syria to alleviate the suffering caused by the brutal Assad regime.

While it may be true that the regime’s current gains in Idlib are not sustainable, it is also true that the regime has both the backing of Russia and Iran and the ability to force a stalemate and box in opposition forces until it can regain strength and begin again. Full regime takeover of the final swath of opposition territory in Idlib is inevitable. That is not to say that areas which have already reconciled with the regime are safe or ideal — evidence shows they are not — but territorial victory and unifying the country are two very different goals, and the regime clearly does not care about the latter.

And yet, the State Department continues to message to the Syrian opposition as if it still has the same strength the opposition had in 2013 – almost as if the U.S. government were still considering intervention. It is time to utilize what little leverage the opposition has left to cut the best possible deal for the people of Syria. Any additional prolonging of the war perpetuates their suffering and will only lead to more lives lost with the same unavoidable outcome.

Iran will remain in Syria

The Iranian-Syrian alliance did not begin in 2012; the two have been vital strategic allies since the Iranian revolution in 1979. Iran sees Bashar al-Assad’s survival as critical to its regional power and has expended resources — both monetary and human — to ensure it. The U.S. policy of demanding all Iranian boots leave Syria put a precondition on talks that neither country could ever meet, especially given how heavily Assad has leaned on Iranian forces to retake the majority of Syria.

Despite the heinous nature of the Assad regime and its Iranian backing, it would appear that both the U.S. and Israel have a vested interest in a stronger Syrian state — the only thing that would ensure Israeli security and deter Iranian aggression. Supporting or expanding conditions that work against it will only push Iran to sink its teeth further into the Syrian state apparatus, and yield the opposite result of that intended.

Aides appear to have walked back, or at least significantly slowed, the president’s December announcement that the U.S. was leaving Syria; however, absent additional policy attention, monetary resources, or troops on the ground, it is impossible for the U.S. to accomplish any of its lofty goals. The U.S. cannot ensure ISIS isn’t a threat, protect the Kurds from a Turkish invasion or monitor a buffer zone, support opposition forces fighting Assad, and deter Iran with 1,000 troops on the ground and no money.

I would and could argue day and night for additional U.S. resources to be expended in Syria, especially for areas liberated from ISIS and counterterrorism operations. I strongly disagreed with the president’s withdrawal announcement and decision to cut critical stabilization funding, but it’s also clear to me he will not be walking that back. Experts, including former Special Presidential Envoy Brett McGurk, who resigned after the December announcement, have argued for months that we cannot do more with less in Syria. That wasn’t the case six months ago and it isn’t now. It’s time to start making hard decisions rooted in the fact that no additional attention or resources will be put toward our policy ambitions in Syria. That means refocusing on the counter-ISIS mission and scaling back everything else.

Once the U.S. government realigns its strategy implementation with the policy decisions the president has already made, the U.S. can start focusing on more realistic and attainable goals. Anything less will increase the risk to our troops, strain our relationship with Turkey, create unfair conditions for our SDF partners, and mislead and confuse the Counter-ISIS Coalition.

Elizabeth Dent is a non-resident scholar with the Middle East Institute’s Countering Terrorism and Extremism program and a senior consultant with NTT Data. The views expressed in this article are her own.”