Syria in Vienna: Governance Before Elections 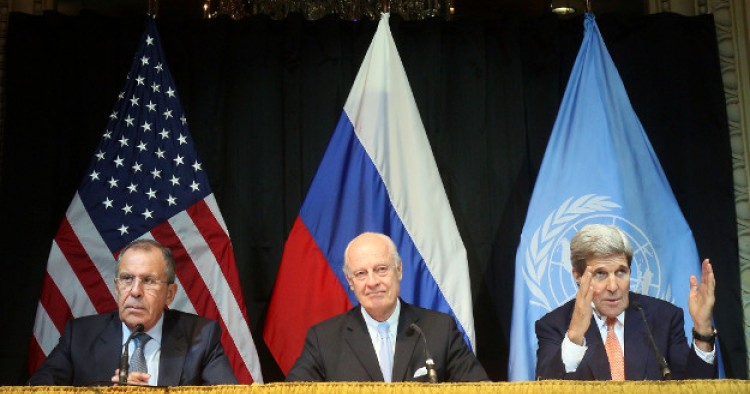 Bashar al-Assad himself was reelected in July 2013 to a new, seven year term; he got 89 percent of the vote, according to the Syrian government.  Moscow and Teheran recognized the legitimacy of the election, but it didn't stop the fighting.  The large Syrian opposition, both political and armed, rejected the election and they have grown stronger, not weaker since the summer of 2013.  Indeed, their gains on the ground forced Assad in July 2015 to admit his forces were retreating in some locales and ultimately those retreats led Russia to intervene militarily in September 2015 to bolster a flagging Assad military.

Another election under Assad's government, or a government with only a few cosmetic changes in unimportant ministries, won't resolve the conflict.  Unlike diplomats meeting in Vienna and Geneva, Syrians have seen firsthand how the Syrian government operates and how it manages elections.  There are four different secret police agencies, and none of them accept serious challenges to the regime.  The grim photos of thousands of bodies of suspected oppositionists that a defector brought out of a Syrian Military Intelligence prison show what these secret police do.  Bashar won 98 percent of the vote in 2007 and he ran unopposed in a referendum in 2000.  His father enjoyed similar election "landslides" during his 29 years of iron-fisted rule.  The Syrian state that the international community aims to maintain is designed to arrest or kill serious oppositionists, stop opposition political campaigns, block their equal and fair access to the media, deter or prevent opposition supporters from organizing or voting, and to skew ballot counts.

Foreign diplomats might think that giving control of the election process to an outside group, such as the United Nations elections assistance team, will fix the problem; the October 30 Vienna communiqué calls for this.  A UN team did a good job in Iraq in 2005 and 2006 helping Iraqis hold three rounds of elections, but there the team worked with an independent Iraqi election commission with an independent budget that took almost a year to establish.  The American military oversaw the Iraqi security apparatus, and the Americans wanted to enable the UN to do its work credibly.

Syria would be a very different story, starting with security.  A UN team that in February 2014 tried to deliver food aid to the besieged city of Homs immediately came under fire -- from regime supporters.   Moreover, the Syrian security apparatus, untamed and unchanged, will -- we can count on it -- sabotage any process to hold a free election.  It has to in order to avoid accountability for its past actions. Imagine, for example, that a Syrian opposition candidate or two is arrested or murdered at the hands of a Syrian agency or that Syrian government supporters forcibly prevent opposition election campaigns.  The UN election team would have little leverage against the Syrian security apparatus.  Russia and Iran have a history of supporting the Syrian government despite its most brutal atrocities, and no one in the opposition would trust their guarantee of good Syrian government behavior.  Meanwhile, the U.S. and the West forfeited their credibility of their guarantees with the Syrian government's sustained use of chemical weapons.

Nor would extremists among the Syrian opposition cooperate with the UN teams; for starters, jihadis reject the legitimacy of any election for government office as a matter of theological principle.  There is no realistic prospect that the extremists will be shut down anytime soon in Syria such that UN teams could move around safely or that Syrians living in the eastern half of Syria could vote.

Those in eastern Syria won't be the only ones who will have difficulty voting.  Nearly half of the Syrian population is displaced - about eleven million people.  How the UN team would locate, register and enable them to vote will be an enormous logistical and security challenge.  After the UN's experience in Iraq, where the displaced numbers were far smaller, it is difficult to see how this half of the population could be able to vote in less than a year.

Ignoring these problems and plunging ahead would be a horrible mistake. The outcome of a discredited election will be sustained fighting, as we saw in the 2013 Syrian election.  It might also be worse.  Those more moderate political elements who urge participation in a discredited process will be weaker in the face of extremists who will reject the process from the outset.

It is exceptionally important, therefore, that the governance element mentioned in the Vienna communiqué start to address long-overdue rule of law and security sector reforms.  That means more than a few cosmetic changes to the existing Syrian government well before any UN-supervised elections can be held.  In particular, there need to be substantial changes in the security apparatus, both leadership and procedures; this will be difficult, but it is urgent.  Local ceasefires and release of political prisoners is not nearly enough to reform governance. Completely abolishing the security apparatus, as the Americans did in Iraq, is not the right answer either; but in addition to leadership changes, there will need to be a powerful and fair vetting system for security officials.

The military courts and the Supreme State Security Court that egregiously abused political opponents over the past decades must be abolished.  Provisions of the constitution, such as those that give the President control over the judiciary and allow him to write and pass laws must be suspended.

Such changes are the most urgent, but many other changes will have to be implemented to stand up "credible, inclusive and non-sectarian governance” that is, above all, accountable to the Syrian people. Sequencing these steps with disarmament moves will be a tricky subject for negotiation.

As hard as those negotiations surely will be, rushing to elections without serious, perceptible progress on the rule of law first is a sure-fire scenario to make the Syrian civil war even nastier.