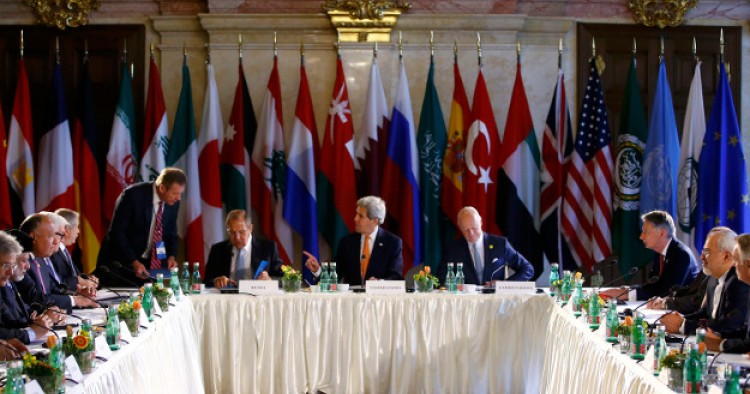 The following op-ed was originally published in Arabic by Asharq al-Awsat.

The Syrian Crisis has now definitively entered a new phase, in which the shifting priorities of external states are driving the creation of an interim set of pre-settlement conditions. Since the Saudi-led intervention in Yemen in March 2015 and Russia’s military intervention in September 2015, the geopolitical dynamic has been evolving in a direction that has undermined the Syrian opposition’s struggle against the Assad regime. Two years later, that anti-Assad struggle has never looked weaker or more vulnerable. Whatever nuanced statements one might hear these days from officials in Washington, London, Paris, Riyadh or Ankara, the reality is that none of those governments now seek the removal of Assad, nor do they even see that as possible.

This new reality is partly a reflection of today’s reality: Assad has never felt stronger or more confident of his survival. But it is also a reflection of fatigue amongst the so-called Friends of Syria. And frankly speaking, it is also a reflection of opposition failures – to unite, to isolate extremists or to avoid corruption and infighting. Those factors in addition to others, have produced a dynamic in which it is now common to hear American and British government officials proclaim the opposition as “defeated” or “a dead cause.”

For now, the de-escalation zones negotiated in Astana and guaranteed by Russia, Turkey and Iran appear to be holding in place, but a new and potentially more significant process between the U.S. and Russia may be deserving of more attention. Senior U.S. State Department officials Michael Ratney and Brett McGurk spent many months in direct negotiations with Russia, over de-escalation in southern Syria; de-confliction in the east; and over future political issues like constitutional reform, the restructuring of Syria’s security apparatus and prospects for administrative decentralization. Perhaps to both Russian and American surprise, those talks are said to have been extremely productive. The de-escalation agreement in southern Syria, for example, was negotiated over for weeks in minute detail, on a street-by-street level.

To some American policymakers and much of the Trump administration, the prospect of an improved working relationship with Russia is an opportunity to embrace, and a chance to rid American policy of the troublesome Assad issue. ‘Leave the Assad problem to the Russians,’ is a sentence frequently heard from American officials in private, these days. That Russia is now being more constructive in negotiations is a reflection that it knows that it has won. Concurrently, the fact that America is now intensively engaging with this more constructive Russia is a reflection both of American fatigue and of an American desire to use Russia to minimize Iranian gains in Syria.

Although Russia and Iran do not share similar long-term visions for Syria, their interim objectives do still remain largely the same. Moreover, from an Iranian perspective, victory has already been achieved in Syria – nobody, not even Russia, can take that away from Tehran. Nevertheless, the de-escalation agreement in southern Syria is being used as a test case for what could eventually turn into a much broader U.S.-Russian mechanism for placing Syria into an interim era of managed stability.

According to recent reporting, from an American planning perspective, that interim era is one in which the Syrian opposition will be abandoned to lose control of all territory in and around Damascus and Homs as well as portions of western Aleppo’s countryside and northwestern Idlib (principally Jisr al-Shughour). Presumably, America intends to do nothing to prevent those opposition losses, because they would in fact ‘clean up’ the interim era of enforced stability. From there, the opposition would be confined to the south and Idlib. Idlib province today, is seen by many in Washington as a lost cause – an Al-Qaeda safe-haven deserving of counter-terrorism attention, not opposition protection.

This is where America and its allies in the Middle East are acting dangerously. By pursuing our short-term interests and attacking symptoms of the Syrian crisis, we are ignoring the long-term consequences of allowing its root causes to fester. Limiting our attention to fighting ISIS will never resolve what fueled ISIS in the first place; leaving Idlib to Russia’s carpet bombing will never destroy Al-Qaeda or weaken its narrative; and strangling the moderate opposition in the south will never result in its complete surrender to Assad. Similarly, it seems extraordinarily naive to expect U.S.-Russian negotiations to result in a weakening of Iran’s role in Syria, when it is Iran that controls 160,000 Syrian and foreign militiamen and Russia controls only 30,000 Syrian soldiers.

The U.S. and its partners in the region have established geographical stakes in Syria’s crisis. To secure our long-term interests, those stakes must be protected, guaranteed and given the space to thrive. Creating and fostering these interim zones of opposition-controlled prosperity appears to be the best chance available to ensure that the Assad regime is not given the opportunity to re-establish soci-political dominance from east-to-west and north-to-south. If we are to work towards an interim period of reduced hostilities in Syria, then decentralizing authority to internationally-supported and defended and socially-representative opposition local councils may be the best way to strengthen our hand in determining the future design of a long-term settlement. If we pull both of our hands away from the opposition, then we will cede victory to those who guarantee further instability, to the detriment of our own long-term interests. We must also never forget that we are not just dealing with armed groups – we are playing with the lives of millions of innocent civilians.

To make the creation of interim zones of opposition-controlled prosperity a more attractive proposition to policymakers, Syria’s opposition armed factions, civil councils and exiled political bodies now face the greatest challenge of their revolution: to prove themselves to be flexible and professional partners worthy of continued support. Opposition groups in northern Syria may now have realized that welcoming Jabhat al-Nusra in as an ally was a double-edged sword, but that is five years too late. If Idlib is to be saved from the brutality of a pro-Assad coalition campaign or from becoming a walled-in ‘Talibanistan,’ then the opposition must urgently develop an alternative path forward there. Some elements of Syria’s opposition are in a position today to become valuable new partners in the continued U.S.-led fight against ISIS. Others who are not must urgently adapt to today’s new circumstances and work constructively to protect what they still control and represent.

For now, we appear to be in a stage in which Syria’s external players are forcing the Syrian crisis into a new phase, but not one that necessarily suits our interests. Iran is inches away from achieving its long-sought after status of Levantine hegemon; Hezbollah is immeasurably more powerful than before the Arab Spring; the conditions are being set for the return of “ISIS 3.0;” and Al-Qaeda has adapted its strategy and image to better exploit the kind of instability that looks set to grip the Middle East for many more years to come. The international community appears to be slowly surrendering its leverage in Syria to those who would guarantee more repression, more violence, more blood and more instability. If the UN Commission of Inquiry on Syria has sufficient evidence to prosecute Assad for war crimes, then we should not be the ones to protect him from what should be his eventual fate.