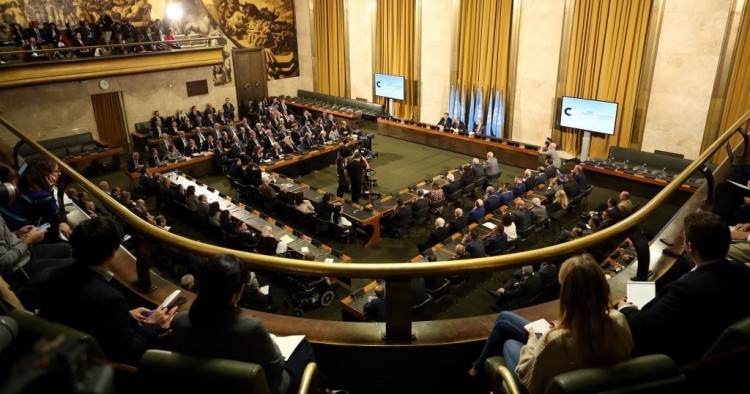 Under U.N. Security Council Resolution 2254, a critical step toward a political solution to the Syrian crisis is the drafting of a new Syrian constitution. To that end, the Constitutional Committee in Geneva has conducted three rounds of discussions, with little to show for it. One of the key components of the new constitution is the decentralization of power. The issue is hard for Syrians to approach objectively, however, because — depending on their class, ethnicity, and religion — they have been impacted by the highly centralized system of governance in vastly different ways.

In order to understand the different views of Syrians on the issue of decentralization in a new constitution, The Day After (TDA), a Syrian organization that works toward empowering civil society, democratic transition, and justice in Syria, conducted a survey of 2,966 persons between June and July 2020, including Syrians within the country as well as in the diaspora. 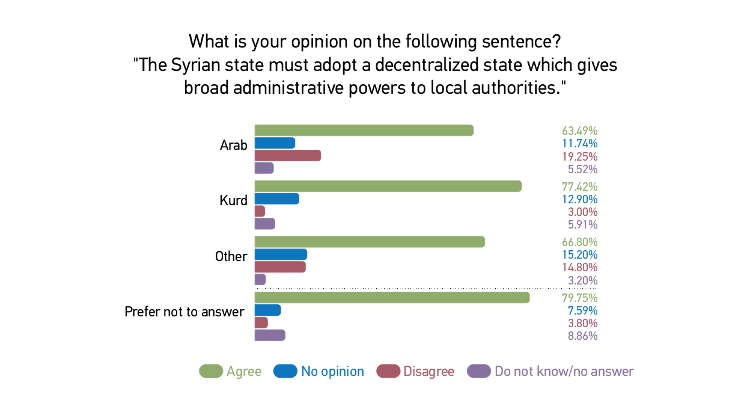 Among all the ethnic groups surveyed, Kurds supported decentralization most strongly, most likely due to their positive experience under the Autonomous Administration of North and East Syria (AANES) and their historical experience of oppression under the centralized government since the early 1960s.

In terms of religious groups, Alawites were most opposed to the idea of decentralizing power. This is relatively unsurprising, as such a governing structure would take power away from the currently Alawite-dominated regime.

However, compared with the survey conducted two years ago, there was a significant rise in positive sentiment and a large decrease in negative sentiment among Alawites toward decentralization. This may be due to the severe economic crisis gripping the country and a more prevalent perception today of mismanagement by the regime.

The Druze were the most ardent supporters of decentralization among all religious groups. In contrast to Alawites, the Druze have only seen their autonomy shrink under the current centralized system.

Support for decentralization declines, however, when it comes to specific policy proposals — a feature shared by all respondents. For example, respondents were much less supportive of giving local administrations the ability to levy and collect taxes than they were of devolving power in broad, theoretical terms.

A history of centralization

Over the course of the 20th century, Syria trended toward greater political centralization through a series of constitutions. The 1920 Constitution of the Kingdom of Syria divided the country into provinces, which had the power to legislate and collect taxes. But the king still appointed the provincial governors, limiting their autonomy. The 1950 constitution removed the ability of governorates to make laws or collect taxes. Instead, provincial councils — three-fourths of whose members were directly elected — could only supervise the local provision of services.

This drive toward centralization was probably motivated by leaders eager to reject the fractured political geography imposed on Syria and Lebanon by the French during the Mandate Period, which ended in 1943. At the time, the French had divided the country into several smaller states with broad powers, including the states of Damascus, Aleppo, Jabal Alawites, Greater Lebanon, and Jabal Druze, in addition to the districts of Deir ez-Zor and the Upper Jazira region, which remained under direct French rule.

After the 1963 Ba’athist coup, whatever local powers had previously existed were centralized in the hands of the authorities in Damascus. Despite the passage of the Local Administration Law of 1973 — which gave local authorities broader powers and independence — the Ba’ath Party’s domination of the security and military apparatuses meant these local powers existed in name only. In reality, provincial governors would be “assisted” by the heads of local Ba’ath Party branches, who were appointed directly from Damascus. This centralized system of governance stayed largely the same until the outbreak of the Syrian revolution in 2011, when Damascus nominally devolved a number of powers in an attempt to appease protesters’ demands.

On the whole, there’s a broader consensus for decentralization in Syria in 2020 than in TDA’s survey on the same topic in 2018, with an increase in positive sentiment for a decentralized state across all religious affiliations. The percentage of both Sunni and Christian respondents who “agreed” with the idea of a decentralized state increased by more than 20 points. 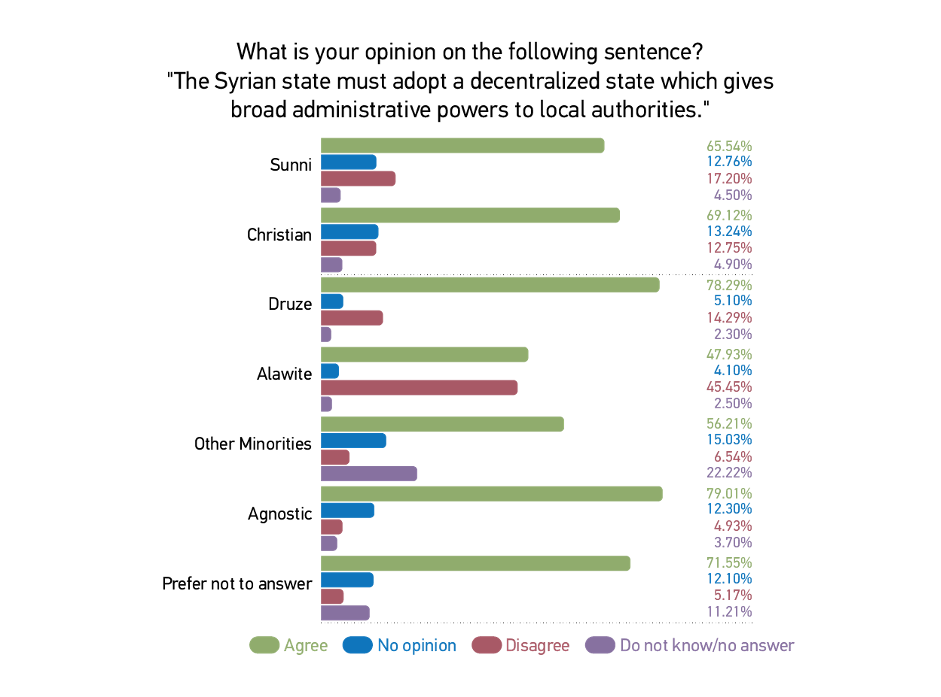 Even more remarkably, there was a huge growth in the number of Alawites who agreed with the idea of a decentralized state; the number increased from just under 9 percent in 2018 to 48 percent in 2020. The percentage who disagreed with the idea of decentralization declined from 92 percent to just over 45 percent. Still, out of all religious affiliations, Alawite respondents agreed the least.

However, support for decentralization declines across the board when it comes to delegating specific powers to local authorities. For example, in response to a question about how much control local authorities should have over tax imposition and collection, only 20 percent of respondents wanted to grant the widest possible local powers, while over 25 percent preferred to grant local authorities only minimal powers. 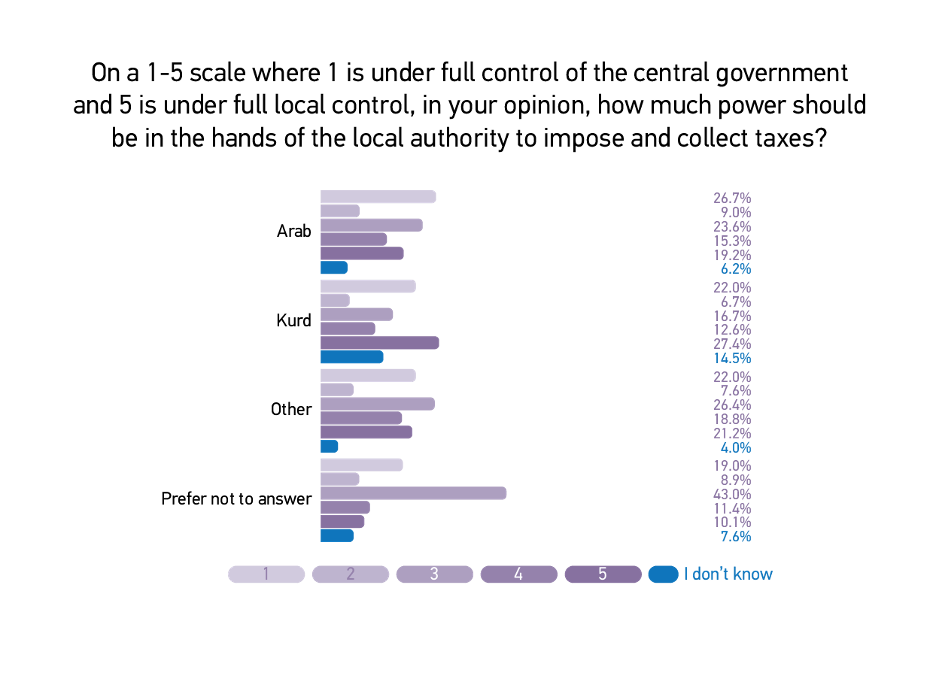 Respondents were similarly less enthusiastic about decentralization when asked about locally delegating the power to appoint officials, or to let local authorities dictate judicial, security, and spending policy. In this case, a plurality of respondents (40.3 percent) felt that local authorities should be given only minimal power to legislate.

Although this trend holds true for other questions about specific local powers for most ethnic and religious affiliations, Kurds were the one exception to the rule. They appear to be consistent in their desire for decentralization, in both broad and specific terms. The split among Kurds and the other ethnic groups in the survey sample was clear when looking at the idea of making Kurdish Syria’s second language. Arabs tended to disagree with this option, while Kurdish respondents were in almost complete agreement. 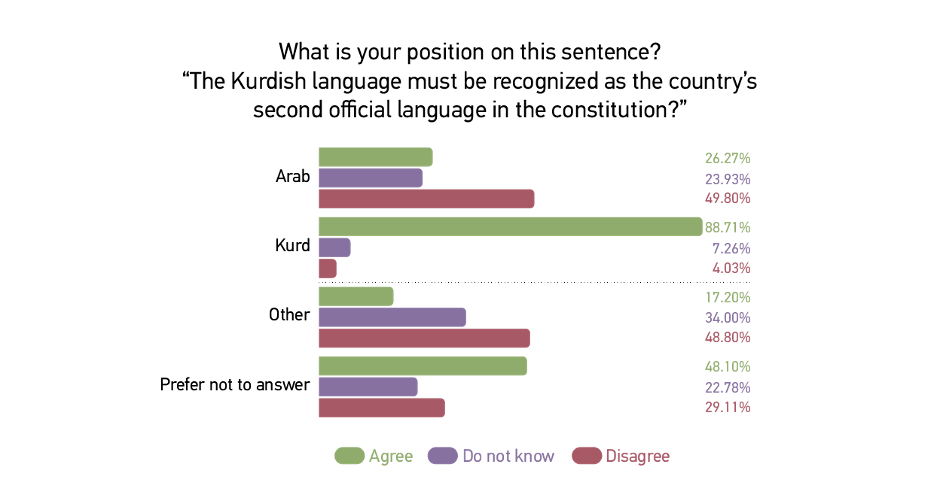 In general, the prevalence of positive sentiment toward decentralization seems linked to both historical oppression under centralized systems of rule in Syria and the positive experience of quasi-self-rule under the AANES since 2014.

A survey question about granting the AANES special status under a new constitution further illustrated the gap between Kurdish and other respondents. It’s worth noting that the second highest level of support after Kurdish respondents came from Syriac/Assyrians, both of which have enjoyed unprecedented political recognition in the AANES. 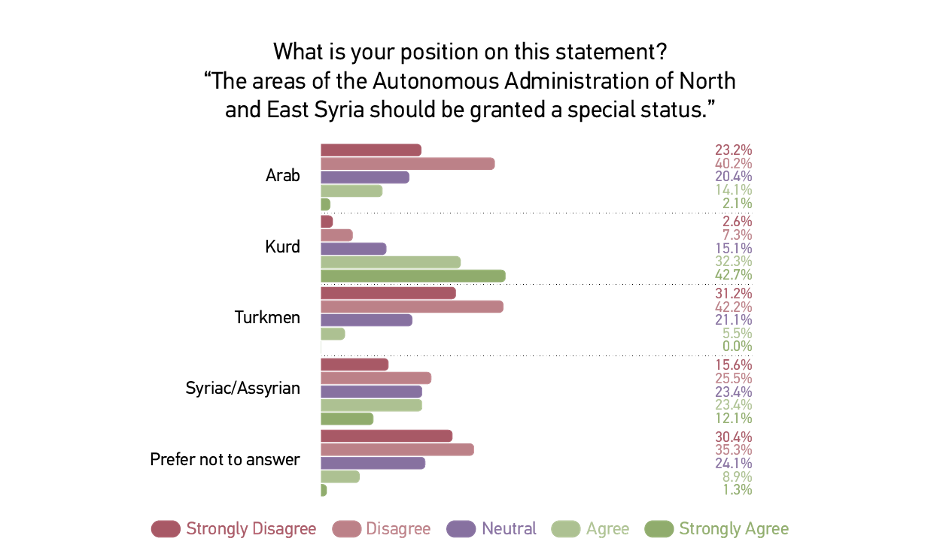 Arabs and Turkmen both seemed especially suspicious of granting the AANES special privileges, the latter most likely due to a shared cultural identity with Turkey, which has been active in opposing the Kurdish-led political authority in northern Syria.

The Arab respondents’ lack of support for said special privileges could have a number of causes: current feelings of marginalization among Arab respondents living under the rule of the AANES, resentment among opposition-leaning Arabs over conflicts between Arab opposition militias and the Syrian Democratic Forces (SDF), and opposition to a federalized system of governance in comparison to just a more decentralized model. In general, however, Arab respondents seemed to place importance on their ethnic identity and its position in conceptions of a post-2254 Syrian state.

In addition, the study suggests that, with the exception of the Kurds, Syrians seem to be more suspicious of devolving power when it comes to questions of taxation, justice, and security (which was not included in this article for the sake of brevity). In effect, this means that most respondents, especially Sunnis and Alawites, want to limit decentralization to only service provision, similar to the form of decentralization laid out in the 1950 constitution.

The results of the survey make it clear that the term “decentralization” has different meanings for Syrians. Its association with issues related to the constitutional recognition of other ethnic and cultural identities — such as Kurdish identity — makes it a divisive subject, regardless of religious or ethnic affiliation.

The Operations & Policy Center (OPC) is a Syrian think tank and service provider based in Gaziantep, Turkey. Established in 2014, the OPC provides research and consulting services to enhance policy making, development programs, and humanitarian response evaluation and design. It relies heavily on technology to provide original and intuitive solutions to policymakers and the public. The OPC is managed by Basel al-Junaidy, while Karam Shaar, who is a Non-Resident Scholar at MEI, is the Lead Researcher.

Orwa Khalifa is a Syrian researcher at the OPC. He is interested in social and political transformation in Syria, with a special focus on exposing the power structures shaped by the struggle of both local and regional forces. He studied Political Science and has worked as a journalist since 2010 and as a researcher since 2015.

William Christou is a MENA-based journalist covering the politics of the Levant and the Mediterranean, and a researcher with the OPC. Follow him on Twitter: @will_christou.