The Syrian Refugee Crisis: What’s Next? 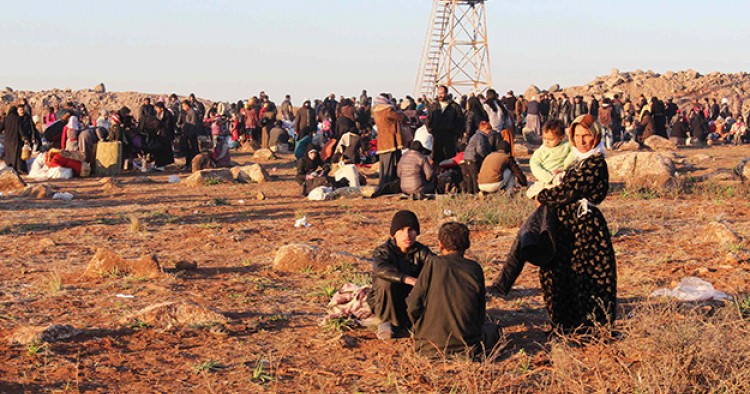 “What’s going to happen to the Syrian refugees?” This was the question I asked of everyone I met during a recent trip to Lebanon and Turkey to research Syrian displacement. Without exception, those I asked—government and UN officials, academics, business and NGO representatives, Syrian diaspora groups, and Syrian refugees—responded with the same answer: “I don’t know” (or sometimes “‘God only knows”). When pressed, almost everyone said that the war in Syria would continue for the foreseeable future and that more people would likely leave or try to leave.

Of course, no one knows what is going to happen to the refugees and internally displaced persons (IDPs), and the current conflict seems more unpredictable than ever. But when half of the country’s population has been uprooted from their homes, we need to start thinking about ways in which these 12 million people can get on with their lives.

Say the war—between Assad and the opposition, between the Kurds and ISIS, between ISIS and other armed groups—continues for another five years. What will happen to the four million refugees now sheltering in neighboring countries? The countries that host refugees have responded generously and genuinely, but the economic and political costs of the refugees’ presence are sharp and growing. A decline in international assistance can change the calculus of the implicit “deal” in which countries are persuaded to allow the refugees to stay in return for assurances that donors and international agencies will pick up the tab. But what if the present huge—but insufficient—international funding isn’t there? Indeed, the funding front is not looking good; as of mid-year, pledges for the UN’s $4.5 billion appeal for Syrian refugees are only at the 24 percent mark—and the year is already half over.

Here are some scenarios of what might happen to the refugees.

Five more years of limbo and return. Governments in the region continue to allow those refugees already in their countries to remain, albeit tacitly and temporarily, but do not give them the right to work or full access to education or health care. These host governments also continue to restrict the entry of new refugees. The international community continues to provide support, albeit at a diminishing rate, which keeps the refugees alive but does not allow them to build futures for themselves and their families. This is the most likely (and not the worst-case) scenario. What does this mean when the conflict eventually ends? Many, and perhaps most, of the refugees will return to Syria even before conditions there permit. While timely return is critical to recovery, it will undoubtedly put pressure on post-conflict Syria in the short term as the country struggles to rebuild devastated cities and meet increasing demand for services by returning refugees and IDPs. The return of Syrian refugees decreases pressure on the host governments, and the refugees who remain are tolerated until they too can go home or successfully, and under the radar screen, integrate into their host communities. (A small caveat: whenever refugees return in large numbers, international funding for the remaining refugees decreases or is reprogrammed to support returns.)

Tightening of the screws. Governments in the region, for political and/or economic reasons, begin to force refugees to return or to move elsewhere. This is unlikely to take the form of large-scale forced deportations but rather will occur via a quiet tightening of the already tight screws on refugees, which include crackdowns on illegal labor and more restrictions on refugees’ lives, such as curfews and other constraints on freedom of movement and higher fees to renew documents or access services. This tightening may also include an increase in spontaneous attacks against refugees. International support can no longer keep up its end of the bargain, and host governments decide to take matters into their own hands and act in accord with their national interests. There are signs that this is beginning to happen. As pressure builds, more refugees leave, some taking their chances on the dangerous border and sea crossings to Europe, some returning to Syria even though the war continues, and many living in ever more desperate conditions as refugees. When the conflict ends, most of the refugees in neighboring countries will return quickly. Those who have made their way to distant lands will likely not return soon.

Long shot. While politically unlikely, it is conceivable that a large-scale resettlement program à la Indochina (where some 1.5 million were resettled) is developed that provides sufficient encouragement for host governments to continue to allow the refugees to remain and perhaps to improve their standard of living. This would be a tangible sign that host governments are not going to be left holding the bag. When the conflict ends, many of the refugees in neighboring countries will likely return, though perhaps not as many or as quickly as in the other scenarios. Those resettled in distant lands will be unlikely to return.

Establishment of a “safe” zone inside Syria. Presently, Turkey is the only country in the region with the capacity to receive and assist more Syrian refugees. But Turkey has also, from time to time, considered the creation of a safe zone inside Syria to protect Syrian civilians as well as to provide a space for opposition forces to operate safely (which, as I have written before, may be an impossible and deadly combination, at least for Syrian civilians). Nonetheless, if a safe zone worked perfectly, it could provide a solution for desperate displaced Syrians who would otherwise seek to enter neighboring countries. It could, however, also provide a convenient rationale for other governments, including European governments, to return Syrians to Syria in spite of the ongoing war.

The refugee crisis forces a political solution. While I would like to believe that the sheer scale of human suffering will lead the world’s political leaders to take decisive political action to end the slaughter inside Syria that is driving the refugee crisis, the record so far is not encouraging. But if European borders were to come under even greater pressure from refugees—say 500,000 arrivals rather than the 50,000 Syrians who have arrived thus far in 2015—perhaps there would be more appetite for concerted Western action to stop the bloodbath. Or if the refugees in neighboring countries were perceived as a military threat to the governments hosting them (which has so far not been the case), perhaps that would inspire action in a way that appeals for altruism have not.

Like all the people I spoke with in Lebanon and Turkey, I don’t know what is going to happen to the Syrian refugees, but I do believe that we need to listen more to those people most affected by this terrible war—the refugees and IDPs and local civil society organizations—to see what medium-term solutions might be possible even in the face of protracted conflict. What would it take, for example, to encourage host governments to give refugees the right to work and full access to education?  What would be needed to make sure that Syrian babies born in exile are not stateless? After four years of huge financial contributions, how can donor governments be encouraged to continue their support for refugees? These are all difficult issues, but in the absence of a solution to the conflict, we need to be creative in seeking solutions for those who are displaced.