A thaw in Tunisian-Syrian relations 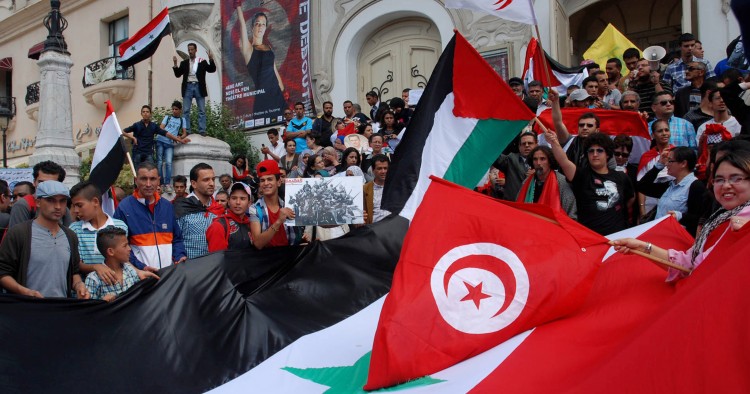 Observers of political affairs in the Arab world are keeping a close eye on the upcoming Arab League summit, set to be held at the end of March in Tunis. Although Syria will not participate in the meeting, the question of when, or how, to bring Damascus in from the cold after an eight-year suspension from the body will be the most important issue on the agenda.

The host country, Tunisia, frequently hailed as the only “Arab Spring success story,” has a unique perspective on the Syrian crisis. For years many Tunisians have voiced staunchly opposing positions on the conflict, with certain segments demanding a full restoration of diplomatic relations between Tunis and Damascus. Although divisions remain between Tunisians who supported the regime and those who backed the opposition during the Syrian civil war, there is a recent and growing consensus that Tunisia’s interests would be best served by re-establishing ties with the Assad government, now that it has “won” the conflict.

In February 2012, Tunis cut diplomatic ties with Damascus to protest the government’s brutal crackdown on Arab Spring activists and demonstrators. Its decision carried considerable symbolism and moral weight. Widely credited with starting the Arab Spring revolts that spread across the Middle East and North Africa in 2011, Tunisia represented, in the words of Jeffrey Laurenti, the “vanguard of democratic change against the region’s encrusted despotisms.” Therefore, it was natural for Tunisians to sympathize with the protestors in Syria and for the government to insist that President Bashar al-Assad step down.

As Tunisia’s first post-Arab Spring government was led by Ennahda — the country’s main democratic, Islamist, Muslim Brotherhood-affiliated political party — there was an ideological dimension to its stance as well, with the Syrian Muslim Brotherhood playing a central role in the opposition at the outset of the uprising there. For many Tunisian Islamists, the experience of being oppressed under secular dictatorships that imposed the “Bourguiba model” on the North African country’s conservative, Muslim-majority society heavily informed their perspectives on the situation in Syria.

Yet as early as 2013, Tunisia’s government began backpedaling on its principled stance on Syria. Both internal and external factors were at play. Tunisia’s rocky post-revolution experience was shaped not only by local acts of jihadist terrorism, but also by the fact that thousands of Tunisians went to Syria to fight for ISIS and other extremist groups. This led officials in Tunis to reconsider which actors in the Syrian crisis posed the greatest threat to Tunisia’s security and long-term interests. Additionally, the gains made on the ground by the Syrian Arab Army (SAA), with backing from Iran and Russia, dimmed the prospects for the revolution’s success, further prompting a shift in Tunisia’s position from an idealist to a more realistic approach.

Against this backdrop, certain groups and individuals in Tunisia — primarily anti-Islamist, secular, Arab nationalist, and Communist elements — expressed solidarity with the Syrian regime and Hezbollah after the Iranian-sponsored Lebanese militia intensified its direct intervention in the civil war in May and June 2013. As these segments of society grew increasingly anti-Qatari due to Doha’s ties with Ennahda and Al Jazeera’s alleged pro-Muslim Brotherhood bias, they promoted a narrative that both Tunisia and Syria were suffering from Qatari-sponsored Islamist terrorism.

By 2015, Tunisia’s foreign minister stated that Tunis and Damascus had plans to restore diplomatic ties at a consular level. In April 2016, nearly two years after ISIS’s rise to power in eastern Syria and western Iraq, Tunisian officials announced the reopening of a consulate in Syria and extended an invitation to Syria’s ambassador to return to Tunis. However, the government was keen to emphasize that this decision was only due to its interest in tracking the 3,000 Tunisians who travelled to Syria and Iraq to join ISIS. The previous month Tunisia suffered one of the worst terrorist attacks in its history when two Libyan-trained Tunisian militants killed 21 foreigners at the Bardo National Museum in Tunis. In the aftermath of the attack, the Tunisian leadership determined that not having a consulate in Syria was a security risk, and that opening one would enable Tunis to share information with the regime in Damascus about the threat posed by radicalized Tunisians who had gone to the Levant to join the ranks of groups like ISIS.

As other Arab states, including Bahrain, Jordan, Sudan, and the United Arab Emirates (UAE), move to normalize relations with Syria, elite circles in Tunisia are calling for Tunis to follow suit. Late last year, Tunisian Foreign Minister Khemaies Jhinaoui declared, “The Syrian government has started to recover and to restore its security after eliminating several terrorist groups. When the dust settles, we will make the necessary decisions to restore the deep-seated Syrian-Tunisian ties.” He went on to criticize the decision to sever relations with Damascus in 2012 as short-sighted and said it was taken without considering the impact on Tunisians living in Syria.

Jhinaoui’s statement followed remarks from Munji Herbawi, the spokesperson for the self-styled secularist, technocratic, and center-left party Nidaa Tounes, who said his party embraces Syria’s return to the Arab League and is “convinced that Syria was facing a dirty and unjust war and that the Syrian regime was right.” Nidaa Tounes parliamentarian Abdul Aziz al-Koti paid an unofficial visit to Syria in March 2017, met with Assad, and assured the Syrian leader that his party is pushing for a rapprochement between Tunis and Damascus.

Ennahda, too, is coming to terms with the facts on the ground in Syria and has signaled its support for accepting Assad’s government back into the diplomatic fold. Yet the party’s officials, unlike their counterparts in Nidaa Tounes, continue to affirm their moral opposition to Assad. On Jan. 3, Ennahda leader Rached Ghannouchi signed a statement that called for “comprehensive national reconciliation that would give the Syrian people back their right to their land and to a democratic life, that would end the fighting and the resulting humanitarian tragedies, and give Syria back its natural place in international and Arab organizations.”

Another figure within Ennahda, Zubeir al-Shuoudi, emphasized that Tunis’ evolving position toward Damascus is a result of political factors and realities on the ground. But despite the party’s support for close coordination with the Arab League on efforts to readmit Syria, Shuoudi stressed that the resumption of diplomatic ties does not change Ennahda’s view that Assad has ruled tyrannically and is guilty of large-scale human rights violations.

Further evidence of the thaw in relations between Tunisia and Syria came on Dec. 27, when Syrian Cham Wings Airlines resumed flights to eastern Tunisia following a seven-year hiatus. That same day, both Bahrain and the UAE reopened their diplomatic missions in Damascus, a major victory for the Syrian regime given Manama and Abu Dhabi’s close alignment with Riyadh.

Despite some setbacks, Tunisia seems set to maintain its post-Arab Spring progress, even as neighboring Libya is beset by civil war and Algeria faces the prospect of more stagnation at the top after its upcoming presidential elections. For Tunisia, the lessons learned since the Arab Spring inform the debate over Damascus’ reintegration. Tunis is trying to capitalize on its current democratic development in the post-2011 era while seeking to help influence the outcome of post-conflict Syria. In the near future, Arab Gulf monarchies are likely to apply pressure on Tunisia to influence its relations with Syria. The sheikdoms of the Arabian Peninsula — with the notable exception(s) of Qatar and possibly Saudi Arabia — will aim to facilitate a smooth reincorporation of the Assad regime into the regional order, yielding results in line with their interests and concerns. Naturally, European states are also closely monitoring this re-engagement, a factor which may have a balancing effect, given the general anti-Assad sentiment in Europe over his extreme human rights violations. Nevertheless, the centrifugal forces that are pulling Syria back into the Arab fold seem set to continue going forward, and Tunisia will likely play an important role in the process.

Dr. Theodore Karasik is currently a senior advisor to Gulf State Analytics, an adjunct senior fellow at the Lexington Institute, and a fellow in Russian and Middle Eastern Affairs at the Jamestown Foundation in Washington, D.C. He is also a consultant for the National Council for US-Arab Relations in Washington, D.C. The views he expresses are strictly his own.

Giorgio Cafiero is the CEO and founder of Gulf State Analytics, a geopolitical risk consultancy based in Washington, D.C. The views he expresses are strictly his own.