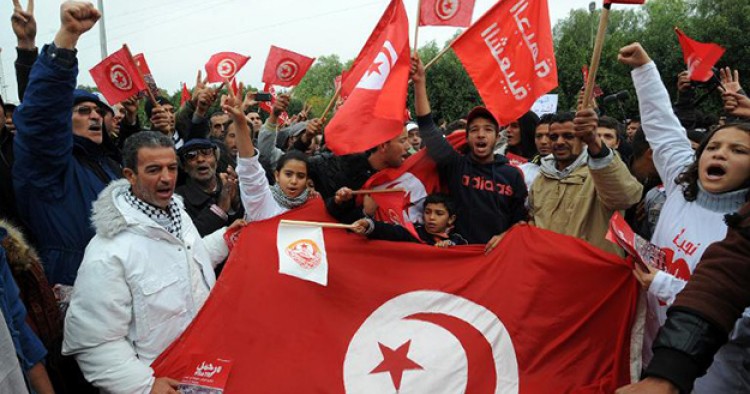 Since the “Arab Spring,”[1] international actors have considered Tunisia an exemplar of democratic transition in the Arab world.[2] But this optimism is increasingly being replaced by fear and frustration, especially within Tunisia itself. Transitional justice—dealing with the crimes committed by previous regimes—is one of the subjects of debate.

Tunisia has a long history of repression. The first Tunisian president, Habib Bourguiba (1956–1987), was responsible for a culture of severe repression of political opponents. His main adversaries were the Youssefists (those who supported the pan-Arabist Salah Ben Youssef in his power struggle against Bourguiba when Tunisia became independent),[3] the leftists,[4] and the Islamists.[5] An example of this repression was evident in the case known as Baraket Essahel, in which army officials were arrested on suspicion of plotting a coup d’état and subsequently tortured.

This situation did not change after 1987, when Zine el-Abidine Ben Ali took power. Despite his discourse of human rights and political pluralism, Ben Ali did not introduce political freedom. The opposition, generally divided into Islamists (such as Ennahda) and the left (such as human rights activists, communists, and liberals),[6] faced harassment, imprisonment on false grounds (such as drug possession), and torture.[7] The Ministry of the Interior, with its national guard, became the most powerful actor in this respect. A telling example is the case of Taoufik Ben Brik, a Tunisian journalist who was known for publicly criticizing Ben Ali. When he announced that he would run in the presidential elections in 2009, he was arrested. But, as was usually the case, his arrest did not occur without a credible scenario put in place. When Ben Brik went to pick up his daughter from school, his car was blocked by a female police officer in plainclothes. When she stepped out of the car, she tried to provoke him and later claimed that he had hit her. She filed a complaint for harassment, and Ben Brik was sentenced to six months in prison.[8]

The situation before the revolution of January 2011 can thus be summarized as one of oppression of a wide spectrum of groups, resulting in an accumulation of grievances among various segments of society. After the revolution, it became clear that each faction would have its own perspective on the “wounds of the past” and how to address them.

The demonstrations that followed Mohamed Bouazizi’s self-immolation on December 17, 2010 were directed against economic and social malaise, but also called for human rights and democracy.[9] The protestors faced a violent crackdown, as sharpshooters aimed at the demonstrations with real bullets. It is estimated that over 300 people were killed and around 2,000 were injured.

On January 14, 2011, Ben Ali fled the country, and the government increasingly rid itself of members of the previous regime. The former ruling party, the RCD,[10] was suspended, as was parliament. Previously prohibited political parties such as Ennahda and the communist PCOT[11] were legalized and elections were held on October 23, 2011. Ennahda obtained 40 percent of the vote[12] and became the largest party in the Constitutional Assembly, whose mandate was to draft a constitution and to govern the country until the next elections. Ennahda, in a coalition with liberal parties Ettakatol and CPR,[13] comprised the government.

As for dealing with past crimes, the following measures were put in place: political prisoners were released on the grounds of an amnesty law;[14] high-ranking officials and family members of the former president were arrested and put on trial;[15] and a transitional justice ministry was put in place.[16] Two truth commissions were installed, one to investigate serious cases of corruption and money laundering, and the other to investigate what had happened behind the scenes politically between December 17, 2010 and the first elections.[17] A technical committee was appointed to draft a law on transitional justice.[18] Despite these achievements, the debate on dealing with past crimes has become explosive in Tunisia.

Obstacles to Resolving the Past

The reception of a law concerning the amnesty of political prisoners is characteristic of the current debate. When the Minister of Human Rights and Transitional Justice, Ennahda member Samir Dilou, proposed indemnifying former political prisoners, the reaction was that the project would merely benefit Ennahda members, since those released after the revolution were mainly Islamists.[19] There were protests in front of the Constitutional Assembly, numerous critical articles appeared in the press, and the law became a topic of everyday discussion for specialists and lay people alike. In the end, the minister of finance resigned and the law was never issued.

Another example of the explosive character of dealing with past crimes concerns the events on National Martyrs’ Day (April 9, 2012).[20] Many were angered by the delay of the political truth commission in putting together a report on the shootings during the revolution,[21] and they organized a demonstration on Martyrs’ Day to demand attention for those killed and their families. The new Minister of the Interior, Ennahda member Ali Laarayedh, prohibited the protest and put a large police presence in place. When some of the protesters ignored the interdiction, the police acted quickly and violently. Demonstrators were arrested and some were even wounded. This government action was understood as a refusal to recognize the victims and heroes of the revolution. It became prominent in a growing list of grievances against the regime, especially Ennahda, damaging the legitimacy of the latter.

Tunisians principally angered with the transitional justice process have been those in the interior of the country, where the revolution started. The victims of the shootings and their families blame the regime for stalling the process and not taking them seriously. Similarly, leftist militants are angered by the lack of recognition of their victimhood. But the group of those aggrieved is much larger: transitional justice became a point of grievance for all those who did not support the Ennahda-led regime, including those who were not direct victims of the previous government and those who “belonged”[22] to it. The critique of how the government was dealing with past crimes was mainly directed at Ennahda, despite the fact that the government consisted of three coalition partners. The debates thus revealed a schism that, although long present, became visible after the revolution. It is an ideological or identity-based antagonism that touches upon much more than transitional justice alone.[23]

The Struggle for Legitimacy

When looking at the contents of the debates, it appears that they mostly centered on the recognition of victimhood, particularly who gets to decide who the victims are. It was to be expected that any decision on transitional justice taken by a government led by Ennahda would raise suspicion with the other factions as being “winner’s justice.”

Underlying the accusation that Ennahda only recognizes its allies as victims was not only the idea that it granted them financial benefits that were denied to others who also had a right to them. There was also the important issue of political legitimacy intertwined with victimhood. Emphasizing the victimhood of Islamists clearly boosted Ennahda’s legitimacy. At the same time, downplaying the victimhood of the left and the martyrs of the revolution harmed the legitimacy of the latter.

Post-revolution optimism in Tunisia has been increasingly replaced by frustration about many issues, including dealing with past crimes. The many factions that consider themselves victims of the previous regime have different understandings of transitional justice, and when one of these—Ennahda—came out of the first elections as the winner, its decisions on transitional justice were criticized.

The coalition of Ennahda, Ettakatol, and CPR lost so much legitimacy that it was replaced by a government of technocrats. Thus, even if Ennahda was successful in convincing a substantial part of Tunisia of its victimhood, it was not sufficient to stay in power. On the contrary, it appears that being a victim of the previous regime is becoming less important in the political transition. In fact, instead of dealing with the past as a means to leave the authoritarian regime behind, a prominent member of the former regime, the lawyer Béji Caïd Essebsi, is becoming a dangerous rival for Ennahda.

[12] Meaning that 20 percent of Tunisians voted for Ennahda, as only 50 percent of those eligible to vote did so.

[14] They were released on a provisional decree awaiting a more comprehensive ruling on transitional justice (18 February 2011). This decree is inspired by the law of 1988 in which Ben Ali ordered the release of political prisoners, specifically Islamists, from Bourguiba’s regime.

[15] Specifically family members of the president and his wife, as well as former Minister of the Interior Abdallah Kallel and Ben Ali’s Security Chief Ali Seriati. Ben Ali and Leila Trabelsi were put on trial in absentia.

[20] On this day, Tunisians commemorate the victims of a violent crackdown on a demonstration against the French occupation on April 9, 1938.

[21] The report was to establish a final list of victims that would give a right to indemnification; it was also expected that it would point to those responsible, who could then be held responsible. The report, التقرير or Taqrir, which did not give many final answers, was presented on May 4, 2012. It is available (in Arabic) at http://www.leaders.com.tn/uploads/FCK_files/Rapport%20Bouderbala.pdf.