Travels beyond Gurnah: Migration in the work of Ali Al-Sharji and Shaima Al-Tamimi 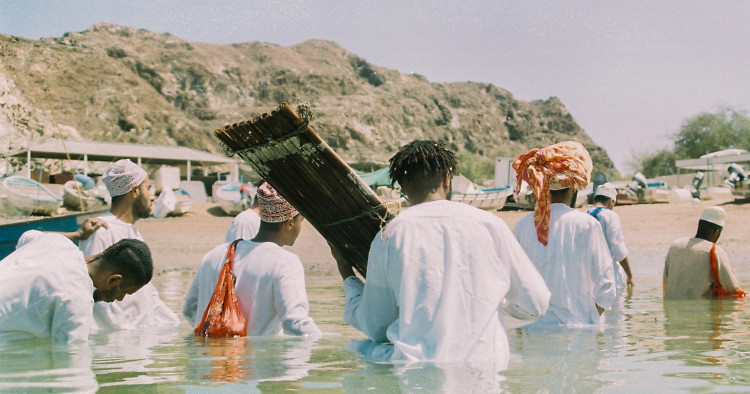 When Abdulrazak Gurnah was awarded the Nobel Prize in Literature in October, he and his novels came under the international spotlight. The award committee praised his “uncompromising and compassionate penetration of the effects of colonialism and the fates of the refugee in the gulf between cultures and continents.” Though Gurnah had been publishing his work since the 1980s to some acclaim, he had never become a household name. This dramatically changed when he received the prestigious award and became “the most talked-about writer in the world.” As an editorial by The Guardian recently put it, “If one of the roles of the Nobel prize for literature is to shine a light on someone who has been less visible than they warrant, then that role was fulfilled this year in the announcement of Abdulrazak Gurnah as winner.”

During his literary journey, Gurnah wrote 10 novels that tackle themes such as migration, displacement, belonging, alienation, and loss — themes that are increasingly relevant in the context of the ongoing refugee crises. Although the stories that Gurnah crafts have universal appeal, his works are set wholly or partly in East Africa — predominantly Zanzibar — and frequently involve migration to the United Kingdom, following turbulent political and personal experiences in the African continent. One such event that is often at the gravitational center of his works is the violence that followed the 1964 Revolution of Zanzibar, during which centuries-long Omani rule was overthrown and approximately 17,000 people of Arab descent were killed (though the precise number has been disputed), as well as Africans and those of South Asian descent. The mass killings resulted in the flight of thousands of Zanzibaris of Omani, Hadhrami, Yemeni, Persian, and South Asian descent (in addition to others) who had formed a portion of the population; they left for countries such as Oman, Yemen, the United Kingdom, and (what would later become) the United Arab Emirates, in risky journeys that resulted in many deaths. Gurnah, himself a Zanzibari of Yemeni descent, was a teenager who witnessed this chapter of Zanzibar’s history. In an article he penned in 2001, he recalled that, “Thousands were slaughtered, whole communities were expelled and many hundreds imprisoned. In the shambles and persecutions that followed, a vindictive terror ruled our lives.” When Gurnah turned 18 a few years after the killings, he and his brother fled to the United Kingdom, where he faced discrimination and lost his sense of place in the world. Out of Gurnah’s trauma of departure and arrival, however, powerful literature was born as he attempted to fathom experiences that left a lasting impact on him. For example, he starts his novel Admiring Silence with the following:

“I have found myself leaning heavily on this pain. At first I tried to silence it, thinking it would go and leave me to my agitated content. That it would linger for a season, a firm reminder of the disquiet that lurks and coils below the surface of the stubbornly self-gratifying vision of our lives. Far from going, it became more clear, more precisely located, concrete, an object that occupied space within me, cockroachy, dark and intimate, emitting thick, stinking fumes that reeked of loneliness and terror. When I woke up in the morning, I groped for it, then sighed with plunging recognition as I felt it stirring inside me, alive and well.”

But Gurnah is not the only son of Zanzibar whose art has been shaped by the memories of migration, and his recent recognition is an occasion to highlight and reflect on creative work in different media by individuals of similar backgrounds who have also been shaped by the trauma of forced departure.

Conceptual photographer Ali Al-Sharji’s work From Home to Home is one such example. The photography of the 28-year-old artist, who is of Omani, Burundese, Rawandan, and Zanzibari heritage, depicts an elderly man sitting on a chair by the beach and looking at the sea, where tens of men emerge from the water carrying drenched loads over their heads. It is “a metaphor of an elderly man reflecting back into his memory on the days he was escaping back home [to Oman], from home [Zanzibar],” Al-Sharji explained when I interviewed him. It depicts “his thoughts about whatever happened to everyone who was on the journey back home with him, and what have they come to be.”

This work was showcased in New York as part of an exhibition organized by the Los Angeles-based SEPIA Collective for the Black Panther Party’s 50th anniversary. It was born out of the tales he continues to hear from his elders, some of whom had lived in Zanzibar, but were driven to return to their ancestral homeland, Oman, because of the violence that began in 1964. “Today, many of our elders have stories of how they almost never made it back home, and some tell stories of how much they have suffered and lost,” Al-Sharji said. He was driven to explore photography as an outlet for the dark thoughts and emotions he experienced from childhood. When asked about why he chose to portray this historical occurrence in his work, the young artist replied: “For me, as an Afro-Arab, I needed to talk about something that would speak to me and for those who share the same ethnic background. ... From Home to Home does not only talk about the Arab massacre; it is a story of belief and faith in what the future holds.” Al-Sharji’s family and friends took part in the shoot in Haramil, a village located in Oman’s capital city of Muscat.

Qatar-based visual storyteller Shaima Al-Tamimi has also used photography, as well as film, to create work that reflects her familial experiences and the experiences of those who share a similar background. “I wanted to make sure that when I’m working on a [visual] project ... that people from that community are able to see themselves [in it]. ... We don’t really see ourselves a lot on television or in stories or on the big screen,” she said during our discussion.

Her latest work, an award-winning short film titled "Don’t Get Too Comfortable," debuted at the Venice Film Festival at La Biennale di Venezia earlier this year. In the film, the 37-year-old Yemeni-Kenyan reads a letter, as a collection of photos comes into view, that she had written to her late paternal grandfather, a Yemeni restaurateur who migrated to and settled in Zanzibar in the first half of the 20th century, where Al-Tamimi’s own father was born and raised. Al-Tamimi updates her grandfather on her and her immediate family’s life 50 years after his death in Yemen, where he and his family had migrated after the violence that erupted in 1964. Despite witnessing the killings firsthand and “miraculously” escaping them, as Al-Tamimi describes, her father returned to Zanzibar four years after his father’s death in search of better opportunities. He then moved to Kenya for similar reasons, where he got married, and then left for the United Arab Emirates, where Al-Tamimi was raised.

Her family’s generational migratory history, leading to her own migration to Qatar a decade ago, left the visual storyteller with myriad questions about belonging and home. “I’ve been thinking of who I am, how much of you I am, and our journey as Yemenis,” she states at the beginning of the film, as photographs of objects from Yemen and East Africa appear on the screen. Al-Tamimi obtained many of these objects from her family’s archives, which she rummaged through when she was working on the film. These include her father’s migratory suitcase as well as the ticket that her grandmother used to leave Zanzibar by sea in 1964. “It’s one thing to hear those stories, and another to see objects that belonged to that time that prove that this wasn’t just in my imagination. It was real. It happened, and it’s forever a part of this trauma that keeps manifesting or finding its way into the next generation,” she says. Though Al-Tamimi finds solace in her family members while making sense of their collective experiences, her work expresses constant feelings of displacement, loss, and fatigue. “How did we get to this point? I’m tired of feeling like a foreigner everywhere I go, of living in limbo, stuck in the past with the responsibility of a future, of being neither here nor there, time and time again. … Here we are, generations later, continuously thinking about where to go next, when our time is up,” she concludes her film by saying as a Swahili song begins to play in the background.

Fifty-seven years later, the mass killings that followed the revolution continue to occupy Gurnah’s mind and shape his writing. Traumatic experiences are expected to have a deep impact on the lives of those who experience them firsthand, such as Gurnah; but they also seep into the lives of the next generations, who did not experience them directly, such as in the cases of Al-Sharji and Al-Tamimi, who have processed inherited trauma in similar ways, even if they arrive at different conclusions. Its presence in their creative work is a testament to the potent hold of trauma and forced migration on the descendants of those who experience them.

Sharifah Alhinai is the founder of Khaleeji Art Museum, where she serves as the director, and the founder of Sekka Magazine, where she serves as the managing editor. She is a graduate of the University of Oxford and the School of Oriental and African Studies, and is the recipient of the Arab Woman Award 2020. She tweets at @sharifahalhinai. The opinions expressed in this piece are her own.