Tunisia in the Midst of the Islamist Civil War 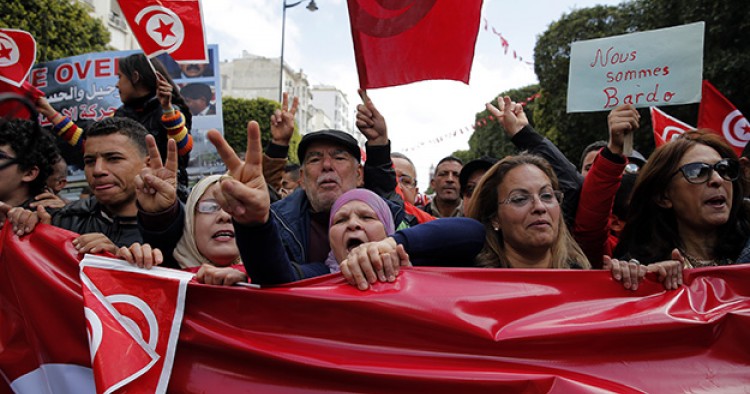 At face value, the targets of the Bardo Museum attack on March 18 in Tunis were Tunisia and the West, the former as the sole survivor of the “Arab Spring,” a country that has been successful in bridging the transition toward a democratic order, and the latter as the foe that radical Islamism seeks to defeat and supplant. A more extreme secular reading of the event may even see in it a punishment for Tunisia for having denied Islamist parties the coveted electoral victory and a reminder that, even from the margins, Islamism will dictate the course of the nation. Considered from within the Islamist context, however, the attack is another salvo in an intra-Islamist civil war, with Tunisians and Westerners as collateral damage.

From Yemen to Syria, Afghanistan to Tunisia, the Islamist civil war is global. Three main protagonists are engaged in it in Tunisia, with distinctly different approaches on method and increasingly divergent views on the end goal.

The first is Ennahda, a political party rooted in the accommodationist Islamism of the Muslim Brotherhood (MB), which calls for Islam as a political framework and for democracy as a process. As a political movement evolving out of the underground, Ennahda has engaged in self revisions, underlining its affiliation with Tunisia’s own religious reform movement, highlighting its liberal credentials, and demarcating itself from violence and radicalism. The result, from a sympathetic point of view, is the first genuine Islamist appropriation of democracy beyond the instrumentalization of its forms, which has seemed to characterize the Egyptian MB. A more skeptical assessment would see much incoherence and perhaps dissimulation in Ennahda’s approach among its reform, moderate, and conservative wings. Ennahda is indeed subjected to pressures from opposing sides of the political spectrum, with non-Islamists and secularists accusing it of serving as a front for extremism and radical Islamists viewing it as an extension of the secularist order.

The second player is al-Qa‘ida, until recently the standard-bearer of Islamist radicalism in its rejection of any political order not in compliance with its (unspecified) notion of an Islamic state. While rejecting accommodationism, even in its “gradualist” version—that is, the adoption of democracy as the means to educate and elevate the public toward a non-democratic Islamic order—al-Qa‘ida’s lack of clarity on its end purpose is based on the implicit understanding that the emergence of the Islamic state is a long process in which the public is mobilized for an Islamic revolution. As such, al-Qa‘ida accepts a degree of gradualism, but solely outside of the political system. In the aftermath of the Arab Spring, it has engaged in a reassessment of its intransigence, concluding that it is a counterproductive trait in the call to the Islamic order. Influential ideologues in line with al-Qa‘ida have thus suggested adopting a grassroots approach more responsive to the sensitivities of the local population.

The unofficial affiliate of al-Qa‘ida found in Tunisia after the 2011 revolution, Ansar al-Shariah, represented the embodiment of al-Qa‘ida’s reconsideration, with a nominally apolitical mission of social and religious service aimed at confirming its Muslim identity and practice and rejecting the legitimacy of the non-Islamic government, but officially avoiding a direct confrontation with it. Ansar al-Shariah, however, seemed incapable of resisting the temptation of violence, and was implicated in the political assassinations of secular figures. Its effective dissolution came as a result of a concerted security effort on the part of the Tunisian government and its regional and international allies, but also of the severe attrition of its membership toward extremist formations in Syria, Iraq, Libya, and Algeria, both under the al-Qa‘ida banner and outside of it.

The third actor is the Islamic State (ISIS). While sharing the same ideological roots of al-Qa‘ida, ISIS diverges on methodology. If the MB seeks the establishment of the new order through elections, and al-Qa‘ida opts for revolution, ISIS sees territorial conquest as the means to achieve it. Irredentist and uncompromising in the application of the tenets of radical Islamic theology, ISIS aims for the immediate realization of the Islamic order. Appealing to a new generation of sympathizers, ISIS has depleted al-Qa‘ida’s soft constituency—its online support networks—and is actively seeking to acquire its hard assets through al-Qa‘ida franchises in the devastated parts of the Islamic world.

ISIS has accepted the allegiance of offshoots of al-Qa‘ida’s affiliates in Algeria, Egypt, Yemen, and Afghanistan. The real prize that ISIS is pursuing, however, is the integration of the main affiliates themselves, al-Qa‘ida in the Islamic Maghreb (AQIM) and al-Qa‘ida in the Arabian Peninsula (AQAP).

The Bardo Museum attack, even if opportunistic in character, is best viewed in this light. By upstaging al-Qa‘ida in extremism, while subjecting Ennahda to further pressures from non-Islamist forces that accuse it of collusion with terrorists, ISIS contributes to the polarization and radicalization of Tunisian politics and presents a refuge and a more consistent model to Tunisia’s radical activists. In return, the disarray in Ennahda and the eclipse of al-Qa‘ida in Tunisia, compounded with the success of ISIS at exploiting the disintegration of Libya, offer ISIS improved odds in securing AQIM’s allegiance.

In North Africa and Yemen, ISIS has pointed to the respective inability of AQIM and AQAP to establish a sustainable presence. While AQAP had achieved tangible results in securing territory, its alignment with al-Qa‘ida’s new rules of conduct manifesto—requiring affiliates to avoid excessive civilian casualties and making theological differences a lesser priority—offered ISIS the opportunity to recruit ultra-radical factions unsatisfied with the so-called “al-Qaida New Look.” However, AQAP featured a charismatic leader, Harith al-Nadhari, with unquestioned radical credibility and persistent allegiance to al-Qa‘ida Central.

On January 15, al-Nadhari was killed by a U.S. drone strike, leaving AQAP more vulnerable to ISIS recruitment. In fact, whether in Iraq, Syria, or Yemen, ISIS has been able to leverage U.S. military action in order to derive considerable advantage in the Islamist civil war. As the force of Islam standing against a global coalition, ISIS gained in appeal in international jihadi circles, earning it increased numbers of recruits and material support while it engaged in even harsher treatment against its detractors, now presented as allied with the United States.

In Egypt, ISIS has manipulated the Egyptian military’s iron fist to propose a new narrative of a victimized Sinai, appealing to tribal loyalties and regional differences and succeeding to some degree in deepening its presence in the peninsula.

While the temptation to emulate the Egyptian model of combating radicalism may be hard to resist, and while the need for global support to face the threat of jihadism may be growing, Tunisia is equipped to offer through national unity and the rejection of reductionist accusations a third course in addressing the savagery imposed on it. ISIS excess is designed to summon a polarizing outraged reaction through which secularists confirm their rejection of Islamic politics and mild Islamists are torn in defense and apology. In the evolution of its political culture since the 2011 revolution, Tunisia has demonstrated the ability of both Islamists and secularists to accept the permanence of diversity. Through the confirmation of the primacy of civil peace and the rule of law, and the avoidance of disproportionate security measures, Tunisia will be able to absorb and overcome the toppling of its still fragile democracy, as sought by the terrorist attack. Such a course would deny extremism the opportunity to propagate and would confirm Tunisia as the exemplar of a possible success in a degenerating region.