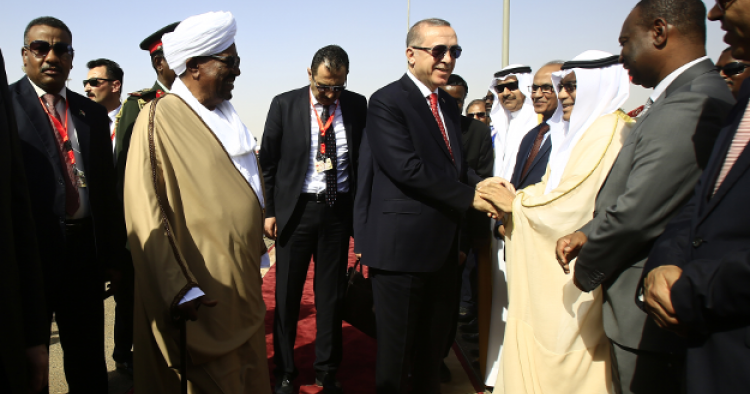 While in Khartoum, Erdogan and his Sudanese counterpart, Omar Hassan al-Bashir, signed 13 deals worth $650 million, which will lead to a new airport and free-trade zone in Sudan’s capital and main port, numerous grain silos, power stations, plus a new hospital and university. Turkey and Sudan have set out to increase bilateral trade 20-fold.

Ankara and Khartoum have also agreed to have Turkey temporary control and rebuild Suakin Island, which belonged to the Ottoman Empire from the 15th to 19th century—yet has been abandoned for the past century—and where there are now plans for the Turks to build a port and berths. This port in northeast Sudan may soon serve both Ankara’s military and civilian purposes while offering more Muslims in Africa access to Mecca as Turkey attempts to gain financially from the hajj and umrah industry.

Suakin Island, despite being under Ottoman rule for hundreds of years, has deep historic links with Jeddah, rooted in ancient trade links that connected Africa to the Arabian Peninsula and India. Indeed, Turkey’s new Red Sea foothold may create new friction in Saudi-Turkish relations. Making religious tourism more profitable for the Saudis is a pillar of Vision 2030 and with officials in Riyadh planning to generate more than $150 billion revenue from the hajj and umrah by 2022, the kingdom will likely see Turkey’s moves as cutting into Saudi Arabia’s profits.

Ultimately, Khartoum opened the gate for Ankara’s entry into the Red Sea to counterbalance the negative economic and political consequences of unresolved problems in U.S.-Sudan relations while further diversifying Khartoum’s military partners as the Bashir regime continues to fight rebels in Darfur and other parts of the country. From Ankara’s perspective, Turkish control of Suakin Island advances Turkey’s quest to establish a more robust military presence abroad, highlighted by Turkey’s other two bases in Somalia and Qatar. The historical nature of Suakin Island under Ottoman rule resonates with the AKP’s leadership as a projection of Turkish hard power on the global level and an opportunity to expand soft power throughout Africa and beyond.

Although the Sudanese leadership affirmed that the Turkish foothold in the saltwater inlet will threaten no Arab state, certain regional actors—chiefly Egypt, Saudi Arabia, and the United Arab Emirates—view Turkey’s aspiring role in eastern Sudan negatively. Cairo, Riyadh, and Abu Dhabi’s maritime strategies are focused on building up robust maritime security capabilities with interdiction operations to halt illicit trade and weapon smuggling. While Turkey has been an able counter-piracy partner in the Gulf of Aden, a permanent Turkish naval presence in a hyper-charged Red Sea security environment may not foster cooperation between Ankara and Arab states bordering the body of water.

Amid potential realignment in the region, the strengthening of Turkey and Qatar’s alliance constitutes a troubling geopolitical development for the quartet of Arab states which cut off ties with Doha in June 2017—Saudi Arabia, Egypt, UAE, and Bahrain. Sudan’s “neutrality” in the Qatar crisis, coupled with Bashir telling Russian President Vladimir Putin that Sudan would oppose any war against Iran, has left some the quartet nervous about Khartoum moving into alignment with this Ankara-Doha axis. Indeed, Qatar’s high-ranking officials visiting Sudan around the time of Erdogan’s visit to Khartoum certainly stokes suspicions that Sudan is shifting further away from Riyadh and Abu Dhabi.

Illustrated by the quartet’s 13 demands set forth as the bloc’s conditions for resolving the Gulf Cooperation Council crisis, Egypt and the UAE share a negative outlook toward Turkey’s base in Qatar and now view a future Turkish base in Sudan as yet another security threat. Cairo and Khartoum’s diplomatic spat shortly after Erdogan’s Sudan visit underscores this delicate dynamic in the Red Sea’s balance of power. Officials in Cairo fear that Khartoum, with a Turkish military presence in Suakin Island, could feel emboldened enough to make an aggressive move vis-à-vis the Halayeb Triangle border area, a plot of Red Sea coastal territory under Egypt’s control, which Cairo and Khartoum have disputed for many decades. Egypt reportedly deployed its military forces to waters near the disputed border area in 2017. Simultaneously, as Sudan is home to Egyptian members of the Muslim Brotherhood, which Turkey supported during Mohammed Morsi’s presidency, Cairo is unsettled by the prospects of Ankara cementing influence in Egypt’s southern neighbor.

Turkey’s move is indicative of a wider trend as other Middle Eastern and extra-regional powers are racing to establish military bases or an operational presence in the Red Sea. Israel has a naval base in the Red Sea’s northern tip, at Eilat. Egypt, with the strongest Arab army, has four Red Sea bases. The UAE has a base in Eritrea and ports in Yemen. Saudi Arabia’s Red Sea coastal city Jeddah is the location of the King Faisal Naval Base. According to Israeli officials, Iran has used Eritrea’s Assab port for funneling weapons through African and Arab states. Djibouti hosts military installations of several countries, including China and Japan, which have their only foreign military bases in this African country, along with France, Italy, Spain, the United Kingdom, and the United States.

Bashir and Putin’s November 2017 meeting in Sochi along with plans for a Russian military base on Sudan’s Red Sea coast have added Moscow to the list of capitals focused on projecting hard power in this body of water. The Russians see the Turkish foothold in Suakin Island as a net positive for Moscow’s future maritime strategies in the Red Sea as U.S.-Turkey relations continue to deteriorate.

Already roughly one-tenth of global maritime trade traverses the Red Sea, and given China’s One Belt, One Road initiative coupled with growing demands from other energy-thirsty populations in Asian countries experiencing demographic growth like India, the Red Sea is set to become increasingly busy with traffic while serving as a gateway between Europe and the Far East. The Red Sea basin’s population is set to double by 2050, and provided that Africa’s trade with other continents has nearly doubled throughout the 21st century, Red Sea ports that link multiple continents are likely to be increasingly valuable both economically and geopolitically.

The Red Sea will likely become a theater for intensified geopolitical competition between regional and global actors with clashing agendas and growing interests in securing leverage vis-à-vis the Middle East’s most geo-strategically vital waterways. Turkey’s entry into this body of water raises new questions for Arab states with high stakes in the Red Sea security environment.

The future for the US and Turkey