U.A.E’s Reformed Foreign Ministry a Pioneer in the Region 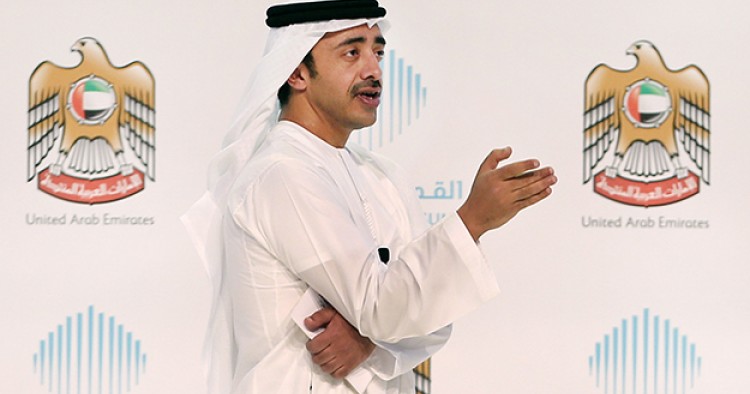 When Dubai Ports World made an offer in October 2005 to purchase ports manager P&O, it did not imagine the deal would unleash a firestorm of bipartisan wrangling in the United States. The P&O purchase would have resulted in a Middle Eastern firm managing six U.S. ports including those in New York, Newark, Baltimore, and Miami, which some senators found to be unacceptable. While D.P. World, as it is known, was prepared for scrutiny on financial and security levels, it was the political battle that the company and its home base country, the U.A.E., had to face. Congressional Democrats found an opportunity to challenge then-President George W. Bush after what some regarded as a docile few years following the 9/11 terror attacks in which Republican policies went largely unchallenged. Internal U.S. dynamics led to heated rhetoric and hyperbole. "We wouldn't transfer the title to the devil; we're not going to transfer it to Dubai," said one Democratic senator, adding that the deal amounted to an “occupation.” Not to be outdone in their patriotism, Republicans also upped the ante and by March 2006, D.P. World agreed to relinquish control of the U.S. ports.

Although commercial in nature, the D.P. World incident was a tipping point for Emirati diplomacy. What the U.A.E. government realized was that its global outreach was inadequate and unsuitable for the fast-paced 21st century. Serious steps had to be taken to make sure there was no repeat of such incidents. In February 2006, at the height of the ports controversy, a major U.A.E. cabinet reshuffle was announced and the young Abdullah bin Zayed, then only 33-years-old, was appointed foreign minister. For Sheikh Zayed and his incoming team, the D.P. World deal presented an opportunity to reform the institution, and U.A.E foreign policy has since seen a dramatic shift in an attempt to match the country’s global ambition.

Sheikh Abdullah’s tenure focused not only on traditional avenues of diplomacy, but for the first time incorporated the country’s soft-power tools. The first steps involved internal housekeeping and getting the facts straight about the country. A report was commissioned that tallied the aid U.A.E. has given since its founding in 1971, an essential element of soft power. The numbers were staggering; for such a small state, the U.A.E. has donated $47 billion in its first 44 years of existence, not including charity by citizens and residents. In fact, the U.A.E. has exceeded the U.N.’s recommended target of 0.7 percent of G.N.I. for developmental assistance by donating 1.34 per cent in 2013. Recognizing the monumental task ahead, Sheikh Abdullah appointed four assistants to cover political, economic, legal, and special affairs alongside the capable Cambridge-educated minister of state for foreign affairs, Anwar Gargash. Additionally, the foreign ministry embraced social media with the minister himself engaging 3.8 million followers on his ‘personal’ Twitter account. Moreover, diplomats-including those in the U.A.E. embassy in Washington-proactively prepared detailed briefing folders for visiting officials in order for them to better navigate the complex U.S. political landscape.

Two events in the recent past exemplify the globalist public diplomacy and energized prowess of the U.A.E.’s foreign ministry. Back in 2009, the U.A.E. launched a two-year campaign to host the offices of the International Renewable Energy Agency. There was certainly stiff competition from established countries to play host, among them Austria, Germany, and Denmark. The foreign ministry went into overdrive in the final four months leading to the June 2011 vote. Senior government officials, led by Sheikh Abdullah, Gargash, state ministers, Sultan al-Jaber, and Reem al-Hashimi visited dozens of member states and conducted intense negotiations to secure votes. The marathon negotiations lasted to the very last hours until, according to a WikiLeaks cable, the United States stepped in and brokered a deal with holdouts Germany and Austria. Under the terms of the agreement, Abu Dhabi would host IRENA, Vienna would host a liaison office, and Bonn would play host to an innovation branch. IRENA’s bid was historic in that it is the first international organization to be headquartered in the global South, rather than have having a secondary branch.

The IRENA experience prepared the U.A.E. for further challenges ahead, including in the lead up to the vote to host the World Expo 2020, this time in Dubai. The Emirati commercial hub was up against Yekaterinburg (Russia), Izmir (Turkey), and São Paulo. In the months before the November 2013 vote, the foreign ministry and its worldwide network of embassies organized events and young expo ambassadors were appointed from various countries. Even more remarkable was the margin in which Dubai’s bid outperformed others. In the final tally, Dubai scored an impressive 116 out of 163 votes, becoming the first Arab and Middle Eastern city to host the event in its 160-year history.

The U.A.E. Foreign Service corps has indeed come along way. Prior to the country’s independence in 1971, what was then-known as the Trucial States (in reference to the truce they had signed with Britain in 1820) resorted to the expertise of trained and seasoned diplomats to carry out their diplomatic outreach. For instance, Adnan Pachachi, born in 1923, was a former Iraqi foreign minister and then Iraqi ambassador to the United Nations before settling in the U.A.E. in the late 1960s and advising the country’s founding President Zayed bin Sultan Al Nahyan. Pachachi’s vast global diplomatic network facilitated the accession of the U.A.E. to the U.N. only days after its founding. There were fears that China and the U.S.S.R. would veto its entry due to objections from their allies in the Communist Party of Yemen, which opposed the creation of the U.A.E.

The foreign ministry also faced challenges in recruiting from a then-limited pool of technocratic citizens. The U.A.E.’s first ambassador to Britain, Mahdi al-Tajir, although stationed in London, also represented the country in continental Europe. Today, the U.A.E.’s foreign ministry can count among its cadres some of the most successful diplomatic technocrats in the region. Amongst them are Omar Ghobash, ambassador to Russia and author of the acclaimed new book Letters to a Young Muslim; Sulaiman al-Mazroui, who led the negotiations to attain Schengen visa waiver for Emirati citizens; and the skilful Yousef al-Otaiba, the ambassador to the United States who played a key role in facilitating the 2009 U.S.-U.A.E. Agreement for Peaceful Civilian Nuclear Energy Cooperation (123 Agreement) as well as elevating bilateral relations in various fields from trade to counterterrorism.

The U.A.E.’s diplomatic corps has also been targeted by opponents. In 1977, the first U.A.E. Minister of State for Foreign Affairs Saif Ghobash was assassinated, mistaken for visiting Syria’s foreign minister at the time Abdel Halim Khaddam. In 1984, the Emirati ambassador to France, Khalifa al-Mubarak, was assassinated outside his home at the age of 34. According to an AFP report “an anonymous caller to the news agency Agence France-Presse said the ‘Arab Revolutionary Brigades’ killed the diplomat ‘because of the links of his country with American imperialism.”’ The targeting continued well into the new century when a U.A.E. diplomat in Baghdad was kidnapped for a number of days in 2008, while in January 2017 five Emirati diplomats working on charity projects were killed when a terrorist targeted them in Afghanistan. Last year, the U.A.E. unveiled a memorial to honor those who died in the service of the country, including its fallen diplomats.

The U.A.E. foreign ministry is in continuous reform mode (it was renamed U.A.E. Ministry of Foreign Affairs and International Cooperation in February 2016). For example, it is moving currently toward a more gender-balanced allocation of posts—a standout in a region where men overwhelmingly dominate politics. Today, the U.A.E. has female ambassadors in Sweden, Spain, Montenegro, Finland, Denmark, and Latvia, as well as Lana Nusseibeh, the country’s permanent representative at the United Nations. In 2015, Hind al-Owais, an Emirati career diplomat, was appointed as senior advisor at the U.N. In 2014, Abu Dhabi established the Emirates Diplomatic Academy in order to train both junior and senior diplomats. From here on, no diplomat will be stationed abroad without the proper preparation and background in order to conduct his or her work. Classes include international relations diplomacy, history, leadership skills, and digital technology all for full-time as well as visiting staff. Furthermore, the foreign ministry has embarked on a mission to strengthen the standing of the U.A.E. passport, taking it from the bottom third to the top quarter of states with regards to visa-free travel. According to the Henley & Partners Visa Restrictions Index, the U.A.E. passport ranks as the “strongest” in the Middle East and North Africa, allowing visa-free access to 121 countries.

There is no doubt that the U.A.E.’s foreign policy, like the country itself, is on the rise. However, an active and globally engaging policy comes with increasing challenges and pitfalls. Increased on the ground charitable work, rather than mere financial donations, means that aid workers are vulnerable in conflict zones, as seen by the killings of U.A.E. diplomats in Afghanistan. Additionally, although the U.A.E. does not recognize Israel, it agreed to host an Israeli delegation as part of its commitments toward IRENA.

The reforms initiated at the foreign ministry following the D.P. World incident in 2006 allowed it to exceed expectations and has helped elevate the country’s standing more swiftly than most of its global peers. The ministry’s impressive work can serve as an example for other structural institutions in the U.A.E. looking to advance and reform.

Serbia’s best friend in the Arab world: The UAE