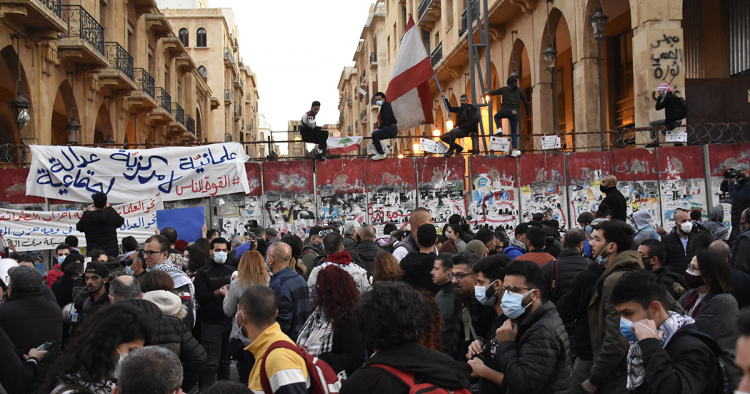 Lebanon’s political leaders are getting deeper into trouble, and they know it. This does not make them any less dangerous.

Recurring skirmishes over cabinet formation — namely those referencing constitutional powers, cabinet size, sectarian representation, and ministerial allocation — continue to dominate the public discourse and waste precious time. They remain, however, peripheral to the central issue that establishment parties currently face: an all-out struggle for political survival at a time when tough and unapologetic decisions need to be made.

To cement their grip over Lebanese public opinion, establishment parties have traditionally relied on two pillars: identity- and interest-based politics. On the latter front, the systemic financial meltdown and widescale realization that Lebanon is essentially out of money have pushed political leaders further against the wall. Their exploitation of state resources and assets to silence, bribe, or win over partisans through employment and transfers is no longer possible. The collapse in the currency exchange rate and the ongoing lirafication of deposits have hurt and angered their own popular bases, a large chunk of which is employed by the public sector and hence paid in Lebanese pounds.

To make things worse, the imminent lifting of subsidies — which to this date promises to be chaotic and unmitigated — will further exacerbate inflationary pressures and social unrest as early as late May. Even if maintained, subsidies will only temporarily delay the inevitable, encroaching along the way on any remaining and much-needed foreign currency reserves at the central bank. Selfish political calculus may in fact favor this scenario, thereby postponing public fury or at least deflecting it toward the current caretaker government while allowing Hezbollah-orchestrated smuggling of subsidized goods to Syria to continue.

A political war of attrition

When the music stops — and it is already starting to fade out — most of Lebanon’s political elites will be weakened and tainted by the collapse. Strength, in the Lebanese context, is always relative, and some parties will emerge less scathed than others. Ironically, the two biggest losers will likely be the two sides at the heart of government formation inertia: President Michel Aoun, his sanctioned son-in-law Gebran Bassil, and the Free Patriotic Movement (FPM) on the one hand, and Prime Minister-designate Saad Hariri and the Future Movement (FM) on the other hand.

President Aoun’s party, once lauded as the reformist outsider in Lebanese politics, has failed to deliver on its promises. Bound by toxic alliances with notoriously corrupt politicians, penalized by bad luck, and willingly engaged in spoils sharing and unprincipled compromises, it found itself holding the baton when the converging crises came knocking. Internal feuds and ship jumping did not help. Mr. Hariri’s party, long associated with both subordination to Saudi Arabia and the predatory neoliberalism that led to Lebanon’s financial meltdown, has seldom displayed a sense of agency. Despite its traditionally moderate stances, it has engaged in sectarian rhetoric and drawn sectarian red lines whenever its political interests were at stake. The same in fact applies to the FPM and nearly all Lebanese parties, which fall back on their reliance on identity politics in times of need or danger.

Today, both leaderships continue to blame the other for derailing government formation efforts. Along the way, they have engaged in feuds ranging from awkward televised addresses and Twitter wars to full-fledged judiciary standoffs. Time will tell, but this months-long, stubborn FPM-FM head-to-head while the country burns will likely prove costly to both parties in terms of popularity and public opinion.

In the meantime, and although fully complicit in the pileup of events and policies that has led to Lebanon’s systemic collapse, other main actors such as the Amal Movement, the Progressive Socialist Party, and the Lebanese Forces have been keeping their heads down. They realize that although the storm might not pass this time, they are less likely to be caught at its heart the longer the FPM-FM feud drags on. Mid-collapse, Lebanese politics have morphed from hawkish struggles over maximizing influence to deflective attempts at minimizing personal losses and liabilities. The rats are leaving the sinking ship, hoping that once the dust settles, they can hold on to parts of its wreckage and convince their partisans that they had nothing to do with its demise.

In the middle of the draining domestic stalemate, Hezbollah has taken the back seat. Unwilling to renege on its commitment to supporting President Aoun’s party but reluctant to engage in arm-twisting with Mr. Hariri in such tense times, Lebanon’s bête noire has maintained a more neutral stance and, at least on paper, encouraged cabinet formation.

Concurrently, it has embarked on an aggressive expansion of its deep-rooted domestic social welfare systemto further support its popular base. Hezbollah understands and is financially better positioned to act upon the fact that keeping one’s own backyard in check is critical given the circumstances. Dissent and insubordination at home are not an option. In Hezbollah strongholds, holders of a party-issued card have exclusive access to low-cost food products sourced from Syria, Iraq, and Iran. This mechanism reinforces the party’s independent and parallel health care, education, and banking systems in its areas of influence. Albeit at a smaller scale, other political parties have also started to brace for impact, doubling down on what Melani Cammett dubs compassionate communalism in her reference book of the same name.

Such undertakings send three essential signals. First, Lebanon’s warlords-turned-politicians are anticipating a long socio-economic winter ahead. Although the path to recovery and reform has now been frustratingly clear for more than a year, the struggle for survival and interest preservation by a select few politicians and their banking friends has overshadowed it. Second, establishment parties are attempting to impose a loyalty versus misery tradeoff on both their supporters and desperate Lebanese citizens. Drained by months of uncertainty and poverty, people’s defenses are gradually caving. Anger is transforming into despair and acceptance. Finally and most dangerously, the state is completely losing its raison d’être in the absence of any institutions, legitimacy, or prospects, opening the door for more sectarian entrenchment and strengthening the drive for self-rule. As Lebanese history makes clear, such episodes never end well.

Survival should come at a cost

One of the greatest dilemmas facing both the protest movement and the international community in Lebanon today lies in finding ways to alter the cost-benefit assessment of deadlocked politicians vying for relevance and survival.

French President Emmanuel Macron’s initiative in the aftermath of the Beirut port explosion last August has clearly backfired, extending a damaging months-long lifeline to Lebanon’s politicians simply in exchange for their word. Bitter and disillusioned by their “collective betrayal,” France’s drive toward the Lebanese debacle has since been slowly fading away. Under Secretary of State for Political Affairs David Hale’s recent visit has not created the sense of urgency that Lebanese citizens had hoped for either, highlighting once again that dovish policy toward Lebanon’s leadership is not working.

For American and European foreign policymakers, a plethora of options and sanctions exist targeting the billions of dollars of stolen and smuggled assets. Putting these sanctions to work may not hurt Hezbollah — that would require a far broader solution, one that has long since transcended Lebanon’s boundaries — but it would at least influence its less ideological, more materialistic allies and counterparts domestically. Lebanon’s banking sector is doomed, and most, if not all, funds and assets of politically exposed persons are now sitting in foreign bank accounts and countries. This should give foreign policymakers the leverage they need if they are serious about trying to help restore stability and arm-twist the political establishment into action.

Even then, a complication that has so far been underappreciated in foreign policy circles lies in plain sight. Even if a truly independent cabinet is formed — and it would have been by now if intentions were genuine — parliament would still call the shots on legislation and continue blocking it as needed. That is why the majority of Lebanese alternative parties have long been advocating for and working toward a transitional government with extraordinary legislative powers. Such a government would have both the independence and the agency to fairly manage the crisis and implement reforms. The conversation on how to achieve this domestically has ranged from negotiating a peaceful transition of power to attempting to turn the tables in the upcoming elections. Wherever that conversation may land, international involvement and pressure — real pressure — will continue to be instrumental in fending off the political establishment’s attempts to recreate and sustain itself at the expense of the Lebanese people.