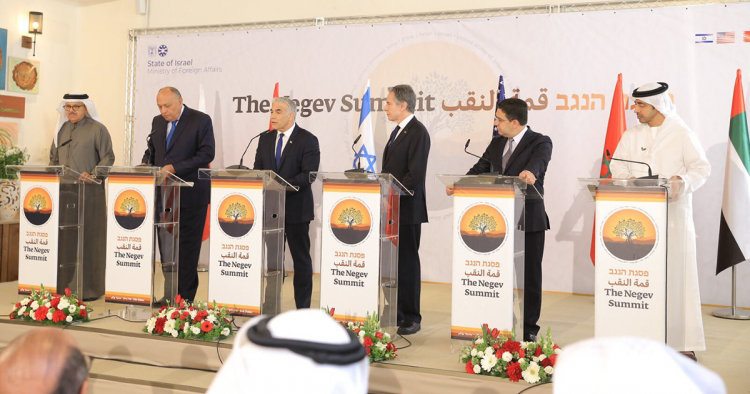 In recent remarks, the Israel Defense Forces' (IDF) Chief of Staff Aviv Kochavi announced preparations for a potential upcoming military operation, foreshadowing a possible move against Iran. Kochavi’s announcement came shortly after Israel and the foreign ministers of four Arab nations — Morocco, Egypt, the UAE, and Bahrain — along with U.S. Secretary of State Antony Blinken, met at the Negev Summit in the Israeli desert to lay the foundation for a strategic military alliance to deter "Iran and its associated militias," as Israeli Foreign Minister Yair Lapid put it.

The conflict between Iran and other regional states, including both Israel and Arab nations, spans over four decades. The battle for dominance in the Middle East began in 1979 with the Islamic Revolution in Iran. The former supreme leader of Iran, Ayatollah Ruhollah Khomeini, declared Iran to be the legitimate nation of Islam, and began a campaign to export the revolution, as he believed it should be used as a model for other nations in the region. He thought that, through mass mobilization, Islamic values would triumph over corruption, repression, and Western influence. The Islamic Republic believed that it could destabilize the region and rebuild it in its image. "Our revolution will not win unless it is exported," said Abolhassan Banisadr, the Islamic Republic’s first president. "We are going to create a new order in which deprived people will not always be deprived," he stated, referring to Shi’a Muslims. The new regime used this cause as a veneer for its efforts to further its ideological, geopolitical, and economic ambitions.

Iran has successfully kept this growing regional conflict outside its borders by starting proxies in weaker states situated between it and its rivals. Iran has been accused of meddling in Lebanon, Syria, Iraq, and Yemen's domestic affairs and helping pro-Iranian actors gain or remain in power. The result has been to undermine the regional order, and the Middle East is now home to several failing states, civil wars, and major humanitarian crises. In addition, the Islamic Republic's belligerent expansionism has pushed Arab nations and Israel closer to each other, slowly at first but much more rapidly in recent years.

Iran presents a substantial military threat: Tehran’s missile and drone capabilities exceed those of nearly all of its regional adversaries and it has embraced unmanned aerial vehicles (UAVs), significantly enhancing its air superiority. Former CENTCOM Commander Gen. Kenneth F. McKenzie Jr. warned that, thanks to Iran's drone program, the U.S. is "operating without complete air superiority” for the first time since the Korean War. The Islamic Revolutionary Guard Corps (IRGC) shares these capabilities with Iranian-backed militias — including Hezbollah, Islamic Jihad, Hamas, the Popular Mobilization Forces, and the Houthis — to be used in proxy wars or in attacks within the borders of Israel, Saudi Arabia, and the UAE.

In recent years, and especially since the signing of the Abraham Accords in late 2020, Israel has proven to be a viable ally for Arab nations facing the threat of Iran. In mid-February 2022, Israeli forces carried out a devastating attack on an airbase in western Iran, destroying hundreds of Iranian drones. The Times of Israel reported that Israel is cooperating with Middle East allies to build a “joint defense system” to counter Iranian missiles and drones. Like the Middle East Strategic Alliance (MESA) proposed by the Trump administration, the alliance will be modeled after the North Atlantic Treaty Organization (NATO). The strategic alliance will focus on shared air defenses and pave the way for sharing intelligence and military operational plans to prevent attacks.

Information that comes out of Tehran is strictly controlled; nevertheless, there are other sources from which we can learn about Iran's response to this new alliance. In 2018, Ayatollah Ali Khamenei accused Saudi leaders of treason against the world of Islam for cooperating with the U.S. and Israel. Even though Iran has never declared war on Saudi Arabia, there have been hundreds of Houthi attacks on the kingdom, striking oil facilities and civilian areas. Saudi Arabia's Ministry of Energy has condemned the Islamic Republic for enabling and arming the Houthis. While Iran tries to mask its actions against other Muslim nations, it does not shy away from making its intentions with Israel clear: Khamenei has claimed that Israel will not exist in 25 years.

In addition, any association with Israel will get a country in trouble with the IRGC. Hossein Salami, the IRGC’s commander-in-chief, sees the new Arab-Israeli alliance as a direct threat to the IRGC's security, since it aims to create a new regional order. It would also, for the first time, give Israel a foothold in the Persian Gulf. Salami asked the GCC nations to reconsider their alliance and warned them that cooperation with Israel would lead to harsh consequences. He reiterated the IRGC forces’ combat readiness in various strategic positions in the Persian Gulf.

IRGC-linked media outlets, such as Tasnim and Fars, have pushed a similar narrative. Some have added that the Israeli-Arab NATO-style regional alliance is a continuation of former President Donald Trump's Iran policy. Hossein Dalirian, a former editor of Fars turned social media influencer, has repeatedly supported Iran-backed Houthi attacks in Saudi Arabia and Yemen and even mocked the IDF’s inability to prevent the killing of five Israeli civilians in a recent terror attack. As for Iranian academics’ perspectives, Islamic Azad University professor Mehdi Motaharnia expressed that the formation of the Arab-Israeli coalition against Iran is a response to the recent attacks carried out by Iran's proxies in Saudi Arabia and the UAE. In addition, he says that the prospect of the Biden administration withdrawing the IRGC from the list of foreign terrorist groups has given impetus to the creation of an Arab-Israeli NATO. Mehdi writes, "Israel is trying to redefine the security, military, political, diplomatic, economic, commercial, and even social" structure of the region to coexist with the Arab world and confront Iran.

Even though the Arab-Israeli alliance is an existential threat to the Iranian regime, it is unlikely that the regime will abandon its foundational ideologies, as doing so would delegitimize its cause.

Moreover, Khamenei and the IRGC's expansionist agenda overshadows other perspectives within Iran, including that of the Ministry of Foreign Affairs. In 2019, then-Iranian President Hassan Rouhani unveiled a plan to bring security, peace, stability, and progress in the Persian Gulf, calling it the Coalition for Hope. It was the last attempt at uniting Iran and the GCC states. Unfortunately, the coalition failed to gain traction among the GCC states, as distrust between the two sides runs deep. Since then, the Islamic Republic has done little to restore trust and has instead doubled down on its antagonistic policies.

Khamenei and Salami's tone suggests that Iran's future foreign policy will be more of the same. If Khamenei, the IRGC, and their associated militias continue to undermine their own Foreign Ministry’s efforts to improve relations with neighboring nations, Iran will remain isolated and surrounded by enemies. Ironically, Iran’s strong-man foreign policy will fuel the alliance between the regional rivals that most threatens its security. Iran’s incendiary rhetoric and violent interference have forced a marriage of convenience between Israel and Arab nations that likely otherwise would not come together.

Ghazal Vaisi is an Iranian-born international affairs analyst focusing on China. The views expressed in this piece are her own.