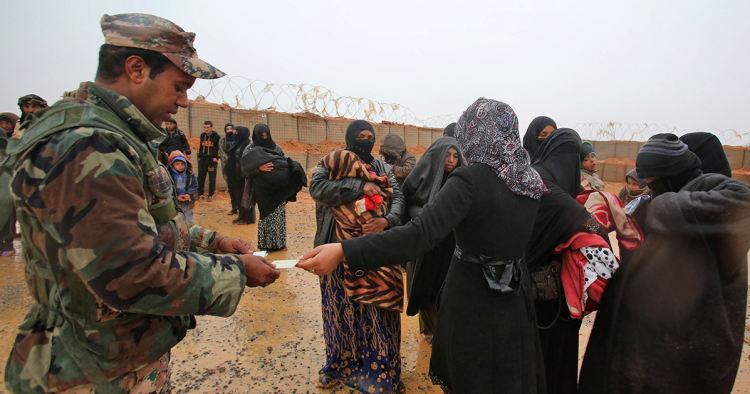 Last month, members of Congress called on the Biden administration to address the eight-year-long humanitarian crisis at Rukban, a desolate informal displacement camp in the eastern Syria desert, just miles from the U.S.-led coalition base at the al-Tanf garrison (ATG). Since 2015, Syria, Jordan, Russia, and the United States have refrained from claiming responsibility for the camp, resulting in a protracted period of inaction with severe humanitarian consequences.

International efforts to alleviate the Rukban crisis have largely collapsed, putting pressure on Jordan to shoulder full responsibility. Jordan, however, refuses, believing that opening its borders to the camp’s residents will create problems it will ultimately have to face alone.

Initially, Jordan made substantial efforts to address the worsening Rukban crisis by providing aid through various intermediaries, and even giving aid groups short-term access to the camp in 2016. These options were limited though. The Rukban crossing is not an official border crossing under United Nations Resolution 2449, and U.N. actors are not legally able to cross the border into Syria to treat camp residents. To offset this, UNICEF and Jordan opened a clinic at the country’s northernmost border to provide emergency medical and humanitarian care. This, however, required that Jordan maintain an open border to allow for cross-border medical access, and for some time Jordan allowed Syrians at Rukban to receive emergency treatment at the Jordan-based clinic.

But, as the war in Syria progressed, Jordan’s appetite for security risks diminished — following the deaths of seven soldiers at the hands of ISIS, and multiple attempted attacks in Jordan — and the border was closed more frequently. Since the outbreak of COVID-19, the border has remained closed to all Rukban residents, except on rare occasions when emergency medical evacuations merited Jordan’s cooperation.

Jordan believes that allowing Rukban residents into the kingdom will likely result in their permanent settlement in the country, since most are unable or unwilling to return to government-controlled areas of Syria, for fear of arrest or retaliation by the Syrian state.

In 2016, the Jordanian government allowed 20,000 Rukban residents to resettle in the kingdom as refugees, but concerns over potential risks prompted it to securitize their settlement at the Azraq refugee camp and restrict their movement until they were fully vetted.

The Azraq experiment ultimately left Jordan with a series of convoluted humanitarian, political, and legal issues that remain unresolved and overlooked. Five years later, Jordan has still not fully cleared all of the former Rukban residents at Azraq. A number of Rukban residents initially fled areas previously under ISIS control, and Jordan fears some may have residual ties to the terrorist organization. Meanwhile, others lack official documents, having fled rapidly to escape violence in their home communities. As a result, many remain in the camp or returned to Syria, by choice or by deportation. The verdict is still out for those Rukban residents whose vetting may turn up information Jordanian security deems problematic.

Jordan learned that humanitarian experiments like Azraq are ripe with complexity, and the international partners advocating for them are not likely to provide long-term resources, attention, or will for any meaningful resolution. This leaves Amman, whose limited financial resources are already split between supporting hundreds of thousands of Syrian refugees and sustaining its own economy, to float the bill. Simply put, Jordan sees it as a losing game.

Jordan also maintains that ISIS elements exist within the camp, fearing infiltration that would create domestic security challenges. The U.S.-led coalition offensive against ISIS, beginning in 2016, forced many ISIS affiliates to flee to the Syrian desert, where coalition forces continue operations against remnants of the group. As one of the few communities in the desert that is likely frequented by ISIS for resupply, Rukban has become a security challenge — one that has worsened through inaction and lack of attention.

A symbol of unsettled grievances

The prospect of working together to address ATG or Rukban would require both Jordan and Syria to come to terms with their troubled past. However, neither nation has gotten over the perceived sins of the other. In Jordan’s view, Syria forced on it one of the world’s worst refugee crises, and continues to destabilize areas along its border. In Syria’s view, Jordan betrayed the Assad regime by backing the opposition and continues to support a foreign army — the U.S. — operating in the east. The U.S. military presence at ATG is a powerful reminder to Syrian President Bashar al-Assad of Jordan’s support for U.S. operations in Syria, while the world sees Rukban as a manifestation of the human impact of Assad’s atrocities.

The icy relationship between Jordan and Syria has shown signs of thawing, but these incremental steps will not resolve the camp’s plight. Amman is unlikely to normalize relations with Damascus in the full sense, but is moving toward soft normalization, as more Arab leaders consider welcoming Syria back into the Arab League. While the two are likely to tacitly coordinate on key national security concerns, such as cross-border stability, Jordan will aim to avoid any overt activity on Syrian territory, like aid operations in Rukban. Such activity, from Jordan’s perspective, could undermine the fragile Syrian, Russian, and U.S. stalemate in eastern Syria and negatively impact the de facto border deterrent that ATG provides Jordan. Amman would only do so if Washington took the lead.

In the end, there is no foreseeable platform, plan, or mechanism for resolving the contestation over the 55-kilometer deconfliction zone in Syria on the horizon, and, by extension, no solution for Rukban. Russia’s invasion of Ukraine has momentarily drawn attention away from Syria and escalated Russia-U.S. tensions. The conflagration could extend beyond the borders of Ukraine into eastern Syria — a zone of residual tension and occasional incursion. The Ukrainian refugee crisis is also likely to demand the attention of policymakers in Washington, while Rukban quietly spirals deeper into its own humanitarian nightmare.

All actors — the U.S., Russia, China, Syria, and Jordan — share a legal obligation to protect the civilians suffering at Rukban. The impetus for solving this humanitarian quagmire lies with the U.S., not Jordan. Russia and Syria have proven unwilling to budge on their demands for residents to return, or for the U.S.-led forces to leave ATG, and continue to block any effective U.N humanitarian programs. Jordan also continues to resist: This resistance is a learned behavior, reinforced by more than five years of humanitarian experiments, failed negotiations, limits on donor attention, and migrating funding that has left Jordan footing the bill and managing much of the crisis alone.

As the Ukraine crisis worsens, global aftershocks — rising oil prices, skyrocketing food costs, and increasing shortages of basic commodities — could lead to greater food scarcity in Syria, hitting Rukban especially hard. If the Biden administration does not move beyond moral rhetoric, roll up its sleeves, and do the hard work of protecting Rukban residents by providing immediate aid, Jordan will not be empowered to do the same.

Jesse Marks is a D.C.-based Middle East analyst and former Fulbright scholar to Jordan. The views expressed in this piece are his own.