Why is Qatar Investing so much in Russia? 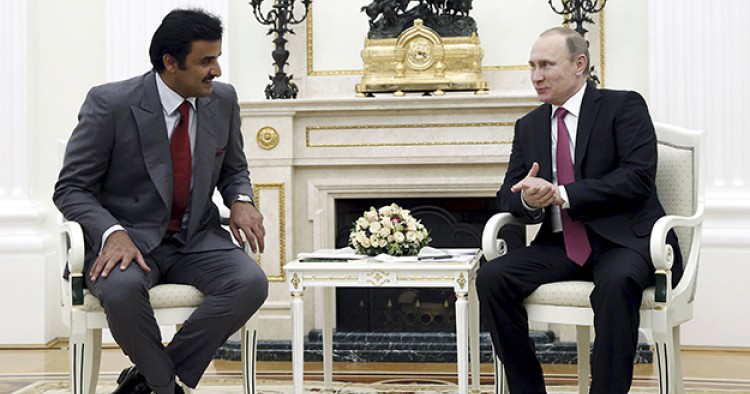 Qatar is throwing its financial muscle to woo Russia in a bid to regain lost political influence in the Syrian conflict, and the broader Middle East. Qatar’s Emir Sheikh Tamim bin Hamad al-Thani visited Russia in January to address Middle Eastern geopolitics and energy issues. Tamim stated at the time that “Russia plays a leading role in stability in the world,” while Putin said “Qatar is an important component of the situation in the Middle East and the Gulf.” Tamim’s visit was to strike a balance between events in the Levant and the future of Qatar’s energy influence.

Recognizing the growing importance of Russia in the Middle East, the Qataris are attempting to expand their leverage over Moscow by flexing their country’s enormous wealth. Qatar is a useful partner for Russia regarding alternative sources of financing and investment, and has used its large Sovereign Wealth Fund (S.W.F.) to obtain political influence by investing in Russia. Qatar’s S.W.F., the Qatar Investment Authority (Q.I.A.), is worth $335 billion in global assets, making it the 14th largest in the world. Through three main investments, Q.I.A. now has over $2.5 billion worth of assets in Russia.

In January, Q.I.A. made its biggest investment yet in Russia. In conjunction with U.K.-based Glencore, Qatar’s S.W.F. finalized its investment of $11.3 billion in Russia’s Rosneft for upstream projects, logistics, and global trading in the energy sector. The deal represents one-fifth of the Russian oil giant’s privatization portfolio.

Russian President Vladimir Putin correctly said that the deal was the largest sale and acquisition in the global oil and gas sector of 2016. Q.I.A.’s move is the largest foreign direct investment deal in the energy space globally. Russia being the recipient underscores the country’s need to grow its economy.

B.P. also has a 19 percent interest and U.K. firms with Qatari ties currently own approximately 40 percent of Rosneft.

Yet the factors driving Qatari investment in Russia are complicated due to a host of ongoing geopolitical developments. Qatar has been a vocal opponent of Russia’s key ally in the Assad regime. Now Doha must reevaluate its position on the Syrian Civil War to remain relevant by striking a balance between Saudi and Russian interests where Riyadh wants to control its neighbor’s behavior and Moscow seeks as many geopolitical dividends as possible. Following years of heightened tension between Doha and Riyadh, Tamim has eased friction by largely aligning Qatar more closely with Saudi Arabia’s regional policy, both in Syria and Yemen. Unquestionably, Doha’s continued support for the Syrian rebels will limit the extent to which Qatar could improve its political relationship with the Kremlin. At the same time, if the Qataris abandon their efforts to topple the regime in Damascus, which arguably Turkey has recently done, Saudi Arabia would remain somewhat isolated as the only state in the Middle East still promoting anti-Assad forces in Syria.

Q.I.A. seeks to secure a diplomatic position in Russia as Moscow, Tehran, and Damascus continue working in tandem to advance mutual interests on the Syrian battlefield. The Qataris recognize that Doha’s support network for Syrian rebels is failing to achieve its objective. Thus, Qatar’s ‘playing nice’ with Moscow through investments in Rosneft gives Doha a better bargaining position across the Arab world as the emirate’s political investments in Egypt and Libya have also produced diminishing returns.

In the grander geopolitical picture, Qatar is seeking to hedge its bets at a time when officials in Doha are increasingly uncertain about their relationship with the new occupants in the White House. Although there is no reason to expect the U.S.-Qatar alliance to end, the new American president’s talk of an “America First” foreign policy raises concerns in the Arab Gulf country. There is particular worry about the Trump administration potentially seeking more money from Doha for CENTCOM’s Qatar headquarters. Not lost in the equation are concerns that Qatar’s support for the Muslim Brotherhood could fuel friction in Doha-Washington relations, with Trump and his staunchly anti-Islamist circle conducting U.S. foreign policy. Notably, Qatar was the only G.C.C. state which even mildly condemned the Trump administration’s Muslim ban.

Of course, Russia also negatively views Qatar’s pro-Islamist foreign policy, rooted in Moscow’s suspicions that Doha sponsored Chechen jihadist terrorists during the 1990s. Therefore, the Qataris are unlikely to find the Kremlin more sympathetic to the support which they have given the Muslim Brotherhood than the Trump administration. Nonetheless, Qatar is not attempting to replace the United States with Russia as a defense guarantor. Instead, Doha seeks to gain greater maneuverability and leverage vis-à-vis Washington by deepening its network of partners, which includes Russia, along with China, India, and Turkey. Qatar likely wants Russia to act as an intermediary for a resumption of diplomatic ties between Doha and Damascus so Qatar can participate in reconstruction efforts, similar to past efforts in Gaza and Lebanon.

Arguably, Qatar has no good options in Syria. Continuing to support the rebels will further illustrate Doha’s failure to influence the outcome of the country’s civil war on Qatar’s terms. However, severing support for anti-Assad forces would be a humiliating acceptance of defeat in a conflict where the Qataris have invested so much since 2011. Nonetheless, by reaching out to Russia, regardless of their opposing stances in Syria, Qatar is doing something which it has always done well: maintaining close and pragmatic relations with major powers on all relevant sides of geopolitical fault lines. Qatar has similarly been able to maintain a special relationship with Iran, despite the two neighbors openly backing rival proxies in Syria and Iraq. Now, Qatar is turning to a unique political tool—its S.W.F.—to influence Syria’s endgame. Qatar is hoping its S.W.F. activity will achieve positive results on the ground in Syria, which Doha has thus far failed to do during the ongoing civil war.