Will the Nuclear Deal Help or Harm Regional Stability? 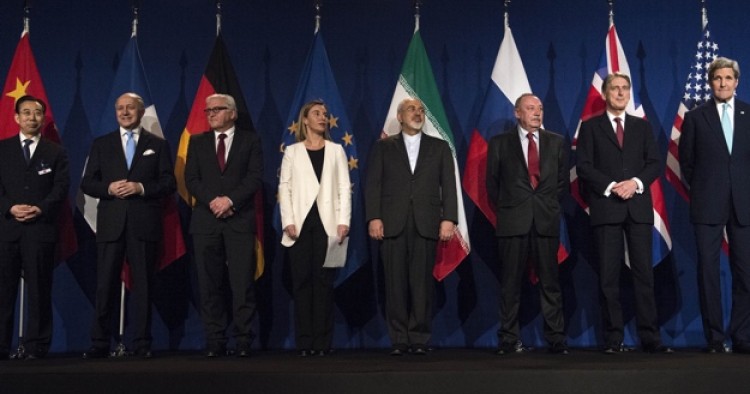 As the United States and other world powers pursued nuclear negotiations with Iran over the past 18 months, the Middle East descended into one of the worst periods of chaos and proxy conflict in its modern history, with Iran engaged aggressively in many of the region’s hotspots. Most leaders in the region fear that a nuclear deal with Iran will abet its aggressive interventionism and lead to further geopolitical and sectarian confrontation. But could the agreement—if it is completed—also create conditions for rebuilding stability? King Salman of Saudi Arabia wished as much in his terse response to the interim deal in which he “expressed his hope that reaching a final binding deal would strengthen the stability and security of the region and the world."

The dominant logic in the region sees the linear rise of an intractably belligerent Iran, with ambitions to dominate the Middle East and with control already of four Arab capitals: Baghdad, Damascus, Beirut, and Sana, and an eye on Bahrain and eastern Saudi Arabia. Many say that if Iran could do this much regional damage under international sanctions and with oil prices around $50 a barrel, how much more could it do if the sanctions are lifted and the Revolutionary Guards have billions more to play with?

They also argue that President Hassan Rouhani and Foreign Minister Mohammad Javad Zarif are the deceptively soft face of the Islamic Republic, dispatched by the supreme leader to charm the international community and lift sanctions while the real face of Iran is turned to the region in the form of Qassim Suleimani, head of the Iranian Revolutionary Guards’ Quds Force and leader of Shi‘i militias in battles throughout the Arab countries. They fear that the nuclear agreement with Iran will send a message similar to that of the chemical weapons deal with Bashar al-Assad of Syria: “As long as you don’t use weapons of mass destruction, the international community will look the other way as you wage war domestically or in the region.”

But there could be an alternative scenario. A nuclear deal could change the political dynamics in Tehran, open new options for U.S. policy, and create possibilities for more stability in the region.

News of the interim deal was greeted with jubilation in the streets of Tehran, and Zarif received a hero’s welcome by throngs that awaited him at the airport. The deal is invigorating the majority that elected Rouhani to power in 2013, and is likely to give Rouhani, Zarif, and the camp that seeks more normal relations with the West and the region added political clout.

Since the 2013 election, Rouhani and Zarif have put all their foreign policy energy into the nuclear talks with the P5+1. They chose the negotiations as their main battle, and did not contest the full takeover of regional policy by the hard-liners. It is likely that if the talks conclude successfully, Rouhani and Zarif will use their bolstered profile to try to reclaim influence over Iran’s regional policy.

While they, like most Iranians, want a prominent position for Iran in the region, the path of open-ended sectarian warfare in an Arab and Muslim world with a vast Sunni majority, into which the Revolutionary Guards has entered, is not a recipe for success. If Rouhani and his team can reclaim influence over Iran’s regional policy, this could create serious opportunities for discussions about political resolutions to the conflicts in Iraq and Syria, and the common interests of stability and prosperity that the nations and peoples of the region share.

A finished deal might also create options for U.S. policy.  So far, the Obama administration has kept talks with Iran focused single-mindedly on the nuclear issue, without addressing other troubling areas. And perhaps this “nuclear first” strategy was necessary. If a nuclear deal is signed and sealed, it could free up the administration to put other areas of serious disagreement on the table. Iranian moderation and cooperation will be needed to end conflicts in Iraq and Syria in particular, and to rebuild understanding and stability across the Sunni-Shi‘i divide in the region. This will require continued leadership and engagement from Rouhani and Zarif in Tehran, and Obama and Kerry from the U.S. side, but it will also require a central inclusion of leading Arab states, such as Saudi Arabia, Egypt, and the UAE, in the process.

One of the main worries of the Arab states has been not so much about the details of a nuclear deal with Iran, but that the United States and Iran might be discussing matters that impact the Arab region without their inclusion. The Obama administration seems already to be redressing some of the tilt that has occurred in U.S. diplomacy. The United States lent support to the new Saudi-led “Decisive Storm” coalition, which includes the GCC countries as well as the major Sunni powers of Egypt, Turkey, and Pakistan; the White House lifted the weapons freeze on Egypt; and Obama has invited King Salman and other Arab leaders to a summit at Camp David this spring to discuss regional security strategy.

The nuclear deal has shown that committed leadership and persistent diplomacy can find a path away from war and achieve results, even between longtime enemies and over the most critical security issues. Perhaps a similar approach, based this time not on the P5+1, but on the R5+1—that is, the main regional powers plus the United States—engaging with Iran’s president and government, putting their serious concerns about Iranian irredentism and interventionism on the table, might find a way out of the destructive proxy wars that have torn the region apart and devastated the lives of millions, and begin building the foundations for a more stable and cooperative region.