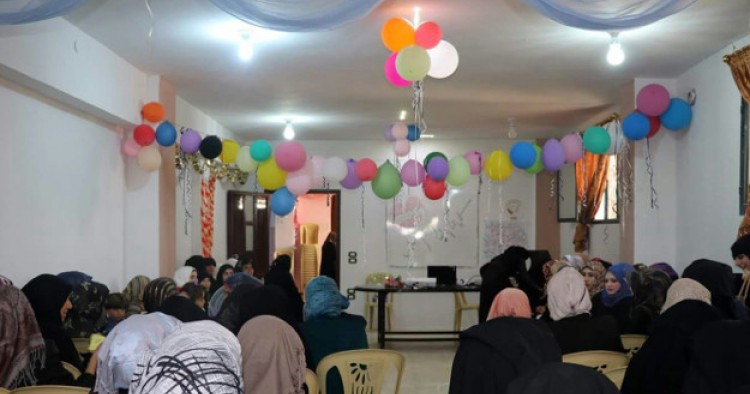 In the middle of the main market in Idlib City, during one of the busiest days of the year, Eid day, Amal, a local resident, was stopped by the Islamic police. She was chastised because of her refusal to wear the required long dark coat, the mantou. Instead of looking down or profusely apologizing, Amal shot back at the Islamic police that is affiliated with Jaish al-Fatah, “No one has anything to do with what I wear! I have been living here for the past 25 years, who are you to control me!?” The scene quickly escalated and hand fighting ensued, with shopkeepers stepping in between Amal and the police until she managed to flee.

Amal’s story, relayed to the authors, is but one example of the rising citizen anger against the fundamentalist armed forces imposing harsh Islamic regulations, especially on the female population in Idlib. Time and time again we have seen such stories reflect the absolute need to continue supporting civil society resistance against the extremist armed groups. Without such resistance, the groups would have had civil control over large portions of opposition-held territory long ago.

Idlib province, often referred to as “Little Syria,” is now home to hundreds of thousands of forcibly displaced Syrians from Aleppo, Damascus, and Homs. Idlib City was home to a population of 165,000 residents in 2011, and now houses as many as 400,000. Foreign fighters have come to the province from all over the world to fight with groups such as the al-Qaeda-linked Hay’at Tahrir al-Sham (H.T.S.). The presence of foreign fighters is felt daily in this opposition stronghold. “It took 20 years for me to see a foreigner in Idlib,” Ghalia, a resident and teacher at Idlib University, told Erhaim referring to her neighbor who came from Turkestan to fight in Syria. “Now they are all over the place!”

Despite the fact that Idlib is home to H.T.S., as well as other extremist armed groups, Idlib residents, and in particular women, have found unique ways to halt support for the normalization of these groups’ ideologies. Socially, as witnessed firsthand by one of the authors, local Idlib women have isolated other Syrian women who have chosen to marry foreign jihadists. They are not invited to women-only daily traditional gatherings, and are thus ostracized from the community.

Professionally, many women are the primary actors on the ground leading education, medical, and psychological initiatives. Idlib University is heavily policed by H.T.S., ensuring the segregation of males and females and interfering with the curriculum, such as converting the law school to a Shariah school and cancelling philosophy courses. Despite restrictions, teachers like Ghalia go on teaching, and try to motivate students to find value in continuing their education. The greatest challenge is not the constant bombing, shelling, and car bombs exploding every week; residents are accustomed to the violence. It is most difficult for educators to keep students interested in learning even though they know full well that their degrees will not be recognized by any authority. Schools and universities outside of regime territory are unregistered, so they cannot issue any official certification. But keeping these universities, accredited or not, is important now more than ever. Families are too fearful to send their daughters to government-operated universities in regime-held areas. If they are caught, and the regime is aware of their family’s support for Syria’s revolution, they will be sent to government prisons where they are likely to be raped. Even if they are not raped, the possibility that they might have been has stigmatized detained Syrian women in their societies, making it difficult for them to reintegrate and marry later on.

Women have also provided unparalleled medical and psychosocial support to other women, especially those who have been forcibly displaced from their homes and now left without their former support structures, such as extended familial support, that they previously enjoyed. Ghalia’s sister Sawsan works as a field coordinator for a gender-based violence project with an international civil society organization, managing three centers that provide psychological support to ensure that victims are able to reconnect with society in the aftermath of such trauma.

Vocational and learning centers are also setup throughout Idlib in order to provide outlets for women that keep them engaged, active, and aware of what life is like even outside of the province. There are now 19 centers that provide vocational training, peace education, and even basic education such as math and reading to thousands of women.

One such center, My Space, first began in 2015 as a free-of-charge internet cafe so that women could access news about events outside of their local communities. Within a couple of months, the center began to offer first aid and International Computer Driving License courses, in addition to English, French, and Turkish language courses. Instructors also provide guidance on resume building and job searching. Such courses have facilitated the economic empowerment of women, and their independence, allowing them to remain in Idlib instead of forcing them to seek refuge in neighboring countries. And while the Idlib Provincial Council currently has no female board members, it has invited women activists to participate in coordination meetings. This is one realm that remains in need of improvement.

It is no easy feat to be a female in Idlib, home to H.T.S., as well as an area constantly and heavily bombarded by the Syrian regime. Women have not only taken extraordinary measures to keep their communities physically safe and inside of Syria, they have also fostered intellectual growth and fought to reintegrate victims of some of the most horrendous crimes we have seen this century, including violent rape and torture.

Continuing to support the kinds of programs highlighted above is not only in the best interest of Syrian women, but also in the interest of external powers like the United States, which seek to oversee the transition into a stable Syria. Killing foreign jihadis or targeting H.T.S. soldiers will not alone produce a stable Syria. The culture of patriarchy and extremist ideology will spread and will continue to gain footing if civilians, especially women, cannot safely meet to learn basic skills, seek treatment, or are not empowered to respond to suppressive fundamentalist police and armed groups. Ending the war, and ridding Syria of both the oppressive Syrian regime as well as extremists is imperative before the long road to ensuring Syrian stability begins.