Would Turkey benefit if the US withdraws from Syria? 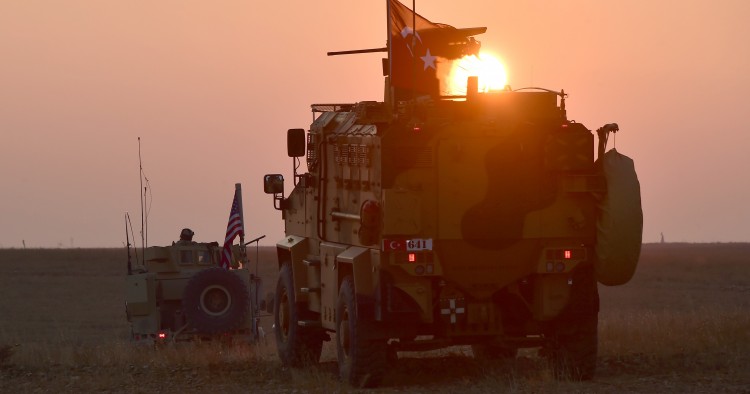 America’s Syria policy has long been a major bone of contention between Turkey and the U.S. Washington’s partnership with the Syrian Kurdish militia, the People’s Protection Units (or YPG)—considered to be an existential threat by Ankara—has poisoned the relationship between the two NATO allies since 2014. Just today, Turkish President Recep Tayyip Erdogan said Turkey will launch a new operation against U.S-backed Kurdish militias in northern Syria to the east of the Euphrates River “in the next few days.” Turkey has intervened militarily to root out YPG fighters from territory west of the Euphrates over the past two years, but it has not gone east of the river—partly to avoid confrontation with U.S. forces. Erdogan’s recent announcement indicates his patience with the U.S. has worn thin.

Turkey has tried hard to break the partnership between the U.S. and the YPG, to no avail. A potential attack against YPG targets east of the Euphrates is not likely to get the job done either. To Ankara, the best solution to its “U.S. problem” might seem like a U.S. withdrawal from Syria. Pro-government circles in Ankara have been arguing that a U.S. withdrawal would go a long way to address Turkey’s security concerns. That, the thinking goes, would leave the Kurds exactly where Turkey wants them—weak and vulnerable—and end their aspirations for autonomy. But it might also create new and potentially more complicated problems for Ankara.

In an effort to build an anti-Kurdish front in Syria, Turkey has teamed up with Iran and Russia. Iran plays an important role on the ground and shares Turkey’s fear of Kurdish autonomy. The two became the most ardent opponents of the referendum on Kurdish independence in neighbouring Iraq in 2017. Russia is equally critical for any Turkish effort to curb Kurdish influence in Syria. It controls the skies and wields significant leverage over the regime. So far, Turkey’s partnership with Iran and Russia has paid off. Moscow greenlighted Turkey’s military incursions into Syria to curb Kurdish influence there while Iranians looked the other way when Turkish forces pounded Kurdish targets in northern Syria. Ankara thinks that it has secured a great arrangement and a U.S. withdrawal would be the icing on the cake.

But Russian and Iranian willingness to go along with Turkey’s plans in Syria largely stems from the U.S. presence there. Moscow and Tehran are uneasy about the U.S. control over oil-rich north-eastern Syria and its cooperation with the YPG. Washington’s announcement in December 2017 that it is developing an expanded training program for local Kurdish and Arab border guards in Syria, therefore, rattled Russia and Iran because it indicated that the U.S. would remain on the ground. The prospect of a long-term U.S. presence in Syria forced a change in Moscow’s strategy vis-à-vis the Kurds.

Russia was the first major country to bring up the possibility of a future federal Syria. In February 2016 Russian Deputy Foreign Minister Sergei Ryabkov told a news briefing that Syria could become a federal state. Moscow also had military cooperation with the YPG in Afrin, the Kurdish enclave in north-western Syria, up until the end of 2017. Russia pressured the Kurds to break their alliance with the U.S. Only after Moscow concluded that it could not decouple the YPG from the U.S. did Russia change its strategy. In the run-up to the Turkish incursion, Russia asked the YPG to hand over Afrin to regime forces, but it refused. Moscow greenlighted the Turkish military operation in response.

Moscow hoped Turkey’s Afrin operation would weaken the YPG and its partnership with the U.S.—and drive a further wedge between Ankara and Washington. If the U.S. withdraws from Syria, Moscow would have little reason to continue its anti-Kurdish policies and would likely to revert back to its original support for a federal Syria. This would be a nightmare scenario for Turkey.

A U.S. withdrawal would also make Turkey’s military presence inside Syria more difficult. Neither Russia nor Iran nor the regime will tolerate a Turkish military presence controlling large swathes of territory once the U.S. is gone. Iran and the regime may be benefiting from Turkey's control over Syrian jihadists and pro-Turkish Free Syrian Army rebels for the moment, but the real advantage of having Turkey inside Syria is to put pressure on the YPG to submit to the regime and weaken YPG-U.S. partnership.

The U.S. involvement in Syria also helped Turkey in Idlib. Turkey has long feared a regime offensive in the opposition’s last stronghold, Idlib, which would send a new wave of refugees to the Turkish border and deal a deadly blow to the opposition, weakening Turkey’s hand in the Syrian conflict. U.S. efforts behind the scenes to prevent a regime offensive in Idlib helped Turkey secure the deal there.

Despite the daily grumbling coming out of Ankara about the U.S. presence in Syria, Turkey might be better off with the status quo. As long as the U.S. remains in Syria, Turkey has a stronger hand vis-à-vis Russia. Airstrikes by the U.S., UK, and France that followed chemical attacks in Syria were not decisive in themselves. But the strikes made Russia realize that it did not have the power to stop Western attacks and its best bet would be to create further rifts between the U.S. and its NATO ally Turkey, giving Turkey the opportunity to play off Russia and the U.S. against each other. The alternative to the status quo is a Syria in which Turkey’s archenemy is under the control of an Assad regime that has used the Kurds against Turkey for decades or a Russia that supports Kurdish autonomy.