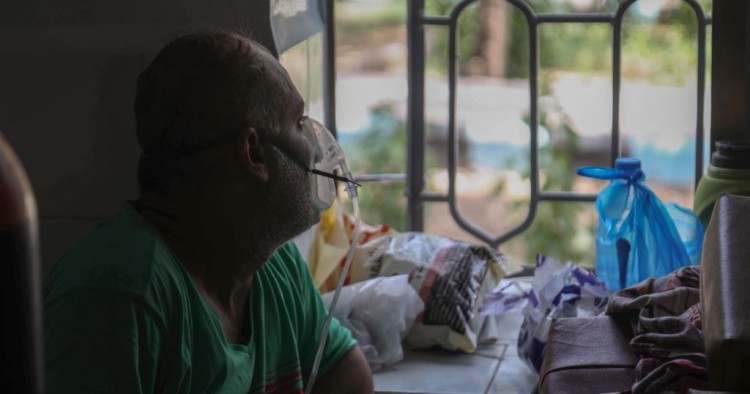 On April 2, 2020, the Houthi version of Saba News Agency in Sanaa announced the first coronavirus case in Yemen, but shortly afterwards it retracted the news and the deputy chairman of the agency’s board of directors was fired. Many Yemenis had hoped the Saudi-led coalition’s blockade of the country and its resulting isolation might have helped to prevent an outbreak. However, just a week later, the supreme national emergency committee for COVID-19 recorded the first coronavirus case, in the eastern governorate of Hadramawt. Since then, the virus has been spreading rapidly undetected, with a known fatality rate just below 25 percent — “nearly four times higher than the global average,” according to the UN Office of Coordination and Humanitarian Affairs (UNOCHA). Of the more than 1,100 reported COVID-19 cases, over 300 people had died as of June 30. However, a lack of adequate testing and a deliberate underreporting of cases suggests that these figures may be merely the tip of the iceberg.

The overall situation in the country, torn apart by conflict, is very fragile. Health infrastructure in particular is largely inadequate. Health Cluster Partners, a group of IGOs and INGOs, supports a total of 2,041 health facilities across the country. However, nearly one-fifth of Yemen’s 333 districts have no doctors. The country’s health system has deteriorated sharply since the conflict intensified in March 2015, with only 51 percent of facilities functional. The UN reported at the end of May that Yemen only had 675 ICU beds and 309 ventilators nationwide. Weeks later, the International Initiative on COVID-19 in Yemen, chaired by Yemeni philanthropist and business leader Hayel Saeed Anam, mobilized a “43-ton shipment of medical and laboratory supplies,” including an extra 426 ventilators, with oversight from the World Health Organization (WHO).

Meanwhile, health workers, like many civil servants and soldiers, have not received their salaries in months. Payment has been stymied by a number of factors, including the UAE-backed Southern Transitional Council’s (STC) seizure of some 64 billion Yemeni riyals from the Central Bank, the STC’s diversion of local revenues from state institutions, the coalition’s restrictions on Yemeni oil exports, low oil prices, and the Houthis’ withdrawal of over 35 billion Yemeni riyals from a UN-monitored special account in Hodeida.

The humanitarian crisis has also been alarming. In 2019, the UN office in Yemen reported that around 80 percent of the population (about 24 million people) needed some form of aid and 19.7 million people lacked access to adequate health care. According to Save the Children, 12.3 million children are in need of humanitarian assistance. While these figures have not gotten significantly worse yet, according to available UN reports, there is no doubt that COVID-19 will profoundly deepen the humanitarian crisis in war-ravaged Yemen, where malnutrition, a lack of basic services such as electricity and water, and certain social habits (like qat gatherings and large funerals) create the perfect recipe for a calamity. Moreover, the coronavirus is only the latest health crisis in Yemen. It has suffered from a number of other vaccine-preventable epidemics and outbreaks, such as cholera, diphtheria, dengue fever, and malaria, which have infected millions. Against this backdrop, the WHO has projected that as many as 16 million people — over 50 percent of the population — may become infected.

The coronavirus crisis, alongside a 44 percent shortfall in humanitarian funding this year and a sharp decline in foreign remittances due to the economic fallout of COVID-19 and its impact on Yemeni expats, only increases the humanitarian needs and economic woes. Iona Craig, a freelance journalist and representative of the Yemen Data Project, noted that foreign “transfers through Alkuraimi [Islamic Bank] dropped by an unprecedented 70 percent when COVID-19 measures were first introduced regionally in March.” Formal remittances amounted to $3.8 billion in 2019, a figure higher than international humanitarian aid, which doesn’t include indirect remittances through a wide range of channels. According to World Bank estimates, even before the pandemic, one in 10 Yemenis relied on cash transfers to survive.

In liberated areas of the country, there has been a variety of responses to the pandemic. In more stable governorates like Hadramawt and al-Mahra, local authorities have fared better. They imposed curfew measures, restricted inter-governorate travel, followed up with COVID-19 developments, and coordinated the health response with stakeholders within the context of broader conflict-management measures. Like the rest of Yemen, the two governorates are in need of medical equipment, including personal protective equipment, ventilators, and testing kits. In Aden, where the STC imposed self-administration in late April, the situation is dire. Several hospitals, fearing COVID-19 transmission, simply closed their doors as patients sought medication and diagnosis, with undiagnosed deaths in the first two weeks of May reaching approximately 950. These included deaths related to seasonal diseases triggered by the recent flooding and hot temperatures, as well as a more substantial number thought to be related to COVID-19.

The recent escalation between the Yemeni army and STC-aligned forces in Abyan Province and on the Socotra archipelago, both with tacit Saudi approval, may have further delayed the emergency health response. In Aden, unlike al-Mahra and Hadramawt, the situation has yet to significantly improve as hundreds of people continue to die, demonstrating the need for greater support for local hospitals as well as the presence of a functioning and capable government. The residents of Hadramawt and al-Mahra must preserve, if not enhance, stability and security to ensure an efficient COVID-19 response.

COVID-19 in Houthi-held areas: From denial to acknowledgement

In Houthi-held areas, the rebels’ concealment of COVID-19 figures has only allowed the pandemic to spread undetected. A month after the initial denial, the Houthis acknowledged the first COVID-19 case, on May 5. Then, on May 13, Reuters confirmed an al-Masdar Online report that the Houthi authorities were underreporting cases and deaths, and that Kuwait Hospital in Sanaa, for instance, had concealed over 50 coronavirus cases and 20 deaths. Paradoxically, since then, the Houthis have reported as few as four cases. Meanwhile, the bodies of suspected COVID-19 victims are quietly being buried under the cover of darkness, according to Maggie Michael of the Associated Press.

“Our late brother interacted with all family members in Sanaa. He lived his daily life and chew qat with friends. Our cousins and their families visited us. We also visited them. No one knew our brother was infected by COVID-19 until some symptoms were exhibited before he eventually died. You could imagine how many people got infected unknowingly in the process,” a young Yemeni who lost his brother in April due to the coronavirus told MEI.

In order to conceal the true figures, the Houthis have declined to coordinate and share information with international health organizations, instead surveilling the phones of those infected with COVID-19 and intimidating health workers, patients, and their families. Fear of retribution keeps many people and even some organizations from speaking out publicly about the pandemic.

In mid-June, Mohammed Ali al-Houthi, a senior Houthi figure, publicly acknowledged the suppression of COVID-19 information in an interview with the BBC, admitting that “announcing or concealing COVID-19 cases doesn’t slow down the pandemic’s spread.” The Houthis’ reckless behavior has hastened the spread of the virus and caused unnecessary suffering. Even before they covered up COVID-19 cases, the Houthis played the blame game, accusing the coalition of spreading the pandemic and the U.S. of manufacturing it, as MEI’s Fatima Abo Alasrar has noted.

What drives the Houthis’ COVID-19 approach?

There are four primary drivers of the Houthis’ approach to the pandemic. First, the Houthis fear that acknowledging its scale would have consequences on the battlefield. From a military standpoint, revealing COVID-19 figures or adopting a curfew and lockdown measures would not only lead to personnel defections from the frontlines but also to a significant decline in public mobilization and recruitment, at a time when the Houthis were preparing to take control of Radman al-Awad in Bayda, and seeking to reinforce their positions in al-Jawf, Marib, and Nihm in east Sanaa.

Second, the official acknowledgement of the crisis in Houthi-held areas took place during the holy month of Ramadan, the time when annual zakat payments are collected. In a bid to boost their financial resources, the Houthis did not want to risk impeding this; their zakat authority reportedly collected an estimated 43 billion Yemeni riyals in May 2020.

A third reason is to resist increasing international pressure, given broader discontent with the insurgency’s diversion and weaponization of incoming relief aid and its use of the Safer oil tanker, an abandoned vessel off the coast of Yemen that could sink or explode, as a bargaining chip to gain further leverage.

Fourth, there has been a clear desire on the Houthis’ part to avoid additional local and external political pressure for their mismanagement of affairs, and their repeated efforts to improve their international reputation by whitewashing their policies have so far failed.

Four urgent steps should be taken, in light of Yemen’s poor health infrastructure, alarming humanitarian crisis, rapidly spreading pandemic, and complex conflict landscape, marked by the Houthi weaponization of the coronavirus, the STC’s negligent behavior, and the fragility of the government. First, international organizations and UN Security Council states must put pressure on the Houthis to disclose the actual COVID-19 figures. Without understanding the scale of the pandemic, donors cannot mobilize the necessary resources and carry out their work, and the number of infections and deaths could skyrocket. If the situation is left unaddressed, the death toll from the virus could reach or even surpass the total number killed in the conflict so far.

Second, given data-access challenges and conflict dynamics between the various actors, UN agencies like the WHO and UNOCHA must urgently establish a coordination mechanism between the Yemeni government, the Houthi rebels, the STC, the private sector, international organizations, local partners, and the Saudi-led coalition, through which they can share real-time information to deal with COVID-19 as a matter of public health and help to mobilize resources and coordinate a rapid response.

Third, foreign donors are urged to immediately include health workers in their aid plans and ensure they are paid, as they are the first line of defense against the pandemic at hospitals, medical centers, on the frontlines, and in camps. Moreover, major powers can support the fragile Yemeni government in collecting revenues by exerting credible pressure on armed actors that are looting them and weakening its ability to pay salaries and reinstate a functioning and responsible government in Aden.

Finally, the UN secretary-general’s call for a global cease-fire to bolster the COVID-19 response demonstrates the significance of the pandemic in matters of security and peace. The UN Security Council can use its leverage by threatening to impose targeted sanctions against actors and leaders that are undermining the COVID-19 response.