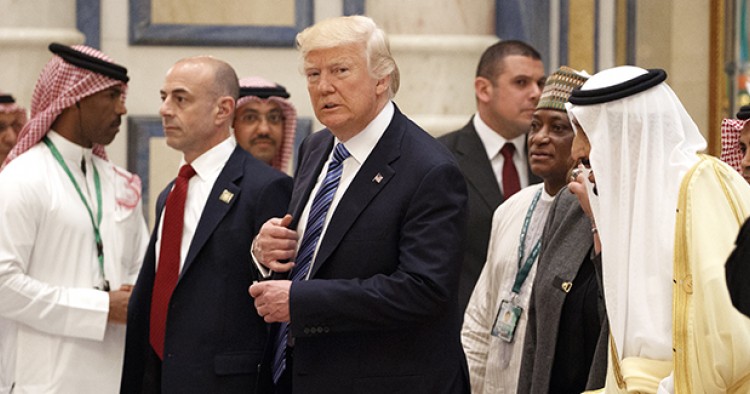 Is the traditional view that U.S. leadership in the Middle East advances our strategic interests well judged? As president, Barack Obama upended many assumptions about that view. He turned heads in dismissing Saudi Arabia as a “so-called ally” and reached out to Iran, hoping to make it less dangerous.

His perspective prompted Adel al-Jubeir, the kingdom’s then ambassador to Washington, to remark that its feared enemy Iran is the new great power of the Middle East.[1] “ISIS is not an existential threat to the United States,” Obama told journalist Jeffrey Goldberg.[2] Joe Brennan, his chief counterterrorism adviser disclosed that Obama felt “the Middle East was consuming us.”[3] Obama disdained the region’s leaders. He viewed them as autocrats who had failed to provide prosperity or opportunity for their people and had created a mess he could not fix.  He believed that terrorism swamped more urgent priorities, such as addressing China’s rising power and fighting climate change.

Some worry that American voters no longer believe that, except for Israel, engagement in the region serves our interests. Obama was idealistic but in error. U.S. interests require correcting any misconception that the Middle East no longer matters.

Let’s start with American opinions. The respected Pew Research Center reported that 79 percent of Americans say ISIS poses a major threat to the well-being of the United States. Nearly half perceive the large number of refugees leaving Iraq and Syria as one, and another 35 percent see that as at least a minor threat.[4] In late May, the respected Middle East expert Shibley Telhami reported that a University of Maryland poll taken for Politico revealed real concerns among Americans as to ISIS.[5] Obama may dislike Saudi Arabia, but in the Politico poll, Saudi Arabia ranked first among Arab nations in the region as the closest U.S. ally. [6]

Perhaps not accidently, President Donald Trump selected a visit to the region for his first foreign trip. Good, confluent reasons support that decision. Four underscore why American leadership there is a national security priority.

First, much of the terrorist violence that affects the world emanates from the region. The military defeat of ISIS in Syria and Iraq—which will happen—define key operational and tactical victories. But the strategic political dynamics that fueled the rise of ISIS will persist.

These include the appeal to many Muslims of reviving their dream of a new caliphate, lingering hostility to the artificial borders drawn by the Sykes-Picot agreement, and anger among Sunnis at mistreatment in Iraq and Syria. Even were ISIS destroyed, failure to address these challenges meaningfully will give rise to a successor. The fighting there also affects security from the Levant to North Africa. And don’t forget al-Qaeda. In Yemen, al-Qaeda in the Arabian Peninsula remains particularly dangerous to the U.S. It provided a base for the al-Qaeda Imam Anwar al-Awlaki, trained the ‘underwear bomber’ Farouk Abdulmutallab, and remotely radicalized the Fort Hood shooter Nidal Hasson. And in Syria, al-Qaeda under the name of Jabhat Fateh al-Sham, has established a deep and wide presence in opposition-held areas.

U.S. allies in the region look to the United States to help foster stability. These states should lead in quelling extremist ideology and violence, and creating prosperity, but U.S. leadership to support such efforts is vital. Our effectiveness depends on maintaining credibility. Allies must know they can depend on us. That requires active U.S. presence and engagement.

Second, the Suez Canal remains a vital artery of global trade. Over 2.5 million barrels—8 percent of global oil trade—pass through it. Supporting regional efforts to secure the canal helps maintain stable energy prices. J.W. Baker points out that our alliance with Saudi Arabia—to whom Russia is making aggressive overtures—ensures the stability of the dollar as the world reserve currency.[7] That’s because the Saudis ensure that petroleum is bought and sold only in U.S. dollars, which helps us economically.

Third, the Arab divide in the region is more complicated and nuanced than Sunni-Shiite tensions. U.S. leadership is vital in forging plausible coalitions that serve our interests. Trump bolstered Saudi Arabia’s status during his visit, but Sunnis are diverse. Indeed, as this is written, Saudi Arabia, the United Arab Emirates, Egypt, Bahrain, Yemen, Libya’s eastern-based government and the Maldives have severed diplomatic ties with Qatar, whom they accuse supports Islamist extremist factions and stokes regional conflicts. From a different perspective, many Sunnis in the region reject the kingdom’s extremely conservative religious and political posture, and worry that it sows instability. Indeed, the Saudi-U.A.E.-led intervention in Yemen—backed by the United States—is a political debacle, and has prompted charges of war crimes, with no solution in sight.

Finally, backing off from Middle East engagement will create a political vacuum that Iran and Russia would happily fill, and further complicate tensions with our NATO partner Turkey. The Chinese would love to occupy center stage as the party whose actions maintain stable energy prices. Finding realistic ways to engage with these parties—bearing in mind Ronald Reagan’s cold-eyed, hard-nosed view that when dealing with actual or potential adversaries, “trust but verify”—is mandatory. Abdicating the field of play to them is not.

One understands Obama’s frustrations. Managing the challenges the region poses to U.S. interests is tough. But doing so effectively requires asserting strong leadership, respecting our allies as partners, and forging a regional strategy that forms part of a wise global one.

[6] For the record, that characterization excludes Israel.