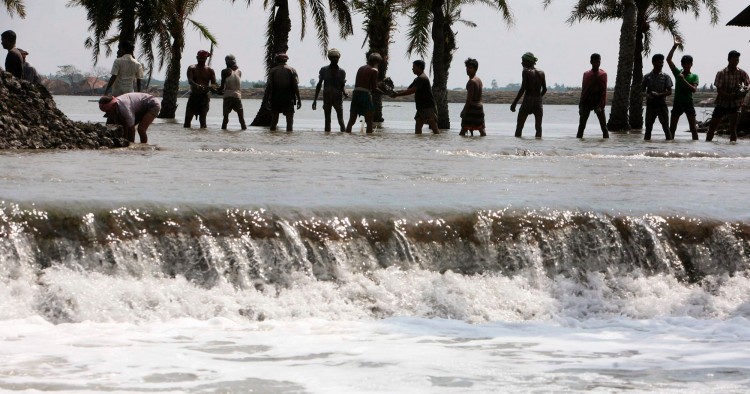 Bangladesh is considered one of the most vulnerable countries to climate variability and fluctuation and to extreme climatic events. Bangladeshi coastal communities are continuously adopting survival strategies in order to cope with changing climatic conditions. To offset the effects of extreme climatic events, vulnerable communities are often forced to migrate within the country. This essay discusses the impact of climate change on livelihoods and documents the current and future adaptation strategies of Bangladeshi coastal communities. The findings of the research conducted for this essay indicate that those who migrated to another area were able to secure new places to reside, but in locations that made them susceptible to other forms of disaster.[1]

Coastal hazards (i.e., tropical cyclones and coastal erosion) are regarded as the greatest threats to human life and security in many countries. Bangladesh, which has a predominantly agricultural economy, a rapidly increasing population, and a slow economic growth rate, is currently ranked as one of the most prone to natural disasters.[2] Bangladesh has a coastline of over 710 km, joining its vast 47,201 km² of coastal plains with the Bay of Bengal.[3] The country has 64 administrative districts, 19 of which are considered coastal.[4] The coastal zone accounts for 32 percent of the total area of the country (Fig. 1), and 28 percent of the population lives in this zone. The landward limit of the coastal zone from the shore is between 30 and 195 km.

Since the earliest history of human settlement on the Bangladeshi coast, many people have chosen to situate their homes along unstable riverbanks or insecure offshore islands located in the northern end of the Bay of Bengal, where living conditions were affordable and livelihood opportunities plentiful. However, many of these offshore communities (e.g., Sandwip, Kutubdia, and Hatiya) have been subjected to frequent tropical cyclones (Fig. 2). In addition, the local communities on these remote islands have been severely affected by coastal erosion. To offset the impact of disasters, coastal people are continuously applying adaptation strategies.

Climate change adaptation refers to the adjustment of natural or human systems in response to actual or expected climatic stimuli or their effects in order to moderate harms or exploit beneficial opportunities.[5] Building the capacity to adapt to climate change implies that people must protect themselves against inevitable new and exogenous threats to their health and wellbeing. The U.N. Intergovernmental Panel on Climate Change notes that “adaptation to climate change takes place through adjustments to reduce vulnerability or enhance resilience in responses to observed or expected changes in climate and associated extreme weather events.”[6]

Figure 1. Location of Bangladeshi Coast and Selected Study Areas for This Essay 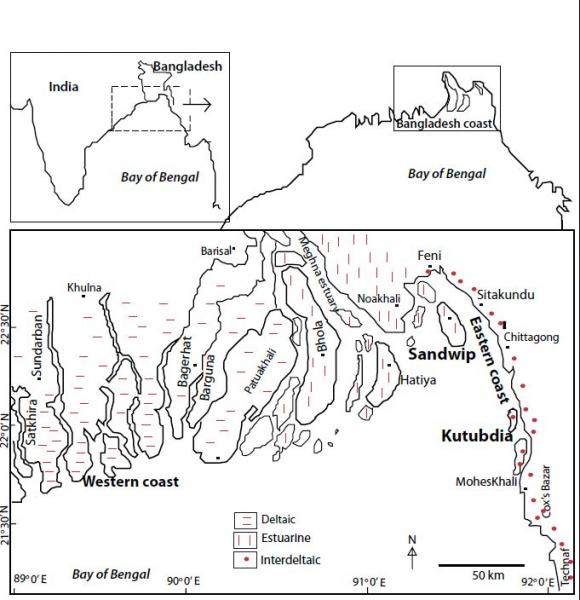 As a signatory to the United Nations Framework Convention on Climate Change (U.N.F.C.C.C.), Bangladesh developed a National Adaptation Program of Actions (NAPA) in 2005. The NAPA identified potential impacts of climate change as well as vulnerable sectors and geographic areas and proposed the most important and immediate adaptation actions.[7] Three years later, the Ministry of Environment and Forests published the Bangladesh Climate Change Strategy and Action Plan (B.C.C.S.A.P.), a “living document” that aims at developing long-term practical strategies to mitigate climate change risks.[8]

Non-governmental organizations (N.G.O.s), too, have been making significant contributions to promoting local residents’ health and sustainable livelihoods and mitigating disasters in Bangladesh, notably by significantly reducing waterborne diseases and promoting alternative livelihoods among the Bangladeshi coastal communities. For example, Caritas Bangladesh and its local partner Sushilon assisted local communities in southwestern Bangladesh in emptying and cleaning ponds, which are their residents’ sole sources of drinking water. The implementation of these programs has markedly decreased the incidence of diarrhea, dysentery, and skin diseases, which had been widespread among the local residents. 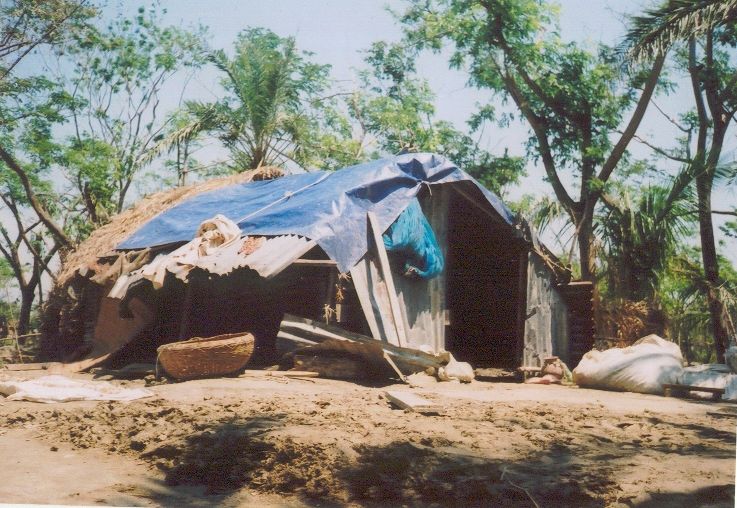 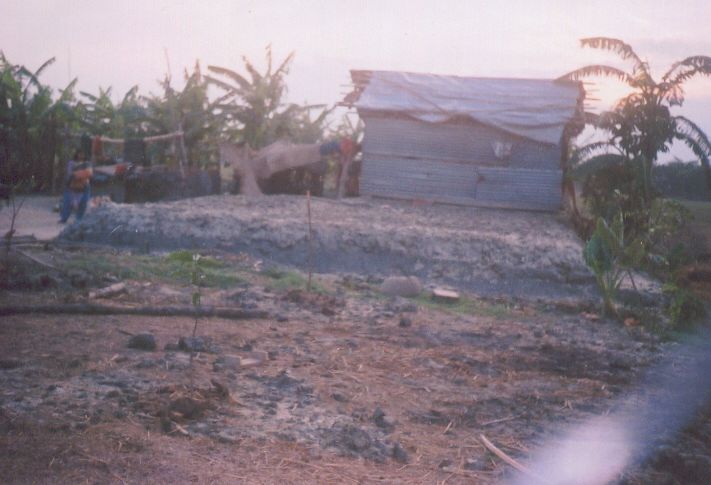 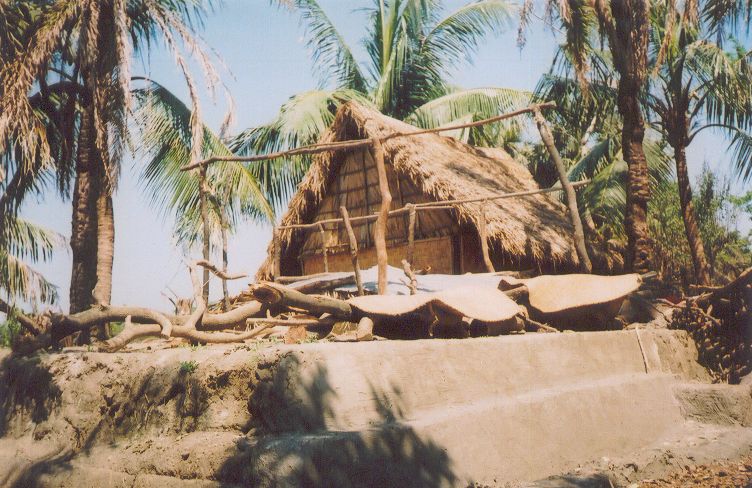 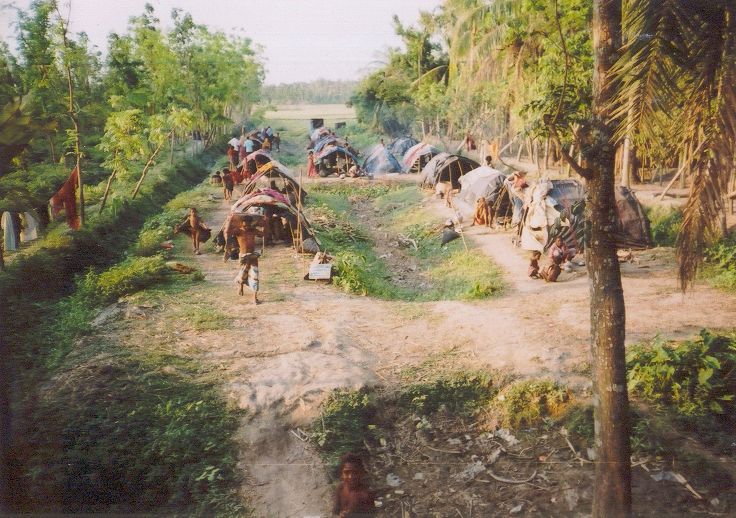 Apart from the initiatives taken by the national authorities and by non-governmental organizations, coastal community members have taken it upon themselves to find ways to adapt to the heightened risk of climate-related natural disasters. The research conducted for this essay suggests that hazard-affected people have employed a variety of short-term and long-term actions to cope with disastrous conditions (Table 1). However, migration is one of the most common adaptation strategies following a disaster, primarily as a result of lost livelihood and the fear of the recurrence of another such calamity. Focus group discussions and field visits revealed that many coastal communities members—particularly those living on daily earnings who own neither land nor other property—had changed their residence from the offshore islands, which they had judged to be insecure, to areas on the mainland, which they had presumed to be more safe. (Fig. 3).[9] 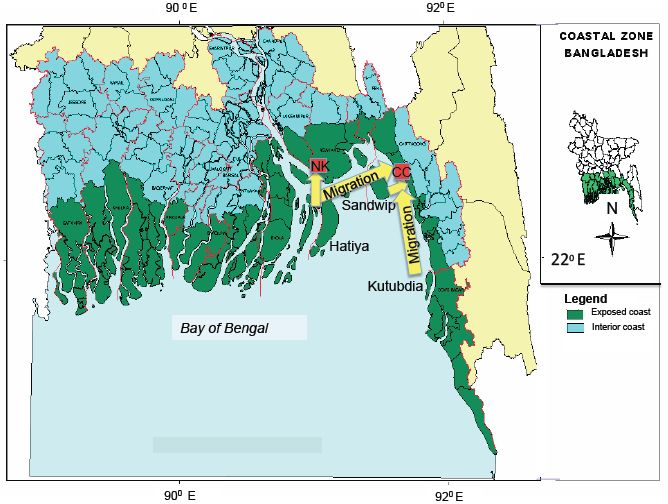 Note: The yellow solid arrows show the flow direction of disaster-induced migration from the offshore islands to the mainland of Bangladesh. CC=Chittagong City, NK=Noakhali.

Indeed, firsthand evidence from coastal Bangladesh—an area frequently affected by tropical cyclones, riverbanks, and coastal erosion—indicates that near-distance and far-distance out-migration is a continuous adaptation action. Some people migrating from the offshore islands form squatter settlements along the unstable hillside in and adjacent to Chittagong City (Fig. 4). Torrential rainfall in the deforested hills in Chittagong City in June 2007 caused landslides that affected 2,680 families and claimed 137 lives. An analysis of the settlement history of the victims of the landslides found that they had migrated from the offshore island areas to the unstable slopes in the Chittagong City hillside. Three-quarters of those who had migrated to these unstable areas had previously lost their houses as a result of the April 1991 cyclone or due to coastal erosion. Of those who perished in the 2007 landslides, the death toll for women and children far exceeded that of adult males. (Fig. 5).

Figure 4. Houses at the Base of the Hillside, Kusumbagh area, Chittagong City 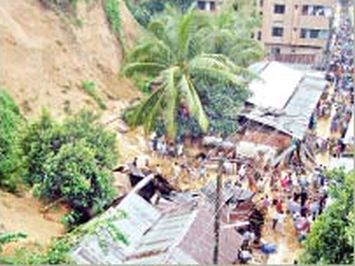 The research suggests that the Bangladeshi coastal community is taking continuous adaptation actions to survive the slow onset and sudden changes of climate conditions. Changing the location of their houses from hazard-prone coastal areas to the mainland is one form of adaptation action the coastal community has undertaken. However, the ongoing research on disaster-induced migration indicates that migrants are often not able to obtain secure land but rather settle in an area that is, itself, prone to another form of disaster. Currently, Bangladesh Climate Change Strategy and Action Plan (BCCSAP) is also undertaking programs to mitigate and adaptively respond to climate change. It is less clear how effective the planned adaptation actions (i.e., those taken by the Government of Bangladesh, non-governmental organizations and other community-based organizations) will be on those autonomously adopted by the coastal communities. The current research is an initial step to explore all types of adaptation actions, disaster-induced migration, and vulnerability in the context of coastal Bangladesh. We are in the process of exploring the whole context of migration, disaster vulnerability and resilience in coastal Bangladesh. The fruits of this research will be shared with academics and research, the Government of Bangladesh, NGOs, and others working on disaster risk reduction, climate change adaptation and sustainable development sectors in Bangladesh and elsewhere in the world.

[11] J. Pouliotte, B. Smit, and L. Westerhoff, “Adaptation and Development: Livelihoods and Climate Change in Subarnabad, Bangladesh,” Climate and Development 1 (2009): 31-46.