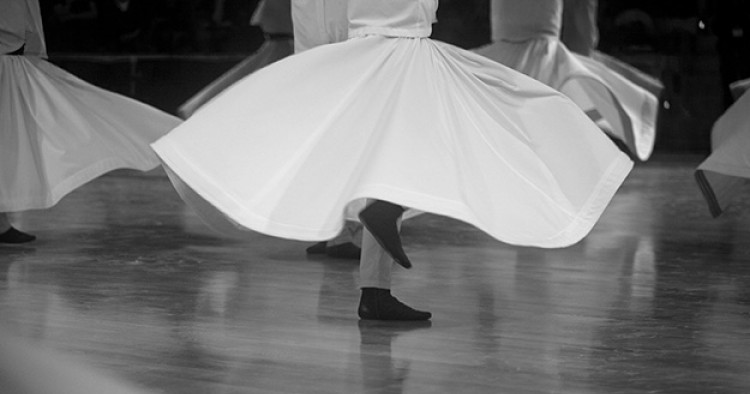 Virtuoso French-Swiss qanun player Julien “Jalal Eddine” Weiss, who tirelessly promoted classical Arab and Syrian music to international audiences from his home in Aleppo, Syria, died this month in Paris. Forced to flee Syria’s brutal civil war like millions of other Syrians, Weiss’s death is a sad reminder of the ongoing threat to Aleppo’s rich cultural traditions, as well as an occasion to remember the city’s heritage, which played such an important role in inspiring his unique Middle Eastern compositions.

After encountering the great Iraqi oud player Munir Bachir in the 1970s, a young Weiss moved to Cairo to study Arab music, eventually mastering the qanun, a horizontally played string instrument similar to the zither. In 1983 he founded the music ensemble Al Kindi, comprised of top Syrian and Arab musicians, and began the pursuit of his lifelong obsession to make classical Arab and Ottoman music more accessible to Western audiences. For 30 years, Al Kindi toured the world, playing festivals and music venues, among them the world’s most prestigious, like New York City’s Carnegie Hall and Washington’s Kennedy Center. Al Kindi went on to record more than a dozen CDs of sacred and profane music, many of the compositions based on the music and poetry of the ninth, tenth, and eleventh centuries, considered the time of Islam’s highest cultural flowering.

A convert to Islam, Weiss embraced Sufism, and Al Kindi’s performances fused the chant and rhythm central to this mystical branch of Islam with Middle Eastern sounds produced by the qanun, flute, oud, and tambourine. Al Kindi’s performances often featured religious incantations performed by munshids (religious reciters), like the popular Sheikh Hamza Shakkur of the Great Mosque of Damascus, as well as whirling dervishes, creating a transcendent evening of music, song, and dance.

Aleppo, home to dozens of Sufi orders, as well as some of Syria’s finest musicians, was a natural base for the artist, who, in 1995, bought a fourteenth-century Mamluk palace in the Bab Qinnasrin neighborhood of Aleppo’s Old City. An architectural gem with a three-story domed ceiling, Weiss filled the palace with oriental rugs and antiques from the nearby souk, and used it to showcase the city’s musical talents. In the evenings, under the stars, in his jasmine-filled courtyard, local musicians, many of them butchers and bakers by day, would pick up an oud and join Weiss’s frequent musical salons.

A wealthy trading post at the end of the Silk Road, Aleppo, a medieval city, is one of the world’s oldest continuously inhabited urban areas. Before the conflict began in 2011, much of the city had remained well-preserved since the fifteenth century. At one point during the Ottoman Empire it was second in significance only to Constantinople, becoming a cultural crossroads where caravans from Anatolia, Iran, Mesopotamia, and Syria converged. It was such an important economic hub that by the sixteenth century, several European consulates, including the Consulate of Venice, had opened trade offices in Aleppo. Out of such a cosmopolitan mix grew a rich musical tradition, Weiss told me when I interviewed him for NPR in his Aleppo home in 2002, and the city produced both musicians and music lovers.

By the early twentieth century, the singers of Aleppo were considered the boldest improvisers in the Arab world, and Aleppo’s audiences among the most discerning critics. Even the great Egyptian singer Oum Kalthoum would try out new songs in front of finicky Aleppians who were renowned for their tradition of weekly musical salons.

Aleppo’s rich musical history was also linked to its religious traditions. Aleppo was long one of the region’s most important centers of Sufism, a branch of Islam that developed in the eighth and ninth centuries that emphasizes universal love and a mystical union with the divine. In the twelfth century, Aleppo found itself under Ayyubid rule, the dynasty that gave rise to the legendary Sultan Saladin, who re-conquered Jerusalem from the Crusaders. Concerned about the threat posed by the Crusades and Shi‘i Ismailis, the Ayyubids launched an effort to promote Sunni Islam by introducing Sufi convents and lodges, known as zawiyas, many of which took root in Aleppo.

Weiss took me to a Sufi dhikr ceremony one day, a ritual practice to remember God. For more than an hour, a dozen men repeated God’s name as they chanted and rocked back and forth in rhythm, while I sat in a corner recording their song, awed to be in such company.

When Weiss fled Aleppo in 2011, leaving everything behind, he was deeply concerned, not only about the fate of his many friends and colleagues there, but also about the city’s Sufi orders.

Hard-line Islamists like ISIS have long loathed Sufis, claiming that they are unbelievers because of their mystical traditions. As the militarization of Syria’s conflict led to the rise and empowerment of such extremists, Weiss anticipated the worst in a 2012 interview he gave from Istanbul to British journalist William Dalrymple:

They hate the Sufis and want to close down the brotherhoods just as they did in Timbuktu. Their black flags are now seen all over Aleppo. Most of our musicians are homeless, and our principal whirling dervish now has shrapnel riddling his legs.

Weiss’s worst fears about attacks against Sufis are being realized as groups like ISIS pursue a campaign to destroy Sufi shrines and tombs throughout Syria. Syrian news sources recently reported the destruction of the tomb and library of a popular Sufi sheikh, Mohammad al-Nabhan, not far from Weiss’s home.

This destruction is in addition to the ongoing devastation in Aleppo wrought by Bashar al-Assad’s continued use of barrel bombs as well as fighting between the government and rebels. Just a few blocks from Weiss’s home, the historic twelfth-century Umayyad Mosque, a UNESCO world heritage site, has lost its minaret from Syrian army tank fire. And not far from the mosque, the Souk al-Madina, the historic bazaar of Aleppo, has been largely burnt to the ground due to fighting between the two sides.

But miraculously, Weiss’s palace still stands, its wall hangings and mother of pearl chests exactly as Weiss left them, according to a Syrian activist who visited Weiss’s home in August 2014 when he was helping to deliver Swiss-funded food aid inside the city. The activist, who asked not to be named, reports that the neighborhoods around Weiss’s house have been reduced to rubble and are devoid of inhabitants. But because of the palace’s proximity to the front line between the government and rebels, it has escaped the shelling campaign. Today, the activist notes, it is protected from looting by a group of Syrian rebels, who told the activist that the palace belonged to a well-known and respected French musician who had played with Aleppo’s musicians.

In Paris this past winter, where he was dying from cancer at age 61, Weiss told a friend that he wasn’t sorry to go, given the loss of everything that was so dear to him. But while many of the living traditions that so inspired him are threatened with extinction, Weiss left behind something permanent and indelible. The dozens and dozens of compositions that he and Al Kindi recorded are invaluable evidence of the wealth of culture that has existed in the Arab world and Aleppo for centuries.

With names like “The Crusades Seen through the Eyes of the Orient,” “The Whirling Dervishes of Damascus,” and “Aleppian Trance,” Al Kindi’s CD titles trade on the West’s fascination with “the Orient.” But to listen to the recordings is—for Arabs and Westerners alike—to be transported back to a time when music in the Middle East was revered as something close to God-like.

Not even the combined forces of the Assad regime and ISIS can wipe away such beauty. One can only hope that it will serve as an inspiration to the generations that will inevitably return to rebuild Aleppo.

>> After the Spring, Arab Art Blossoms