An “All-Hazards” Approach to Resilience: Benefits and Building Blocks 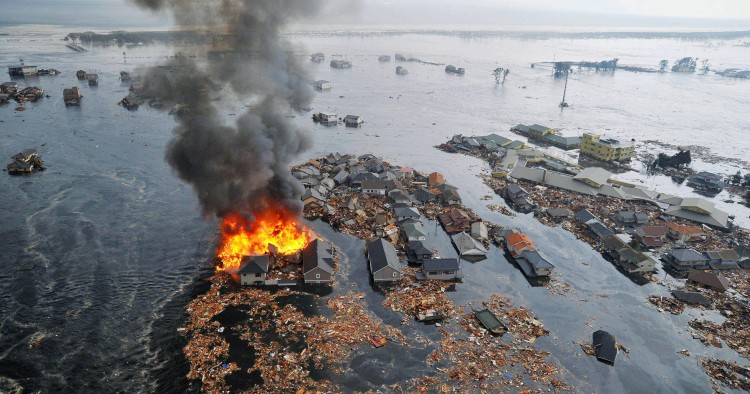 Over the last 25 years, the world has seen a rise in the frequency of natural disasters in rich and poor countries alike. Today, more people than ever are at risk from natural disasters, with those in developing countries particularly at risk. This essay series is intended to explore measures that have been taken, and could be taken, in order to improve responses to the threat or occurrence of natural disasters in the MENA and Indo-Pacific regions. Read more ...

One dark early morning, I received a text message from a friend. It said “I can’t believe what happened in your country. Hope your family is safe.” I jumped onto my laptop and opened the online news. I don’t remember what time it was and how many hours I had been watching the unbelievable images—floodwaters swallowing entire towns, silently and relentlessly.

The Great East Japan Earthquake occurred at about 2:46 PM JST on March 11, 2011. The M9-level earthquake, in turn, unleashed a huge tsunami, resulting in 15,829 deaths, 3,725 missing, and 241 cities/towns in ten prefectures directly affected.[1] The toll inflicted by this disaster far surpassed the effects of the large earthquake that struck Kobe in 1995, which affected 25 cities/towns in two prefectures, claimed 6,434 lives, only 3 missing and no damage from a tsunami.[2]

Developing a more effective tsunami response plan is a difficult challenge—evacuation is everything once a tsunami hits. Of course there are ways to prepare for such an eventuality, including building safer shelters and breakwaters. However, once a tsunami strikes, there is no option except one’s own efforts to evacuate. The government and various agencies issue an evacuation order and try to reach out to people through crisis communication, setting up shelters, mobilizing search and rescue teams, commencing emergency medical treatment, and taking additional action as needed. In fact, these institutions have developed a variety of measures in order to respond to a disaster. However, as the Great East Japan Earthquake demonstrated, these countermeasures are inadequate. More specifically, the 2011 earthquake in Japan revealed that a natural disaster might trigger, or be followed by secondary disasters, such as widespread fires and even a major nuclear power plant accident. What, then, could be done in order to guard against the possibility of a multi-disaster incident?

Unfortunately, Japan has not (yet) applied the All-Hazards concept. As a result, when a disaster occurs, Japanese officials must determine what kind of disaster it is, look into the laws and procedures in accordance with each disaster’s character, and determine which article(s) might be applicable in order to enact the response. Senior government officials, including the Prime Minister—none of whom are disaster professionals—are compelled to deal with very detailed, highly specialized laws in the midst of post-disaster chaos and decide instantly their course of action. Though these officials are joined in the Emergency Operations room by trained professionals from uniformed services (e.g., police/law enforcement, Self Defense Forces, Japan Coast Guard, and Fire Department), these professionals are bound by their respective institutional regulations and standard operating procedures, and by nature part of a “silo” structure. The key to successful emergency management is to coordinate and manage these elements, integrating them into a single team effort. But who has the authority and responsibility to do so? Under the prevailing circumstances in Japan, it falls to non-disaster professionals, and specifically to senior government officials, to assume this role. In the absence of a pre-existing integrated strategy for responding to disasters, whatever their specific characteristics, these officials are forced to improvise. This is precisely what occurred within the Japanese Cabinet office at the moment when white smoke began emerging from the Fukushima-Daiichi nuclear power plant in 2011.[6]

In contrast, the United States has designated “professional” executives in place to deal with disasters, such as the Director of the Federal Emergency Management Agency (FEMA) for any domestic emergency and the Secretary of the Department of Homeland Security DHS) regarding homeland security-related issues. It might be neither prudent nor feasible to establish an exact replica of the American model in Japan. Nevertheless, given the potential benefits of embracing an All-Hazards approach, it is useful to consider the requirements for constructing a viable Japanese version of FEMA.

The first such prerequisite is to draw upon the discipline of Emergency Management (EM) as an applied management science in order to implement the All-Hazards approach. Emergency Management (EM) as an applied management science teaches how to collaborate with colleagues in other professional areas, work as a team, allocate limited resources, and communicate effectively. EM teaches non-technical (e.g., skills including managing skills ahead of technical skills. Government executives, elected officials, and other stakeholders need not be or instantly become specialists when an emergency happens, but they do need to work with such specialists/professionals. Of critical importance is integrating all efforts necessary to mitigating the damage inflicted by a disaster. EM imbues all stakeholders with a single, overarching set of “norms,” thereby helping to reduce the proclivity for conflict that is commonly experienced within a silo structure; fostering collaboration between uniformed and civilian professionals; facilitating agreement among various interest groups/stakeholders; and accelerating decision making. Even in the absence of a FEMA or some other organization like it, an All-Hazards approach would work with well-managed Emergency Operation rooms staffed by personnel who have had comprehensive Emergency Management education.

Second, we need to professionalize the industry with higher education to share the discipline of Emergency Management and brush up their knowledge, skills and ability to mitigate, prepare for, respond to, and recover from multi disasters. Professionalization in the United States started under the Clinton Administration in 1992. Like the higher education program of FEMA/EMI (Emergency Management Institute), the opportunity to develop higher education at the national level would encourage schools and colleges to enhance their own programs. Establishing a higher education institute at the national level such as EMI would be even more advantageous than creating a Japanese version of FEMA.

Finally, it is essential that every country forge and maintain close links with an international network of professionals. It is difficult to survive a large-scale disaster without help from other countries. Following the Great East Japan Earthquake, Japan received support from 163 countries and regions and over ¥175 million in total donations. Receiving money and supplies from abroad was valuable and much appreciated, but so too was the knowledge and advice supplied by seasoned professionals. When, for example, Japan was unable to decide on the scope of the evacuation zone because Japanese specialists were in disagreement and hesitated to set the maximum permissible exposure, American specialists stepped in to provide expert advice that helped established the evacuation zone.[7] Outside experts, therefore, can be extremely valuable assets whether in helping to gather accurate information or in mobilizing resources in order to respond quickly to disasters. It is also beneficial for each country to have its own professional associations, and for them to be part of an international network.

The Japanese government has not yet officially adopted any of these three ideas. Nevertheless, a number of other, promising developments have recently occurred. For example, in 2014 the International Institute of Global Resilience (IIGR), in conjunction with the International Association of Emergency Managers (IAEM) and the Japan Medical Association (JMA), published for the first time in Japanese an Informal Incident Command System (ICS) handbook. ICS is the main concept of the All-Hazards American Emergency Management and a national standard of response operation. Similarly, the JMA, in collaboration with American NGOs, tried to introduce the All-Hazards approach by publishing a formal “textbook.” As a consequence, Japanese medical doctors have learned how to collaborate with each other in order to create an integrated operation. Grassroots efforts such as this demonstrate that progress towards the adoption of an All-Hazards approach is possible even in circumstances where the bureaucratic decision to embrace it has not yet been made.

Indeed, for Japan and for other nations seeking to derive the benefits of an All-Hazards approach, the pathway to its adoption lies through continuous efforts spearheaded by mission-driven individuals and committed NGOs, as part of an international network, to establish and refine best practices and de facto standards tailored to each country’s distinctive needs and characteristics.

[6] Mr. Tetsuro Fukuyama, Vice Secretary General of the Democratic Party of Japan and a member of the House of Councilors in the Diet, described in detail what transpired inside the Cabinet during the Great East Japan Earthquake. When the Tokyo Electronic Power Company (TEPCO) asked the government to dispatch vehicles to generate power for Fukushima Daiichi, Prime Minister Naoto Kan had to take note of the vehicles’ specifications, such as weight or size. He and Mr. Fukuyama had to arrange the dispatch of the vehicles themselves, because the senior bureaucrats did not, as expected, perform this task. However, their failure to act was likely inevitable, since they are not trained to make decisions or take action in response to emergencies. Nor is anyone other than the Prime Minister or a handful of other senior government officials legally authorized to do so. See 「原発危機 官邸からの証言」福山哲郎、ちくま書房 (2012): 36 [Tetsuro Fukuyama, “Nuclear Crisis: Witness from the Prime Minister and his Cabinet,” Chikuma-shobo (2012): 36].