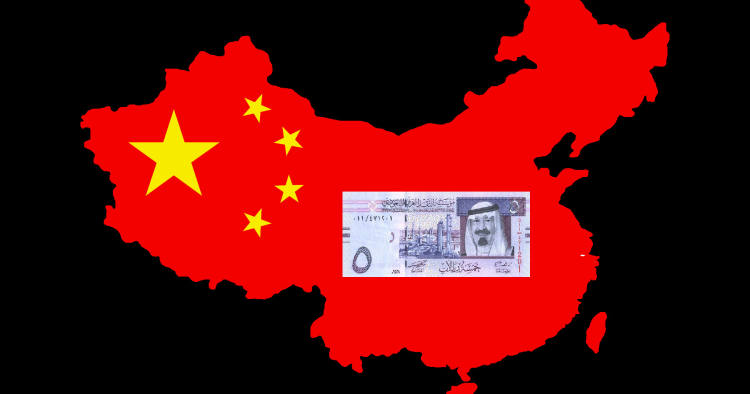 The Arab countries and China have a long history of economic relations and cultural exchange.

➢     The GCC’s growing trade ties with China have been accompanied by encouraging development in investment relations. 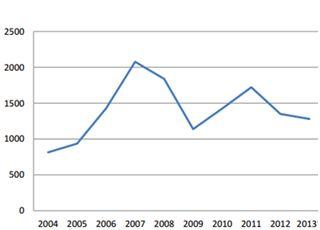 ➢     The downturn in FDI outflows from the UAE reflected the impact of the financial crisis compounded by the Dubai debt crisis in 2009. Interestingly, outflows from Jordan, Saudi Arabia, Iraq, Tunisia, and Lebanon increased substantially (Table 1). 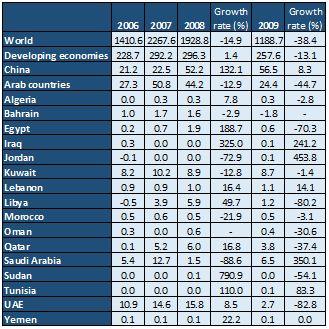 ➢     Among the GCC countries, FDI outflows from Kuwait were the largest in absolute terms in the two years of the crisis (2008-2009).

➢     FDI outflows from Qatar and Bahrain were also significant, especially in relation to the size of their economies.

➢     The GCC countries entered the financial crisis with large current account surpluses, thanks to the high price of oil up to mid-2008.

The Arab countries have historically been net importers of FDI. However, this is changing due to large current account surpluses (Figure 2). 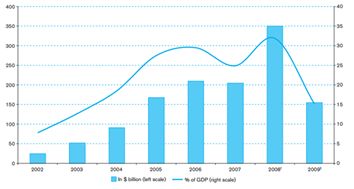 ➢     The United States followed by the EU were traditionally the main destinations of GCC capital, but Asia is increasingly becoming a more important destination.

-        This has been driven in part by an extended period of low interest rates and low yields on U.S. and European assets (particularly sovereign debt) since the financial crisis, which has made emerging market assets more attractive for investors globally.

-        GCC capital in search of higher yield assets has turned to domestic equities and other markets, particularly in Asia.

-        FDI outflow from the Arab countries to China increased at a fairly steady rate between 2003 and 2008 to reach a record level of USD 404M. However, this only represented 0.44% of China’s total FDI inflows, underlining the immense size of the Chinese market.

-        But these flows have been growing since 1999, particularly those from GCC countries, a sign of the MENA oil-exporting countries’ growing interest in Asia and a growing dependency reflected by the rise in bilateral trade, non-oil included.

➢     In 2009, FDI outflows from the Arab countries to China declined by about 40% to USD 241M. Despite running large current account surpluses, GCC investors became increasingly cautious toward the end of the 2008-2009 financial crisis in view of a weakening global demand for oil and declining oil prices.

Investment flows between the GCC countries and China are still fairly small, but are increasing fast. Flows are growing from both the oil-rich countries as well the rest of the MENA region. 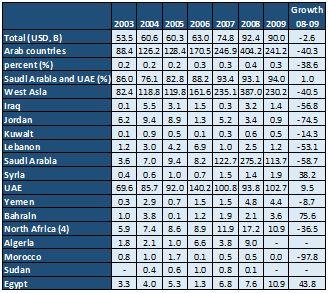 ➢     Between 2003 and 2009, the UAE had the largest FDI flows to China in absolute terms. However, in percentage terms, Saudi Arabia (over 3,000%) had a significantly larger increase in its FDI outflow to China than the UAE (about 50%).

-        Saudi Arabia and the UAE had very high rates of domestic savings (40-50%), of which high proportions were channeled outside rather than into domestic investment.[1]

-        FDI outflows to China from Algeria and Iraq also grew significantly, albeit from a relatively low base.

-        Among the non-oil MENA countries, Lebanon, Egypt, Syria, and Yemen also steadily increased their investments in China over the years even through the financial crisis, in some cases exceeding in absolute terms investments of some oil producers.

➢     The FDI flows from the Arab countries to China recovered quickly, but rather unevenly, from the downturn during the 2008-2009 crisis.  Arab states remained key players in international investment in 2010 (Table 3). 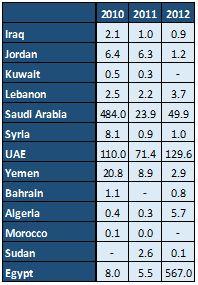 ➢     In the post-crisis period, among the capital surplus countries the UAE has shown a fairly consistent trend in FDI outflows to China.

➢     Capital-deficient countries like Jordan, Sudan, Lebanon, Yemen, and Morocco that had been affected to a greater degree by the financial crisis began curtailing their investments.

-        Many of these countries were also affected by the turmoil of the Arab Spring.

➢     The dramatic political upheaval that spread quickly throughout North Africa and the Middle East in 2011 affected the Arab countries, some more significantly than others.

-        No information is yet available for 2013 and 2014, but admittedly, investments by conflict countries like Syria and Yemen are hard to explain.

-        The Arab Spring had little or no impact on FDI outflows from the GCC countries and most other Arab states even though the regional turmoil affected inflows into these countries.

-        It appears that FDI [inflows or outflows] has been more resilient in countries like Saudi Arabia, the UAE, and Lebanon.

Table 4. Projects Initiated in China by Arab States in 2011 by Sector 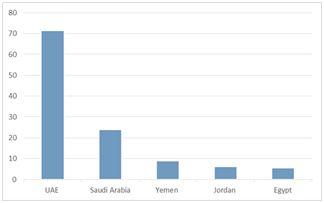 Reliance on FDI varies considerably by country. UNCTAD has used two measures to identify the dependence of Arab countries on China: the Degree of Integration Index and the FDI Intensity Index (Table 5).

➢     An index measure greater than 1 indicates that a country is highly dependent on China as a destination for its investment.

Table 5. Degree of FDI Integration (China as a Destination) 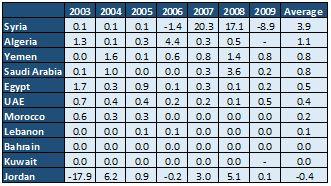 ➢     As shown in Table 5, on average, between 2003 and 2009, the country mostly dependent on China as its investment destination is Syria. Other countries with high dependence are Algeria, Egypt, Saudi Arabia, and Yemen.

➢     In contrast, Bahrain, Kuwait, and Lebanon, much smaller countries with lower population rates, have revealed little or no dependence on China.

China is a very attractive destination for foreign capital, receiving USD 121B of foreign investment in 2012 (8.9% of global FDI inflows).[2]

➢     China appeals to investors for its large market, its low cost of production (relatively cheap labor), and its fairly developed infrastructure.

➢     China is particularly attractive to the GCC countries, as the ongoing upgrades of its chemical industry to world standards match the profile of GCC investors.

➢     However, the lack of suitable local partners, an inadequate institutional and legal framework, and language barriers have so far been a drag on investment.

Beyond the Energy Sector

Energy is at the heart of Sino-Arab economic relations, and the GCC countries are using a diversified range of instruments to invest in China.

➢     For these countries, investment projects in China promise access not only to large and rapidly growing energy markets, but also to other booming sectors such as retail and telecommunications.

-        The state-owned Aramco, the world’s largest oil producer, took a 25% stake in the Chinese Fujian refinery.

-        It also formed a joint venture with PetroChina for the construction of a 200,000 bpd refinery in the southwestern Chinese province of Yunnan.

➢     In 2012, Saudi Arabia and China signed an agreement to enhance cooperation on nuclear energy. Saudi Arabia is planning to build 16 nuclear power reactors over the next 20 years, with the first one planned to be online in 2022.

➢     Jumeirah Group, the Dubai-based international luxury hotel chain and part of Dubai Holding, has announced massive expansion plans to build luxury hotels in the provinces of Guangzhou, Hainan, and Zhejiang, as well as Macau.

In January 2014, President Xi Jinping called for the early signing of a free trade agreement between China and the GCC as a concrete step toward “constructing” the Silk Road Economic Belt and the Maritime Silk Road.

➢     The agreement will boost economic, trade, and communication cooperation between the two regions and will strengthen their strategic partnership as their trade and investment relations grow.

➢     We expect FDI flows, in both directions, to continue to grow steadily from here.