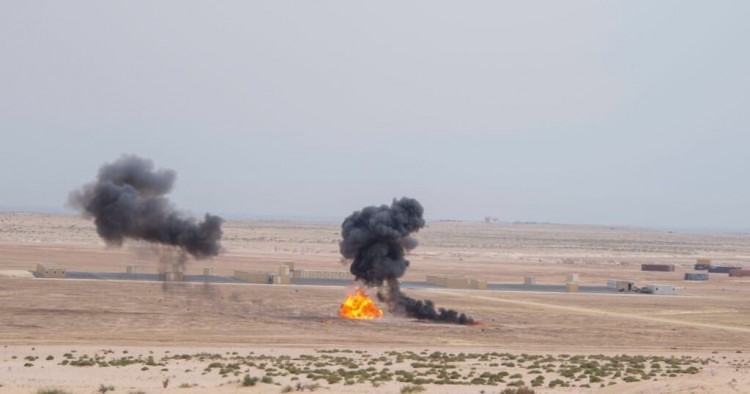 As naval, air, and ground units from Bahrain, Egypt, Jordan, Kuwait, Saudi Arabia, and the United Arab Emirates (UAE) conduct war games in western Egypt this month, joined by observers from Morocco and Lebanon, many speculate that this could represent the birth of the so-called “Arab NATO.” The military exercises, held from Nov. 3-16 and codenamed “Arab Shield 1,” are the first time the six Arab states have conducted joint war games at the same time. Despite this display of coordination, however, there are major political obstacles to establishing an Arab NATO.

The Trump administration has been pushing Washington’s closest Arab allies to create a regional security pact that it calls the Middle East Strategic Alliance (MESA). As the White House sees it, MESA would serve U.S. interests by strengthening pan-Arab resolve to counter Iran’s actions in the region. It would also establish a local force to fight violent extremist groups and ease the military and strategic burden on the U.S. The fact that the six Arab states brought together their armed forces just over a month after Secretary of State Mike Pompeo called on their governments to establish an alliance highlights the U.S.’s interest in making MESA a reality. The U.S. effort has been met with significant resistance, however, as Arab states chronically struggle with major divisions stemming from their divergent strategic priorities in the region as well as fundamentally different attitudes toward both Iran and political Islam.

Half-hearted enthusiasm for MESA began in the country hosting the military exercises, Egypt. Egypt’s military did not suggest a connection between “Arab Shield 1” and the pan-Arab alliance envisioned by the U.S. in its official statement about the war games. As Cairo remains keen to avoid a sectarian foreign policy, the statement mostly focused on jointly tackling Sunni extremism and did not single out Iran as a threat.

Under President Abdel-Fattah el-Sissi, Egypt is to an extent forging its own path on foreign policy with respect to Iran as Cairo does not perceive the Iranian threat the same way as most of its Gulf allies do. But given its heavy dependence on financial support and investment from Saudi Arabia and the UAE, Egypt’s post-2013 government has been required to back Riyadh and Abu Dhabi diplomatically against Tehran. This was illustrated by Cairo’s decision to join the anti-Iranian Islamic Military Counter Terrorism Coalition (IMCTC), previously known as the Islamic Military Alliance to Fight Terrorism (IMAFT), unveiled in December 2015 by Saudi Arabia’s then-Deputy Crown Prince Mohammed bin Salman. Nonetheless, Egypt has refused to commit troops to the Saudi-led coalition fighting the Iran-allied Houthi rebels in Yemen, unquestionably the most strategic theater for both Riyadh and Abu Dhabi. Cairo has also allied itself with the Iran-backed Syrian government, led by President Bashar al-Assad.

While it too is a member of IMCTC/IMAFT, Jordan has a different perception of regional threats and different priorities. Although King Abdullah II was the first leader to raise concerns about the so-called “Shi’a crescent” and Amman has been unsettled by the influx of Iranian-sponsored non-Arab Shi’a militias into Syria, the Jordanian government sees the expansion of Israeli settlements in the occupied West Bank and East Jerusalem as a greater threat to its internal stability. Jordan’s large Palestinian population and the Syrian refugee crisis inform all aspects of its regional politics. As Hassan Barari wrote in a piece for The Jordan Times, Amman’s “threat perception has little to do with Iran and everything to do with Israel’s rejection to allow the Palestinians to exercise their right to self-determination. ... Israel’s expansionist foreign policy is a mortal danger for Jordan, not Iran.”

Even Kuwait is likely to view a potential anti-Iranian alliance of Arab states warily. It did not join Saudi Arabia, Bahrain, and the UAE in welcoming President Trump’s decision to pull out of the Joint Comprehensive Plan of Action (JCPOA) in May 2018, and in early 2017 the emirate actively sought to defuse tensions between Tehran and the Gulf Cooperation Council states. Lessons from the Gulf wars (1980-1988, 1990-91, and 2003) inform Kuwaiti thinking about regional security, and it has since sought to avoid becoming entangled in disputes with its neighbors. The emirate may thus find it difficult to join a security framework that is so focused on countering Iran. Furthermore, the ruling Al Sabahs must also contend with domestic political sensitivities, especially towards the country’s Shi’a minority, and joining a strongly anti-Iranian bloc could fuel local unrest.

Despite some significant differences, all six states participating in the Arab Shield 1 maneuvers perceive the Islamic Republic as an anti-status-quo actor, and an outright hostile one when it comes to propping up the Syrian regime, arming Shi’a/Zaydi militias in Iraq, Lebanon, and Yemen, and allegedly supporting violent elements of Bahrain’s domestic opposition. Yet when considering Qatar’s and Oman’s views of Saudi Arabia and Iran, it is difficult to imagine that either Doha or Muscat will become an active participant in any such Arab NATO.

As long as the Saudi/UAE-led blockade of Doha continues, the Al Thanis will perceive Saudi Arabia as a more immediate threat than Iran. Odds are good that Oman will avoid entering a pact aimed at countering Tehran as Muscat places a high priority on maintaining diplomatic relations with all Gulf states (including Iran) and remaining neutral in proxy conflicts fueled by the Iranian-Saudi rivalry, such as Syria. In stark contrast to Riyadh, Muscat played a key role in helping Iran and global powers reach the JCPOA, an accord that the sultanate optimistically saw as beneficial for the economic and security interests of the wider region.

In the aftermath of Jamal Khashoggi’s murder, which has severely strained U.S.-Saudi ties, Riyadh is determined to demonstrate to the Trump administration that the kingdom and its regional allies are unified against Iran and can meet the American president’s demands. In his historic speech in Riyadh in May 2017, President Trump laid out these demands, asking Arab/Muslim states to combat the threat posed by terrorist groups like ISIS and al-Qa’ida, as well as an ascendant Iran. As President Trump seeks to protect Saudi Arabia from the punitive actions advocated by numerous U.S. lawmakers, the White House is in need of ways to highlight the kingdom’s geostrategic value to Washington and justify its reluctance to take action in response to the Khashoggi case.

In light of this context, the Arab Shield 1 maneuvers are a welcome development for the Trump administration and a sign that the U.S.-backed MESA initiative has potential to gain traction. But if such an alliance could be formed in the Middle East in the future, how much of a commitment can the Saudis count on Egypt, Jordan, and Kuwait to make? In fact, many obstacles remain to the successful creation of an Arab NATO. Before any regional security architecture can take shape, the divergence in threat perceptions between potential members must first be dissected. An inability to recognize such divisions, which make intra-Arab as well as Arab-Iranian relations extremely complicated, will inevitably result in history repeating itself and end in failure. Only a more realistic, nuanced understanding of regional relations, grounded in history, can address the challenge of moving from a vision for a new regional security framework to a reality of enhanced Arab-Arab coordination that can bring the war-torn Middle East closer to stability.