Are Salafi Parties Turning Against Morsi? 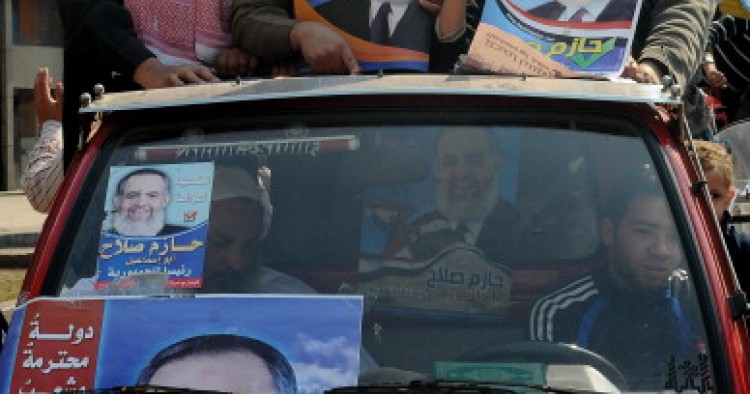 Mohamed Yousry Salama passed away from stomach disease on 24 March 2013. The 39-year-old had been a spokesperson for the Salafi al-Nour Party immediately following Egypt’s revolution. After falling out with members of the party, he resigned in August 2011 and eventually co-founded the Dostour Party with such progressive political figures as Mohamed ElBaradei, George Ishaq, and Gamila Ismail.

Though most Salafists have not banded together with non-Islamists as Salama did, the deceased politician’s actions are indicative of a recent trend in which certain Salafists have integrated with other parties and movements. Indeed, in January 2013 the most successful of the Salafi parties, al-Nour, which had won the second largest number of seats in the first post-revolutionary parliamentary elections, met with the left-leaning National Salvation Front (NSF). Through the meeting al-Nour and the NSF agreed to call for President Mohamed Morsi of the Muslim Brotherhood to form a new government, appoint a new prosecutor general, and create a committee responsible for amending the newly passed constitution.[1] Al-Nour subsequently sent a delegation to the president to raise the concerns.

The proclamation of these unified demands came as a surprise, particularly as they were announced in a profoundly polarized political landscape in the aftermath of Morsi’s presidential decree of November 2012 in which he granted himself far-reaching powers. Most Islamist parties backed the president’s decision, while non-Islamist groups demonstrated their disapproval in Tahrir Square and at the presidential palace. Hence the Nour Party managed to provide an alternative: an Islamist party that was not afraid to voice legitimate concern and criticism of the Morsi administration.

But such a position does not mean that al-Nour refrains from criticizing the NSF. Following clashes near the Muslim Brotherhood headquarters in Mokattam in March 2013, al-Nour head Younis Makhyoun accused the NSF of instigating the violence and announced that as a result his party would not participate in an upcoming roundtable with the group.[2]

As such, al-Nour has presented itself as the most independent political actor in the aftermath of the controversial presidential decree. In so doing, it has managed to cross the seemingly impassable line between an opposition boycotting any discussion with the president and a group of Islamist parties standing by his every decision. The party thus presents a more collaborative option, and one with which Egyptians who believe in Islam’s role in politics but have been disappointed by the inability of the Freedom and Justice Party, or FJP—the political arm of the Muslim Brotherhood—to deliver on pre-election promises can feel comfortable.

Other Islamist parties have followed a narrower ideological path. The end of 2011 saw many members resigning from al-Nour, and the party’s former leader, Emad Abdel Ghafour, formed a new party, al-Watan. Al-Watan claims to seek to implement ideology where al-Nour failed by putting “Shariah into practice” rather than just talking about it.[3] It has also fallen in line with other Islamist parties and has taken a much softer approach toward Morsi and the FJP. One of its closest allies is ardent Morsi and Muslim Brotherhood supporter Hazem Salah Abu Ismail.

Abu Ismail, who is often described as “controversial” and a “firebrand,” was disqualified from the presidential race due to his mother’s U.S. citizenship (which made him ineligible to run under the Egyptian constitution), and has not been involved in parliamentary elections. He is known for his enthusiastic support base that has dubbed itself “Hazemoon” (the Arabic plural of Hazem). In February 2013 he founded the Raya Party and has since used it to support Morsi. In fact, during the press conference in which he introduced al-Raya, he accused the NSF of attempting to “destroy Egypt” through its sustained protests and endorsement of civil disobedience.[4] And on 24 March Hazemoon reacted to Morsi’s condemnation of “inciteful” media by blocking entrances to the Egyptian Media Production City for the second time, searching for media and other figures known for their outspoken opposition to the FJP and other Islamist currents. They searched cars and attacked vehicles in which citizens such as human rights defender Hafez Abu Saeda sat.

Because Abu Ismail has not run in a political race, his influence outside his dedicated support base has not been tested. In an effort to expand his new party’s influence in the upcoming parliamentary elections, he recently formed a coalition with six other parties: al-Islah, al-Amal al-Gedid, al-Asala, al-Fadila, al-Shaab, and al-Islami. Al-Asala and al-Islah stand as the only parties in this “Umma Coalition” that competed for seats in previous elections, the former as part of the Islamist bloc headed by al-Nour and the latter as part of the FJP-led Democratic Alliance.

While Salafists including Abu Ismail have called for a united Islamist front, the current political climate points to the continued fracturing of religious political parties. As long as the FJP dominates the executive branch and maintains a significant bloc in parliament and non-Islamist forces are sidelined from the political process, Salafi parties will provide various levels of “opposition,” with some eager to ally themselves with the FJP (al-Raya and others) and others capitalizing on unmet expectations, providing an alternative (al-Nour).

The potential for Islamist-secular alliances such as the recent one between al-Nour and the NSF therefore depends in large part upon future NSF political participation. If the NSF maintains its boycott of the upcoming elections, Egypt’s next parliament will likely result in further Salafi success. In larger numbers, Salafists could act more independently and apply pressure to the FJP when desired. Yet such a situation would also likely cause the continued fracturing of Salafi groups as they jockey for position, thus opening up possibilities for collaborating with secularists.

However, even with an NSF boycott, secular parties’ reintroduction into electoral politics is inevitable. Their eventual successes will bring Islamist blocs together in order to counter liberal influence, sending upstarts like al-Nour back into the FJP fold where its policies are more closely matched.