Can Kurds Save Turkish Democracy? 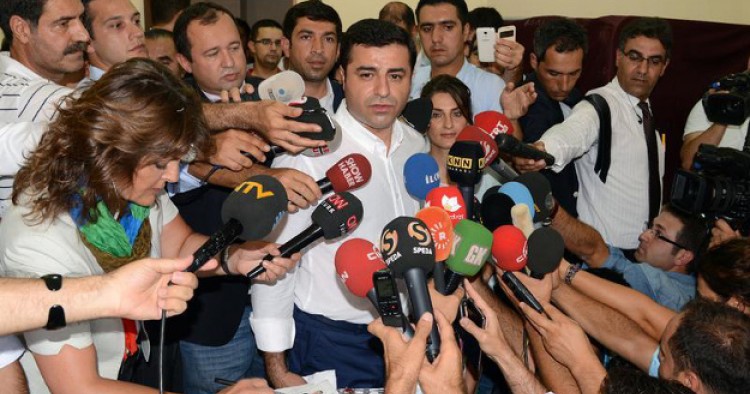 Turkey’s Kurds are playing a risky game. If they succeed, they can boost the country’s troubled democracy. If they fail, a further drift toward authoritarianism will follow.

Turkey’s Justice and Development Party (AKP) has taken an authoritarian turn after more than a decade of reform-minded policies. In an effort to stifle corruption investigations and root out members of its ally-turned-enemy, the Gulen movement, which the government is accusing of running a parallel state that seeks to stage a coup, the AKP has taken far-reaching steps to tighten its control over the judiciary, control the media and Internet, and clamp down on critics and protesters. Parliamentary elections to be held in June hold the key to the country’s future. If the AKP garners enough votes to change the constitution unilaterally and transform Turkey into a presidential system under Recep Tayyip Erdogan, Turkey’s domestic human rights record is likely to worsen and its democratic deficit likely to increase.

The AKP now holds 58 percent of the parliament’s seats. Public opinion polls suggest that the AKP is headed for another electoral victory, but judging by the results of the August 2014 presidential elections, it seems unlikely that the AKP will substantially increase its votes in 2015. In that case, the party has to garner the support of other parties to secure the two-thirds majority it needs to push through the constitutional amendment.

This makes the Kurds the kingmaker in Erdogan’s drive to introduce an executive presidency.

The Kurds, however, have embarked on a high-risk, high-reward strategy. The pro-Kurdish People’s Democracy Party (HDP) has recently announced that it will contest the June elections as a party as opposed to fielding independent candidates, as it has done in the past to circumvent the 10 percent electoral threshold that parties must secure before they can be represented in Turkey’s parliament.

Selahattin Demirtas, the charismatic leader of the HDP and former presidential candidate, intends to build on his successful 2014 presidential campaign. Demirtas garnered a historic 9.7 percent of the vote. His appeal to non-Kurdish segments of the country and his inclusive rhetoric focusing on the urgent need for rule of law, accountability, freedom of expression, and democratic consolidation won him praise and votes from groups like the LGBT community and workers. He also managed to gain votes from the Black Sea region and the Aegean and Mediterranean coastal cities — places that have traditionally been out of reach for the pro-Kurdish parties.

But analysts suggest that some who voted for Demirtas in the presidential elections will vote for their own parties in the parliamentary elections, making it difficult for the HDP to pass the 10 percent threshold.

But the jury is still out. If the HDP manages to pass the 10 percent threshold, it is likely to secure around 60 seats in parliament, giving the party considerable clout in Turkish politics at a time when contentious issues are being debated, such as switching to a presidential system, house arrest for PKK leader Abdullah Ocalan, and changing the anti-terror law.

Lack of an effective opposition has contributed to Turkey’s drift toward authoritarianism. An HDP that appeals to both Kurdish and non-Kurdish segments of Turkish society with a strong presence in parliament and a progressive platform focusing on equal citizenship, social justice, secularism, gender equality, ecology, and labor rights can fill that void.

The Kurds can also become the kingmaker in the peace process and prevent the AKP from unilaterally rewriting the constitution.

Failure of the HDP to get 10 percent will not only deal a blow to the peace process but also hand the AKP the two-thirds parliamentary majority it needs to transform the country into a presidential system under Erdogan. Under Turkish electoral law, if the HDP fails to garner enough votes to enter parliament, its seats will go to the runner-up in provinces that the HDP won, which will be the AKP, as it has a strong standing among conservative Kurdish voters.

A two-thirds AKP majority in parliament will pave the way for Erdogan to consolidate his executive presidency, in effect moving Turkey toward one-man rule. Erdogan’s response to the corruption investigation against him has shown the extent of his power and his general disregard for the basic safeguards of a democratic society. He already exerts immense control over the government, the parliament, the media, the judiciary, and civil society organizations. A presidential system will further tighten his grip.

As the HDP contemplates its political future, far more is at stake than the Kurdish peace process. The Kurds could steer Turkish democracy away from the authoritarian track.