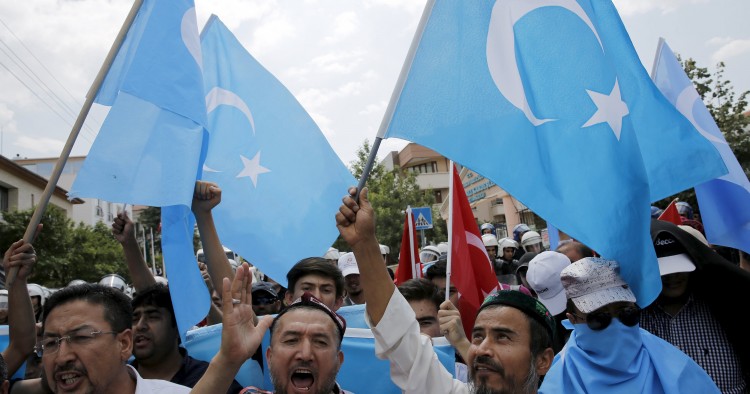 Since the failed coup attempt of July 15, 2016, Turkey has been looking east for new partners to decrease Ankara’s dependence on traditional Western allies. The election of Donald Trump has contributed to the further estrangement of Turkey’s relationship with its traditional NATO allies, leaving Ankara less comfortable remaining so reliant on Washington for regional security matters. Unquestionably, Russia has played the most influential role in Turkey’s strategic pivot of the past eight months. However, China also factors into Turkey’s eastward shift.

Despite China not being one of Turkey’s major trading partners in the 20th century, Sino-Turkish relations have grown significantly since Turkey’s Justice and Development Party (A.K.P.) came to power in 2002. At that time, bilateral trade was roughly $1 billion; last year that figure reached $27 billion. As the A.K.P. has sought to continue strengthening Turkey’s relationship with China, the party’s ideology and domestic political agendas have at times constrained the potential for Ankara and Beijing to deepen their links. Specifically, tensions between the Chinese government and the country’s Muslim-practicing Uighur minority in Xinjiang have fueled problems in Sino-Turkish relations. Yet at this point, given Ankara’s interest in diversifying its web of partners on the international stage, it appears that the A.K.P. leadership has taken stock of China’s value to Turkey and has decided to tone down its public displays of solidarity with the Uighurs.

Since the 19th century, pan-Turkish ideology has shaped Ottoman/Turkish relations with Turkic peoples scattered across the Middle East, Central Asia, and China. Pan-Turkish voices, who have promoted the unification of these people under the Ottoman and then later Turkish leadership, have always been a permanent reality in Turkey’s political scene. Seen through Turkish lens, the Uighurs are Turkic people who maintain a special relationship with the Turkish state and its cultural identity. For years, Turkey has welcomed Uighur activists. Officials in Beijing have accused their counterparts in Ankara of granting some Uighurs Turkish passports after they gave up their Chinese citizenship, as well as helping some flee Xinjiang Province.

Radical Islamist terror attacks in China, including the 2014 Kunming knife massacre, carried out by eight extremists from Xinjiang, resulted in the Chinese authorities imposing heavy security measures in northwestern China. The situation in Xinjiang following the crackdown enraged conservative elements of Turkey’s political establishment, as underscored by the expressions of anger across Turkish social media and even a number of violent acts that targeted Chinese nationals in Turkey.

In July 2015, tempers flared in China after some Turkish and ethnic Uighur protestors burned a Chinese flag outside of Beijing’s consulate in Istanbul following reports of a ban on Ramadan fasting in Xinjiang. The episode reportedly entailed the Grey Wolves, a wing of Turkey’s right-wing nationalist party, M.H.P., attacking tourists in Istanbul whom they believed were Chinese, but were actually Korean. Another mob attacked the Thai consulate after officials in Bangkok honored Beijing’s request to extradite more than 100 Uighurs back to China. Numerous Turks called for boycotting Chinese products. In response to the reports of a ban on Ramadan fasting, Turkey’s foreign ministry responded: “Our people have been saddened over the news that Uighur Turks have been banned from fasting or carrying out other religious duties in the Xinjiang region.”

Although the Uighur issue has been a thorn in Ankara-Beijing relations, officials in Turkey and China recognize that it serves both countries’ strategic interests not to let this one issue define bilateral relations. Not only would an improvement in Sino-Turkish ties open the door to increasingly valuable economic links, but there are also important security dimensions to Ankara and Beijing’s relationship. Given that at least 100 Uighurs from Xinjiang have joined the Islamic State (ISIS), as have at least 2,000 from Central Asian states where there is a history of ties with the Uighur cause, Turkey and China have a major incentive to enhance their counter-terrorism cooperation.

In China, there are legitimate concerns about such battle-hardened extremists returning to Xinjiang to wage violence in pursuit of their goal of establishing an independent “East Turkestan” and/or recruiting more Uighurs to join ISIS’ ranks. Earlier this month, ISIS released its first propaganda video with Uighur subtitles directly targeting China. It showcased ISIS’ Uighur fighters living in Iraq with their families, executing alleged informants, and threatening to come back to China. In light of this challenge, Chinese officials accept that maintaining a respectful dialogue with their counterparts in Ankara on the Uighur file is important. Meanwhile Ankara is now increasingly unsettled by Central Asian and Uighur fighters from ISIS set on spilling blood in Turkey, as witnessed by the New Year’s Day attack at Istanbul’s Reina nightclub.

In recent years, geopolitical factors have driven Turkey to pursue common interests with China, resulting in implacable pragmatism enabling both governments to compartmentalize the Uighur issue and strengthen bilateral relations in the economic domain.

Bilateral trade expanded significantly between 2010 and 2015. During the tense period from 2013 to 2015, the Chinese did not react to tensions in Ankara-Beijing relations by diverting their interests from Turkey. To the contrary, the Chinese sought to increase their investments in Turkey, paving the way for future opportunities in the world’s 18th largest economy. In September 2015, China Merchants Holdings International Co., along with Cosco Pacific and China Investment Corp., acquired 64.5 percent of the shares of Fina Liman, which was operating the massive Kumport for $920 million. According to Chinese bidders, the investment’s objective was to obtain control of the port. Last November, China’s Vice Premier, Wang Yang, visited the site to confirm the strategic value which Beijing places on such investments in Turkey

Chinese business interests in Turkey have always been discreet, yet persistent with their lobbying efforts even when tensions were at the utmost. Similarly, in the same critical period of 2013, the city of Guanzhou was organizing the Turkey-China Business Forum in Istanbul with the support of the Turkish Exporters’ Assembly, a prominent group of key exporting companies, and the association of Turkey China Business Council, a leading organization in Sino-Turkish relations. Another big name supporting the event was billionaire Hüsnü Özyeğin, the second wealthiest individual in Turkey. Similarly, seven key agreements to structure Turkey-China cooperation were signed at the end of 2015 with the Uighur issue drifting into the background. In that regard, China’s patient lobbying approach has been successful, and has been supported by Turkey’s interest in luring Chinese investment to help finance its massive infrastructure program.

Increasing estrangement of traditional Western allies over Turkey’s domestic and regional agendas encourages Turkey to seek alternative partners and bodes well for Sino-Turkish relations. China’s global investment and acquisition strategies always ranked as Beijing’s top priority when it came to defining relations with the Turks, which will create more fertile ground for stronger cooperation between Turkey and China in the years to come. Ultimately, Turkey and China’s deepening economic links are illustrative of Ankara’s quest to pivot east and Beijing’s determination to invest in an important country that serves as a hub for transcontinental energy and trade routes. Despite pressure from some members of a domestic constituency in Turkey, these two countries are likely to strengthen their bilateral ties without the Uighur issue derailing such progress. Moreover, with ISIS gaining recruits from the Turkic-speaking world and Ankara increasingly focused on threats of jihadist terrorism on Turkish soil, more security cooperation should accompany growing economic linkages.