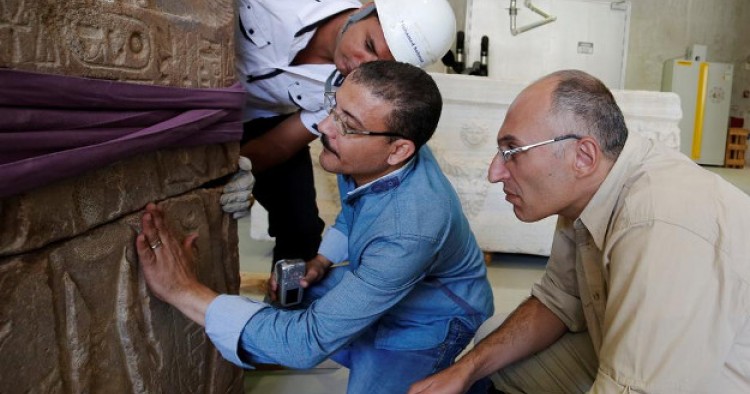 Egypt’s modern leaders may lack the means of their forebears when it comes to raising awe-inspiring monuments, but they still find impressive ways to promote the image of a confident nation. Widely touted “mega-projects,” like the Biblioteca Alexandrina, the “new” Suez Canal, and “New Cairo,” a skyscraper-studded capital city slated to replace the embattled 1400-year-old one, all come adorned with hyperbolic attributes and historic implications for all mankind. Enter the Grand Egyptian Museum (GEM), a “mega-heritage protection project” conceived in 1992, whose cornerstone was laid in 2002 and is now nearing completion.

On May 24, two signature items from the tomb of teen pharaoh Tutankhamen, a gilded wooden bed and a chariot, were transported 22 kilometers from downtown Cairo’s Egyptian Museum to their new home near the Giza pyramids. The event made global news and signaled the countdown to GEM’s April 2018 opening. Vincent Rondot, director of the Louvre’s Department of Egyptian Antiquities, calls the GEM’s construction “a very ambitious project, on the scale of the country’s Pharaonic legacy but also of the patrimonial and touristic issues facing 21st-century Egypt.”

Located on the edge of the Nile flood plain abutting the Giza Plateau, the starkly angular steel and concrete structure straddles the 50-meter height differential, enclosing a 60,000 m2 volume of largely uninterrupted space, with a half-kilometer-long façade of translucent alabaster. The ground floor, topped by a 35-meter-high atrium, features a monumental central staircase, its gradations marked with giant statuary climbing chronologically from the Greco-Roman period to the Old Kingdom. The combined effect of the architecture and exhibition design is intended to evoke the GEM’s overriding theme of “state, kingship and eternity.” Rondot noted that the exhibition program, developed by GEM's director, Tarek Tawfik, is “very tantalizing” and much anticipated in the “world of Egyptian collections.”

Appointed in 2014 by Egypt’s former minister of antiquities, Mamduoh el-Damaty, German-Egyptian Tarek Tawfik received his doctorate at the University of Bonn and is a former professor of Egyptology at Cairo University. According to Tawfik, GEM visitors will experience “five wows.” They will first experience the entrance, where a 14-meter-tall Ramses the Great stands sentry beneath the lofty atrium. Visitors will then see the staircase of masterpieces, which runs 24 meters up to the main exhibition hall, where they will encounter the third “wow,”—a stunning view of the pyramids framed across a two-kilometer stretch of desert. The Tutankhamen collection, featuring 5000 artifacts, is “wow” number four, and a solar boat, excavated from the foot of the Great Pyramid and prepared for display by a team of Japanese conservationists, is the fifth. Of the museum’s 100,000 artifacts, culled from the Egyptian Museum, provincial museums, and warehouses at archeological sites nationwide, 50,000 will be placed on permanent display, 30,000 of them for the first time. The other 50,000 will be stored, but available for research and to furnish temporary exhibitions in two designated galleries.

UNESCO’s assessment of the building’s “harmonious connection to the surrounding landscape” is purely aesthetic; the sun-scorched and sandstorm-prone location, immersed in miasma from the adjacent urban sprawl, suggests that the costs of cooling, dehumidifying, cleaning, and maintaining the facility will be monumental. But it’s easy to see why this particular design, by Ireland-based architectural firm, HeneghanPeng Architects, won the day. With its ridged roof miming desert topography and its intricate structural geometries, the GEM is sleekly futuristic and wonderfully huge. To Egyptians, staggering Atlas-like beneath the administrative weight of an almost unimaginably demanding material legacy, the GEM offers much-needed space and the chance for a fresh start.

The GEM’s iconic predecessor, the rose-colored neo-classical Egyptian Museum (built 1897-1902), is a monument to the colonialist history of the country’s antiquities service. Its venerable galleries are crammed with a bewildering array of masterpieces. Hundreds of cabinet vitrines filled with rows of ancient minutia, each item bearing a tiny, hand-numbered label attached with a perfectly angled pin, are themselves artifacts of the museum’s founding decades. The contents of the basement, brimming with a century’s-worth of archeological plunder, was recorded in crumbling ledgers until 2005, when a USAID-funded cooperative effort to create a data base inventory began. The older museum is now surrendering a selection of its treasures, to the distress of some Egyptologists who wonder if the GEM’s announced opening date is realistic, given the conservation necessities and transport risks for the objects involved.

The monoliths on the Egyptian Museum’s ground floor either arrived there in pieces or entered through a capacious back door, now walled off from the traffic-bound access ramps behind Tahrir Square. How they will exit is uncertain. Delicate items like Tut’s gilded wooden shrines, which have stood undisturbed since their installation in late-1929-1930, pose an even greater challenge. Beginning in 2015, the GEM hosted conferences specifically addressing the Tut collection’s needs. In 2016, the International Council of Museums’ Committee for Egyptology (ICOM- CIPEG) pledged assistance, assigning a team of conservation experts to conduct a month-long assessment of the shrines. ICOM-CIPEG’s chair, Dr. Gabriele Pieke, said in June 2017 that the aim “is to provide the objects with the best possible treatment and to develop the safest solution for [their] transportation.” The forthcoming investigation report is an early step in a complicated process.

When Howard Carter found Tut’s tomb in the Valley of the Kings in 1923, the four golden boxes were nestled with hairsbreadth precision inside one another, enclosing the sarcophagus, coffins, and bling-laden mummy. Built in pieces, because they were too large to enter the tomb whole, the shrines were assembled around the coffins in Tut’s cramped burial chamber with the help of orientation markings, a feat akin to building an Ikea Loft Bed Combo inside a closet. The largest shrine (4.7 meters long, 3.3 wide and 2.7 high), with its turquoise faïence decoration, is extremely fragile; all four shrines have long inhabited glass cases that lack climate or humidity control, causing their gilding to swell and crack. As the museum has no freight elevator, they will be carried down the stairs by hand, and will certainly receive careful attention, perhaps more than other pieces of equal importance but with less brand-recognition.

The GEM is clearly banking on the Tutankhamen Collection, including never before seen items, as its first and greatest draw. Post-2011, tourism declined dramatically in Egypt, and is recovering very gradually. This year, authorities hope to welcome 7-10 million visitors, still far from the 14.7 million that came in 2010, generating $12.5 billion in revenue in Egypt’s peak year. Tawfik predicts that by 2020, the GEM alone will attract 8 million people annually. The total complex (covering a half-million m2) will include a hotel, conference center, shops, restaurants, and extensive parks and gardens.

The GEM’s most impressive feature, however, is one the public will never see. Underneath the museum lies a football-field sized (7000m2) underground Conservation Center (GEM-CC) and storage area, with labs equipped for analyzing stone, wood, organic materials (textiles, leather, papyrus), inorganic materials (metal, ceramic, glass), and human remains. The facility is “fabulous,” says Egyptologist and mummy specialist Salima Ikram, noting its stable climatic environment and its newly “trained personnel who can become responsible caretakers of Egypt’s (and the world’s) heritage.”

The Japanese International Cooperation Firm (JICA) began working with GEM-CC in 2008, helping move some 20,000 artifacts and instructing local staff in the latest conservation and collection management techniques, including packing and transportation. Although additional finance is required to complete the GEM complex, JICA, which also funded Cairo’s Opera House, has shouldered most of the cost, originally estimated at $500 million, through a soft loan of $800 million.

The Japanese-Egyptian conservation team prepared Tutankhamen’s bed and chariot for transport in a crate outfitted with shock absorbent pads and devices for measuring heat and vibration intensity. The move took place on a flat-bed truck beneath the afternoon sun, during the punishing pre-iftar rush hour. A life-size color image of Tut’s lion-headed bed was attached to the crate, proudly advertising to gridlocked citizens the crate’s contents, destination, and of course, the Ministry of Antiquities. Time will tell if the GEM can fulfill its “mega-heritage preservation” mission. But with the project’s potential to boost Egypt’s image, lure travelers back,  and justify the commitments of funders and supporters, the stakes surrounding the GEM’s success are mega-high.