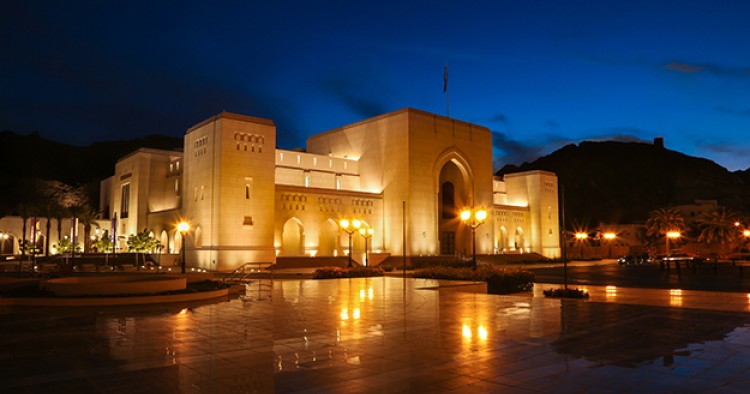 Director Jamal al-Moosawai wanted the new National Museum of Oman to be a space that grows and expands with its knowledge base, and is in tune with ongoing archaeological discoveries in the Arab country.

The result of a ten year collaboration between the Ministry of Heritage and Culture, the Royal Estate Affairs of Oman, Jasper Jacob Associates (J.J.A.), and Arts Architecture International Ltd (A.A.I.), the museum’s blend of the traditional and the contemporary, as well as its high-tech research facilities, make it unique in the region.

“We wanted the museum to be more than a dry display of stuff the ministry had in the vault,” A.A.I. principal David Wright, who designed both the building and the permanent exhibitions, said. “Rather our remit was to create a living institution that had both a research and a touristic aspect.”

The museum has adopted what Moosawi terms a “chrono-thematic approach to museography,” translated into a visitor experience spanning across 14 permanent gallery spaces.

Moosawi’s curatorial concept was for “an object driven experience, with more than 5,500 original objects on display, spanning some 2 million years of human presence in Oman.”

He proudly pointed to the museum’s 43 digital immersive experiences, Ultra High Definition cinema, interactive touch screens, and sensory devices that convey aroma, as well as its handicap accessibility and use of Arabic braille.

Wright suggested that Oman’s ongoing investment in museums speaks to the fact that while Oman is an OPEC nation, its oil revenues are not comparable to Saudi Arabia or the United Arab Emirates (U.A.E.).

“There is a deliberate focus on tourism as a growth area for the economy as oil—as a singular resource—is not enough,” he said. “Oman’s greatest asset is its cultural heritage.”

Oman has a wealth of heritage architecture, including historic forts and UNESCO sites like the prehistoric tombs of Bat and al-Ayn, which have their own special gallery in the museum, Wright said.

While not as rich as Mesopotamia, Oman’s 4,000-year-old Bronze Age civilization remains an unsung story, he said.

The 1992 discovery of the lost city Ubar—once the center of the ancient frankincense trail, mentioned in the Qur’an as one of cities destroyed by Allah for the decadence of its wealthy merchants, and referred to by T. E. Lawrence as the “Atlantis of the Sands”—is one of those stories told in the museum.

Unlike the U.A.E.’s cultural investments, which tend to run more toward contemporary art, Omanis celebrate and prefer to showcase their ancient heritage and civilizations, such as the relatively sophisticated Magan civilization.

“The depth and richness of heritage that Oman has is a distinct advantage in making museums about one’s own country,” Wright said. “The Omanis have a lot of stories to tell.”

The National Museum begins the Omani narrative on the ground floor, which channels a contemporary interpretation of a traditional Omani internal courtyard with surrounding riwaqs (ambulatories) on each level.

A central and introductory “land and the people” gallery explores Omani heritage through craft, as well as architectural features like ancient doors. It leads to a maritime heritage gallery exploring Oman’s seafaring past and then to an arms and armor gallery documenting military history. A gallery focused on the impact of man on the landscape includes displays on ancient cities, architectural and urban planning, as well as agriculture.

A grand helical staircase leading to the first floor offers a reverse timeline—going backwards from present day to prehistory, through a series of showcases of different periods acting like windows into the past.

The first floor ushers in more detailed chronological galleries, beginning with one documenting the old Frankincense trail. From there, galleries progress to explorations of “the splendors of Islam,” and “Oman and the world,” which examines the arrival of the Portuguese in the early 16th century, culminating in an exhibition about the Sultan’s reign during the Renaissance.

As a lynchpin between Europe and the Orient, Oman held a key strategic position in the Gulf, with colonies in India and Zanzibar. A special section in the museum is dedicated to the story of Sayyida Salima bint Said, the Omani princess from Zanzibar who infamously eloped with her German neighbor.

A gallery of Intangible Heritage—documenting music, dance, and storytelling—complements the Collections Gallery featuring the reference collection in open storage together with digital database terminals. The museum aims to express a contemporary vision of a historic nation. While Wright had to work with the architectural requirements of building in old Muscat, opposite the palace and bearing in mind the Sultan’s rather conservative tastes, it does manage to break down such formalism around the corner with a more eclectic garden front that wraps around an outdoor terrace.

A wedding of traditional Omani motifs—like perforated mashrabiyah screens (here in cast aluminum) and polished plaster feature walls evocative of saroj stucco—and contemporary architecture, the museum functions as a device for understanding a modern nation with a rich history.