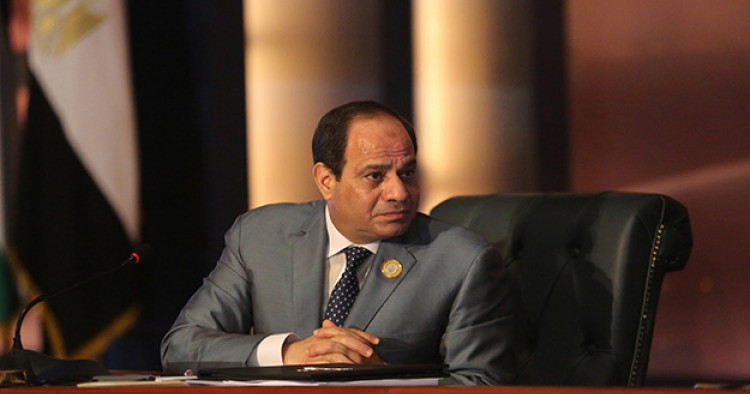 In the year since being elected to the presidency, Abdel Fattah el-Sisi has consolidated a ruling coalition, restored economic growth, and brought back considerable stability to the country after four years of turmoil. But this has come with a harsh crackdown on dissent, a decline in freedoms and human rights, and abuses by the police and judiciary. In the short term, the combination of nationalism, modest economic growth, and highlighting the war on terror is politically sustainable among a broad cross section of the population frustrated by years of uncertainty and economic decline. But unless a more comprehensive set of economic and political reforms is put in place over time, the long-term prospects for stability in Egypt will be in jeopardy.

On the economy, the indicators are pointing in a positive direction with GDP growth projected at 4 percent for 2015 and international investors showing a renewed interest in Egypt, especially after the Sharm el-Sheikh economic conference in March. Sisi took the long overdue step of cutting back on unsustainable fuel subsidies, pushed through a necessary new investment law over bureaucratic objections, and is bringing in the ambitious new Suez Canal project before schedule, with an inauguration planned for this July.

This economic stabilization and progress, however, is being achieved with exceptional and massive financial support from the Gulf countries, and the push for growth and investment is necessary but is not trickling down sufficiently to lower income groups. Unemployment is still high at around 13 percent. This combination of conditions and policies should be able to sustain modest growth rates of around 4-6 percent, and this is significant, but it is similar to growth rates achieved in the Mubarak years that ended in the uprising.

To create the ten million new jobs over the next decade that Egypt needs to employ its youth will require aiming for the growth rates of the Asian tigers, not the modest growth of the Mubarak era. And this will require a much bolder revamp of the civil service and bureaucracy, a scaling back of the public sector, a reduction in the role of the military industrial complex, a reform of the judiciary and legal environment, and serious modernization of the educational system, as well as investments in health, housing, and targeted social safety nets.

Egypt is not a petro power like Saudi Arabia, the UAE, or Russia; its growth cannot be achieved through fossil fuels, but by creating conditions that empower and raise the productivity and economic inclusion and contribution of the bulk of its population and integrate it as a competitive partner in the global economy.

Sisi’s relationship with the private sector is mixed. He regards the state and the military industrial complex as the main leader of economic development, and looks to the Gulf countries for massive public and private sector investments. He favors a strong presence for the Egyptian private sector in the country’s development, but does not appear to see it as playing a lead strategic transformative role similar to, say, what Asian companies played in transforming Japan’s or South Korea’s economies.

The Egyptian private sector itself is somewhat divided, with some companies wanting to recreate the cozy crony arrangements of the Mubarak years and live off the state and its monopolies, and others wanting Sisi to push for thoroughgoing reforms that would enable fair competition, strong domestic and foreign investment, and a positive race for more productivity and export share. They believe that Egypt can and should achieve the reforms and growth rates that not only the Asian tigers, but also India, Turkey, Brazil, and other countries have recently achieved.

Sisi’s relationship with the middle class is crucial, but also mixed. It is the main source of his popular support, as—like middle classes everywhere—most of its members want stability and a gradual improvement in their lot. Sisi has played to their needs and wishes, but has not included them in politics; this might prove a costly mistake.

Although, when threatened, the middle class will favor stability over participation, in the long run its members’ desires for wider margins of freedom, dignity, and political inclusion will not be rolled back. Again, petro states can afford to keep those demands at bay—potentially for long stretches of time—by more economic outlays from state to society, but countries like Egypt do not have that luxury. Egypt acutely needs a political and democratic path forward, and the country cannot achieve a stable future without democracy as an integral part.

Politically, Sisi rode a wave of popular support as many Egyptians desperately sought an alternative to the alarming rule of the Muslim Brotherhood and yearned for the stability of strong leadership after years of turmoil—particularly as other Arab states and societies crumbled around them. Sisi still has considerable popular support, but it is liable to decline unless more people see real benefits to their own socioeconomic conditions and progress in the public goods of dignity and freedom that many so courageously called for in 2011.

In addition to popular support, various arms of the state aided Sisi’s rise to power. Sisi has built a domestic ruling coalition that relies mainly on the core support of the armed forces, but also accommodates other strong arms of the state such as the police and the judiciary, and maintains the benefits for—and support of—the large bureaucracy. But a leader who relies heavily on his own administration for his political survival is not in a strong position to lead fundamental reform or change.

Millions of Egyptians were right in insisting that democracy does not mean the hijacking of the country by whatever party did best at the polls and is certainly not a ticket for transforming the country’s identity and working toward an Islamization of state and society. The new constitution of 2014 correctly lays out—on paper at least—the long list of personal rights and liberties and the civil nature of state and society that must be the basis of any sustainable democracy.

The still-postponed parliamentary elections that are the third step of the post-Morsi road map could be a modest step toward a resumption of some political life. They were supposed to be held in March, but now are not expected before September or October, if that. But even if and when they occur, Sisi must decide whether elections and a parliament will simply recreate the façade democracy that Mubarak’s regime played at so well, or whether he appreciates that a country like Egypt cannot be governed by authoritarian means forever, and that preparing the country for inclusive democratic government is as—or more—important than preparing the economy for productive and inclusive growth.

Coming to the end of his first year in office, the president is still in a strong political position. He is likely to finish his first four-year term, and might be in a position to win a second term until 2022. Beyond the initial goals of restoring stability, resuming economic growth, and fighting terror, Sisi must ponder what his long-term goals and legacy will be.

In addition to a strong economy, which he clearly wants, does he wish to hand over power—or have power wrested from him—to another military leader when his run is ended? Or can he use his current popularity and external support to define bolder economic and political goals, to encourage the growth of a viable non-Islamist non-military political alternative, and to bequeath a country that hopefully is not only economically viable, but also politically healthy?