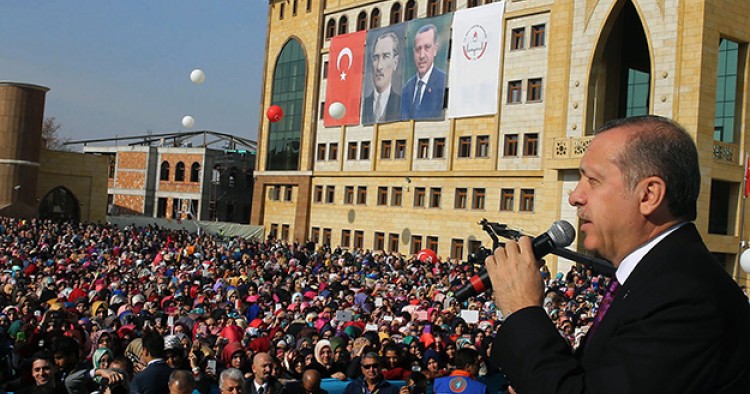 The ironies of modern Turkey’s history seem to be emerging in sharper relief. On Sunday, August 30, Turkey will celebrate its signal victory of 1922, which capped the struggle of Kemal Ataturk, Turkey’s founding father, to secure the country’s freedom. From the beginning of that war of liberation until final victory, Ataturk worked tirelessly to gain the support of all Turks for the fight for independence. That victory of 1922 was a military triumph, but it also reflected the power of a united people to bring a dream to reality.

What happened to that dream?  When President Erdogan’s AK Party won the elections of 2002 against a host of traditional parties, it looked like he was the man to help Turkey achieve the further dream of an open democratic society ready to step into the first ranks of regional and even global influence. He could stand on the shoulders of those who had come before and see farther and more clearly what needed to be done. He could be the inspiration for the region and the world to demonstrate that Islam and democracy could be brothers, not rivals.

Along the way, however, Erdogan replaced the country’s dream with his own ambition. Domestically, instead of expanding support he resorted to clever tactical political maneuvers to make his gains. Internationally, his attempts to show himself a leader met with obstacles. He had his reasons, to be truthful, for some of his major frustrations. The EU leadership, led by France and Germany, offered association rather than membership; the path to membership seems more remote than ever now. Regarding Cyprus, he endorsed a wise UN plan for resolving the island’s issues only to see the Cypriots of the south reject the effort in 2004. Then the deepest cut came with Israel. After he visited Israel in 2005 and led Israeli-Turkish relations to new heights despite personal misgivings, his efforts to mediate between Israel and Syria were scuppered by the Israeli Gaza operations in 2008, which convinced him that the Israelis were duplicitous.

President Obama offered Erdogan a great gift of partnership in 2009; he completely misunderstood what the new U.S. president was trying to do and decided to use his offer as leverage for narrow gains. Obama wanted to partner with Turkey to further and improve dialogue with the region by highlighting Turkey’s example of a peaceful and economically thriving Muslim majority country fostering democratic practices and ideals. Erdogan’s response was to use the partnership to aggrandize his influence domestically and to try to use the U.S. tie as a personal endorsement of himself as a regional and global leader. He was even sharply critical of the United States when it served his own domestic purposes. Obama, however, persisted in trying to deepen the relationship in the face of increasing signs of failure.

Internally and externally, his enemies increased in number, and his friendships became fewer. Externally, Obama finally gave up on him in 2013 after the Gezi Park demonstrations. Erdogan seemed not to have grasped the extraordinary gesture when the Americans treated him almost like royalty in Washington that June just before Gezi exploded. Gezi also cost him his liberal European-oriented Turkish supporters and the EU’s willingness to help rather than judge.

In the Middle East, even though there had been widespread admirers of the AK Party, that admiration ebbed. Many saw how he was dealing with his own civil protestors at home and how he was growing more authoritarian vis-à-vis the press and civil society, and many also recoiled from what they saw as partisan support for the Muslim Brotherhood. There were also reliable media reports based on intelligence sources that his government allowed Sunni ultra-extremists into Syria, where their adherents gave birth to the repugnant ISIS. Some of these extremists also appear to have spread among the growing Syrian refugee population in Turkey. Turks now acknowledge that these Syrians may be with them for years to come, comprising an added tension especially along the border.

Unwilling to put good governance first and to deal with widespread corruption in the party ranks, Erdogan turned on his previously most constant ally, the Fethullah Gulen movement, creating a crisis internally and externally. He used the AK Party parliamentary majority to prevent the investigation and prosecution of his cabinet members caught in corruption schemes. He alienated and dismissed his co-founder of the AKP, the widely admired Abdullah Gul, and prevented him from exercising any key and independent party role.

The economy has continued to slip, depending on a tide of Gulf funding to give a semblance of financial health. His government battered the lira by insisting on controlling interest rates in the face of inflation pressure. As the lira has declined further, more and more Turks are voting with their bank accounts, converting lira to dollar holdings. Foreign direct investment has suffered, and the trade current account balance continues to be in the red.

After suffering a sharp setback in elections in June this year that deprived the AK Party of its parliamentary majority, Erdogan ended peace talks with the PKK, an action intended seemingly to polarize public opinion and rally voters to his side. He then agreed to open Incirlik Airbase for U.S. use against ISIS, but exploited the opportunity mainly to attack the PKK. In recent days, he has laid the foundation for snap elections in November, with the aim of depriving the Kurdish-oriented HDP Party of its parliamentary seats by identifying it with the PKK.

Most recently, his statements that he is the de factor ruler of Turkey seem to have finally cast aside the constitutional definition of the Turkish president’s role. The country is in its latest phase of turmoil as the principal opposition parties, the CHP and the MHP, have refused to join in the constitutionally prescribed national coalition government to be formed in the run-up to snap elections.

The pattern now is fairly clear. Erdogan continues to confound his detractors, and he continues to achieve one tactical victory after another. The benefits for him and his party are intended to be immediate, and the costs are deferred to an indefinite future. Yet the total of those costs keeps on mounting. Moreover, as his approach leaves no room for compromise, he must overcome each succeeding challenge.  With each challenge the importance of winning the next victory grows.

Will the descending line of the benefits one day cross the ascending line of the costs these actions are incurring? Only the Turkish people will be able to deliver the answer, and they will have the opportunity once again in the new elections. The June elections showed that the Turkish people are now looking for something new. Erdogan’s desire to retain power is clouding his ability to see what his people are seeking.

Malcolm Gladwell, in his book The Tipping Point, describes how an idea becomes a new paradigm. It is not because some one person presents a view so astonishing that everyone immediately agrees. It is because of an accumulation of ideas and impressions that forms a deeper reality not yet visible but beginning to emerge. Once that new conviction has taken hold, its momentum carries the day. Erdogan has always had the ability to take the path that will realize the Turkish dream—a true democracy at peace and in harmony with itself, its national and religious past, and the world beyond its borders. Not too many years ago, he represented that hope. Whether he will step forward to provide that principled guidance depends on him— and the voters of Turkey—in a rapidly approaching moment of decision.

Remember what brought the victory of August 30, 1922: a people and a leadership fully behind a shared affirmative dream. The next phase of that dream—a truly democratic Turkey—is waiting to be made reality. As Turks celebrate this August 30—their equivalent of the American victory at Yorktown in 1781—will they be considering whether the momentum to realize their hopes may have to come from a new direction?