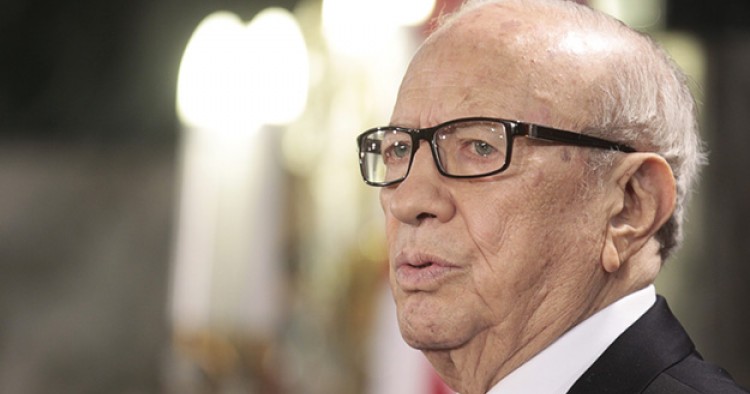 The Tunisian parliament on August 27 endorsed the new government led by Youssef Chahed, a month after the assembly dismissed the previous Essid government.

The media had predicted the dismissal of Essid, an independent agro-engineer and former minister of the interior, months ago, but this political transition has been confusing to the public. Essid’s government, which was in power for 18 months, was tossed out by the very MPs of the government coalition that had overwhelmingly renewed their confidence in his cabinet merely six months ago. Within the last 18 months, the parliament has been asked to vote on their confidence in the government four times, which does not bode well for the necessity of stable governance in Tunisia. In order to understand why this latest shift has taken place, it is necessary to look at the underlining factors that motivated Essid’s dismissal.

Vote of No Confidence: Letter of the Law, but not the Spirit

In the debate that preceded the vote to dismiss Essid, MPs from the opposition and a few from the government coalition pointed out the vote’s problematic timing as well as the political tint of the whole process. Members of the coalition that hoped to oust Essid responded in a parliamentary session on July 30 by stressing the country’s lack of economic growth and the alarming devaluation of the Tunisian dinar, ignoring that such assessments need a longer time frame to be meaningful. It is clear that the reasons behind Essid’s removal were political, rather than tied to the performance of his government. Besides, the much-criticized devaluation of the dinar was long understood by MPs to be a consequence of the government’s intention to follow recommendations by the International Monetary Fund.

The improbability of the timing of the no confidence vote, and the lack of clarity and consistency in the arguments for dismissing Essid and his government, could set a dangerous precedent that normalizes the removal of a government without a solid reason.

It is worth highlighting that, before requesting a vote of confidence, Essid made several declarations that he would resign, but subsequently retracted them. On July 18, during an interview on public television, Essid has acknowledged feeling pressure to resign and receiving direct threats, but refused to specify from whom. The parliament requested a plenary session with Essid, but he refused. Then, after tip-toeing around the topic for days, Essid declared that he could not hand over a letter of resignation, because such a resignation must be predicated on personal circumstances, such as an intractable illness. In the absence of a sufficient personal reason, he declared that he would request the parliament to vote to renew its confidence in his government. In doing so, Essid offered an interpretation of the constitutional article governing the transfer of power. In the absence of clarity in the 2014 constitution regarding the resignation of the head of government, it is within Essid’s right to do so.

Politically speaking, Essid’s decision to proactively seek a renewal of confidence reinforces the parliament’s power as a counterweight to the presidency. However, his decision to do so should not be interpreted as a purely democratic gesture; rather, one should read Essid’s motivation as an angry retaliation against President Beji Caid Essebsi and his assumed successor, his son, Hafedh Caid Essebsi. This episode is deeply important, since the mixed presidential/parliamentarian system described in the constitution is not yet clearly defined. The current practice of the young political system and the interpretations that are being accepted will shape Tunisia’s future. That is why much attention should be paid to how the constitution is being interpreted in the absence of a constitutional court—a troubling shortcoming in the post-revolutionary Tunisian political scene.

Essebsi has been widely criticized for his dynastic ambitions: he has enabled the growing influence of his son, Hafedh, along with that of his entourage of extended Tunisois families that includes Youssef Chahed, the proposed head of government to replace Essid. Previously, the president chose Chahed to coordinate a committee in charge of mitigating the crisis within Nidaa Tounes prior to the party’s implosion. He was then appointed secretary of state for fisheries and later minister of local government affairs in Essid’s government. The party’s internal conflicts between Hafedh and his two foes, Ridha Bel Haj, the former president’s chief of staff, and Mohsen Marzouk, the former political adviser to Beji, has allowed Ennahdha, the Islamist party, to become the largest party in parliament. Marzouk left Nidaa Tounes and created a new party called Machroo Tounes, or Project Tunisia, and Bel Haj resigned as chief of staff, but remained within Nidaa Tounes in open conflict with the president’s son. The animosity between Bel Haj and Essebsi’s son will certainly provoke further crises within Nidaa Tounes.

Essebsi has never publicly sided with his son, but he did begin to nudge Essid out of government as early as June. In a move to justify the dismissal of the head of government—and without prior consultation with the coalition—Essebsi called for a government of national unity that would extend beyond the initial four-party coalition of Nidaa Tounes, Ennahdha, the Free Patriotic Union, and Afek Tounes. At first, Rached Ghannouchi, the leader of Ennahdha, agreed to Essebsi’s initiative on the condition that he maintains Essid as the head of government. Essid’s initial support from the Islamists might have undermined his support from other coalition partners suspicious of Ennahda’s motivations and history. In any case, Essid’s dismissal is a collateral consequence of Hafedh’s victory over Marzouk, but this was not the only driving factor behind his removal.

In Tunisia, calls for a national unity government have been made only after major political crises. Essebsi made his announcement on June 4, in the middle of Ramadan and during a period of relative quiet in Tunisia. It was not the time for such an announcement, nor did the conditions require it.

The personal politics on display throughout the long process of Essid’s dismissal suggest that the new cabinet will be tightly controlled by Essebsi and his entourage. It goes without saying that the call for a government of national unity was just smoke and mirrors to disguise Essebsi’s own political agenda.

Essid was initially appointed by Essebsi for three reasons: Essid was not affiliated with a political party and, therefore, was perceived by the population as someone who would not merely work for his own partisan or career objectives. Secondly, Essid was thought to be politically malleable and, hence, could serve the president’s interests. Thirdly, Essid is from the Sahel region, the coastal area from Sousse to Monastir. All heads of government since independence, with the exception of Ali Laarayedh (2013-2014), have been from the Sahel, and the Saheli economic elite has always played an important, influential role in Tunisian politics.

Essebsi did not anticipate the growing influence of the Saheli businessmen who supported Essid in his political ambitions. By pushing Essid out, Essebsi has undercut the influence of these Saheli businessmen and replaced them with his Tunisois entourage. Essebsi addressed his son’s wish to put an end to the Bourguiba legacy of an ‘independent technocrat from the Sahel’ as the prime minister. In addition to his Saheli affiliation, some of Essid’s decisions did not sit well with Carthage.

When presenting his cabinet reshuffle last January, Essid made a radical, and revolutionary, decision to remove the management of local communities from the bailiwick of the interior ministry, an arrangement in place since the Ben Ali regime—a leftover appendage of the police state. Soon after, eagerly awaited municipal elections were delayed by the decentralization bill, the controversial draft of which failed to settle disputes over some key constitutional concepts, such as the right of regions to dispose of a portion of their natural resources or the concept of positive discrimination for regional development. There is reason to believe that Essid’s decision to provide early autonomy to local powers before the vote of the decentralization bill might have shaken the establishment and precipitated his dismissal. Chahed, formerly the minister in charge of local communities and regional development, will likely reverse his predecessor’s decision.

Although presented as a democratic exercise, the latest vote of no confidence by the Tunisian parliament hides the fact that Tunisian politics remains shaped by local regionalism and nepotistic attitudes. While Essid’s removal was a collateral consequence of Hafedh’s victorious seizure of control within the president’s party, the head of government was also likely dismissed for his decision to reduce the interior ministry’s control over local power. Essebsi’s call for a government of national unity was a handy trick to kill two birds with one stone. Chahed’s future margin of action as head of government remains unclear, but Essebsi will have succeeded in quietly concentrating all executive power into his own hands—a bitter reminder of the Ben Ali era and a striking contrast with the presidency of Moncef Marzouki.

Lastly, 121 experts requested in late July for President Barack Obama to visit Tunisia before his term ends in January. As the White House follows the latest developments in Tunisia, attention will focus on evaluating Essebsi’s political thumbprint and long-term legacy. Obama, who began his mandate with his historic Cairo Speech, might hesitate to end his mandate with a visit to Tunisia, whose democratic future is imperiled by Essebsi’s dynastic ambitions.