The Euro Zone Crisis, the Arab Spring, and the Migration Process in the Mediterranean 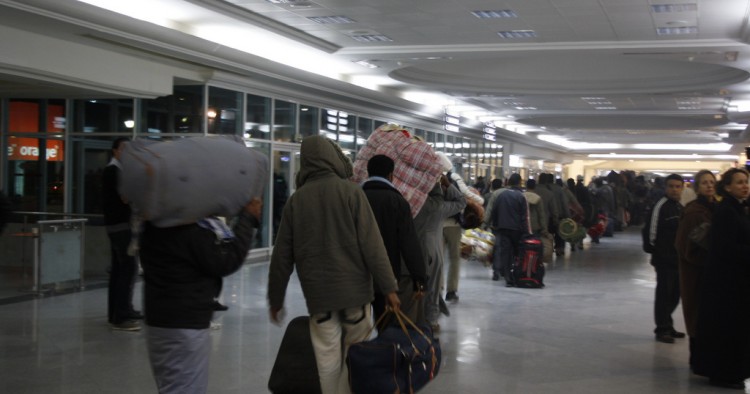 [Note: this Analysis was originally prepared in French, which is available below. Translation by MEI Staff]

It is not our intention in this paper to explore all issues relating to migration. Our goal is much more modest: to inform and understand according to existing circumstances, namely the Euro Zone Crisis and the Arab revolutions, the migration-development nexus in the context of globalization and its impact on the Euro-Mediterranean region. In this regard, we briefly consider the impact of globalization on migration processes that acted as an accelerant, the question of the European financial crisis and its effects on the Maghreb region, and finally the Arab Spring’s impact on migration policies in Mediterranean countries.

Globalization and migration process in the Mediterranean

The majority of studies on international migration emphasize in particular the unequal development between the North and the South to explain the process of migration. Prospects of better living conditions in terms of job opportunities, wages, safety, education, health motivates most people to migrate.[1]

In this respect, it is important to emphasize that the phenomenon of globalization —understood as a process of movement of goods, capital, and people — and other factors such as the geopolitical upheavals of the 1990s (e.g., the collapse of communism, ethnic conflicts in Africa, etc.), have spurred migration, especially from the South (i.e., from Africa, Asia, Latin America) and towards the North (Europe, North America).

In this sense, globalization has contributed greatly to migration: it has helped the poor and marginalized people of the world to win a share of their liberty, to benefit from lower costs of international transport, to gain free access to information through new information and communication technologies (e.g., the Internet, satellite channels, etc.), diversify the technological tools of financial transfers of funds (e.g., Western Union, banks, etc.). Finally, globalization led to closer links with start-up companies.[2]

Paradoxically, however, the result of emphasizing the development of international flows of goods, services, and capital and prioritizing the strengthening of international trade is neglecting the human aspect (i.e., the vulnerable populations whose status as irregular migrants excludes them de facto from enjoying legal protections as recognized by the Charter of Rights).[3] That is, one of the most important contradictions of globalization is that it ignores human rights in the international mobility of people.

The relationship between the European Union and the Arab Maghreb has long been characterized by misunderstandings and asymmetries in all areas. The issue of migration and its management is one of them.[4]

Analyses of the positive and negative effects of migration on the economic growth of the country of origin and the social welfare of households remaining in the country are muddled. The challenge of assessing the economic effects of migration on source countries is made much more difficult when we take account of external factors such as globalization, the financial crisis, and the Arab Spring.

The special relationship between the European Union and the Maghreb is a perfect example. The Euro-Mediterranean economic space appears to possess all the ingredients for intensive migration flows: the northern littoral countries are developed and prosperous while the southern littoral states are underdeveloped, under-equipped, and poor; moreover, the economic and human ties between the Maghreb and Europe are historically important. Note the wide income disparities between North and South: Europe (with a population of 165 million) has an average annual income of about 19,000 euros, while average annual income in the Maghreb (whose population is 265 million) is just 1,900 euros.[5]

The euro area and the Maghreb have been woven together economically since colonization. Indeed, the EU is an essential component of the Maghreb’s economic globalization. The European Economic Area is the destination for most of the Maghreb’s exports (e.g., oil, gas, phosphates, agricultural products, etc.) as well as the source of most of its imports, inward foreign direct investment (FDI), and overseas development assistance (ODA). For example, 80% of Moroccan exports depend on the European market; the same is true for Algeria and Libya, which export most of their oil to the Euro zone and a large share of their capital and consumer goods from Europe. In short, the Maghreb countries are heavily economically dependent on the European market.

In human terms, Europe is home to a large number of North African nationals. About 3.5 million people of Maghrebi origin live in France alone. Many developing countries have encouraged the emigration of their nationals to European countries experiencing a deficit of labor in certain sectors such as mining, construction, and civil engineering. Such is the case of Algeria, Tunisia, and Morocco, as well as sub-Saharan countries. This emigration, in addition to its contribution to the alleviation of unemployment problem in the source country, has been even more important in meeting household needs through remittances. These migrants remit billions of dollars annually to their countries of origin. For example, remittances from the euro area accounted for 6% of Morocco’s gross domestic product (GDP) in 2010.[6]

Because of these strong human ties and trade, the Maghreb is particularly affected by the economic and financial crisis affecting the Euro zone. This heavy dependence in terms of imports, tourism, foreign direct investment, official development assistance, and remittances of migrants has rendered Maghreb countries far more exposed to Europe’s economic woes than to those of other countries adversely affected by the global financial crisis.

Indeed, the crisis in the euro area has resulted in a decline in external demand for raw materials and other products. The drop in exports to Europe has, in turn, compressed domestic demand and created tensions on the labor market. This will result in slower economic growth. Additionally, the intensity of the crisis in the euro zone has pushed EU members to reduce the level of official development assistance (ODA). Thus, according to OECD figures, ODA fell by 2.7% in 2011. ODA by Greece and Spain, the European countries hit hardest by the financial crisis, plummeted by 32.3% and 32.7%, respectively, in 2011 from the previous year. France’s development assistance fell to 5.6% of the world total of ODA in 2011.[7]

Whereas European foreign direct investment (FDI) in the Maghreb had risen steadily during the 2000s, inward investment from Europe has dried up due to the combined effects of the global financial crisis and the outbreak of the Arab Spring. Morocco, which receives most of its FDI from the Euro zone (96%) experienced a 26% decline in FDI in 2011.[8]

It appears that this crisis reflects more than ever the economic fragility of the Maghreb vis-à-vis Europe and should encourage these countries to strengthen their ties within a framework of regional economic integration, i.e. the Arab Maghreb Union (UMA).

However, it should be noted that the economic recession experienced by the countries of the European Union has a differentiated impact among the Maghreb countries. Morocco and Tunisia are more vulnerable to this crisis (i.e., a decline in tourism to Tunisia and to a lesser extent Morocco). Although Algeria seems relatively unscathed, it has not escaped completely the ill effects of the financial crisis because of its strong trade dependence on the European Union. In any case, economic growth declined throughout the Maghreb compared to previous years and a downward or upward trend will depend greatly on the economic health of the countries of the European Union.

Arab Revolutions and migration in the Mediterranean

The Arab revolutions affecting countries like Tunisia, Egypt, Libya, Yemen, and Morocco have further complicated the management of international migration since each country has received thousands of people on its soil fleeing civil war or political turmoil. Tunisia, for example, faces an unprecedented influx of Libyan refugees. Europe has not escaped this tragedy since thousands of migrants from Tunisia and Libya have landed on soils French, Spanish, and Italian shores.

Before the uprisings, the waves of migration from sub-Saharan countries (Niger, Mali, Nigeria, etc.) and towards Europe were contained by authoritarian regimes (e.g., Tunisia, Libya, Morocco, etc.) that had built transit centers on their soil to curb illegal immigration. These transit centers, built in cooperation with the European Union, shared responsibility for the management of irregular migration. However, the efforts to manage irregular migration — illegal, unjust and arbitrary — called into question the right of asylum and put in place procedures for forced deportation.

The facts show that the policies that restricted the movement of people between the two shores of the Mediterranean, zealously applied by countries such as Tunisia and Libya, deprived excluded and marginalized youths the right to move freely and achieve their dreams across the Mediterranean, thereby contributing to the underlying conditions that triggered the Arab Spring.

In conclusion, we can say that if remittances as a factor of economic development of the undeniable fact that they participate in the balance of macroeconomic variables and reduce poverty in the countries, these claims are not always substantiated scientifically. Instead, many studies show that these contradictory migrant remittances are mainly used to reduce the level of poverty of households will spend more on consumer goods, health, and education.[9] Moreover, these transfers may constitute a disincentive to work for local companies, without bothering to look for a permanent job or start a business. Thus, migrant remittances have multiple benefits on households, but they may not necessarily spur economic development.

Moreover, in terms of welcoming new migrants, the policies which manage migration flows from the Maghreb to Euro-Mediterranean countries have been ambivalent. The protection of migrants’ rights is neither explicit nor sharply defined in the sense that these countries manage this phenomenon according to circumstances more concerned with national and international public opinion than substantive issues such as asylum or the definition of refugees as their basis.[10] Thus, the financial and economic crisis that now severely afflicts the euro zone has led to the imposition of new migration restrictions and the hardening of reception conditions for new immigrants in these countries, thereby increasing barriers to access the enclosed space that the European Union has become.[11] The Arab Spring should be a prelude to greater democratization and economic development in the Maghreb, opening the prospect for a better distribution of wealth among the population of these countries. This is the only guarantee for political stability and economic prosperity which, in turn, could reduce migratory pressures on Europe.