In the face of Islamic laws, Iranian women are reappropriating Ancient Persian culture 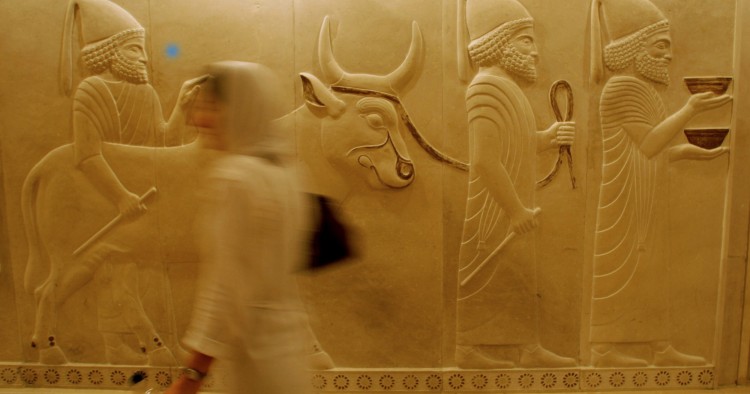 Islamic laws for women in Iran do not reflect the cultural norms, values, and spiritual beliefs of the majority, especially women. The Islamic state of Iran, through laws and regulations based on the government's interpretation of the Islamic tradition, hadith, and Quran, forces women to cover their hair and follow strict law concerning clothing. For example, according to Iranian Civil Law, Article 134, the sentence for women showing her hair without a hijab is 15 years in prison.  Women are the group that suffers the most in Iran since they are not equal to men according to civil law. For example, if a car hits a pedestrian, the punishment for the driver and compensation to the victim are halved if the latter is a woman. A married woman may not obtain a passport or travel outside the country without the written permission of her husband. Thousands of women are abused sexually through temporary marriages for women and girls as young as 13 years old. Justification of civil laws for women based on the state interpretation of Islam does not have sufficient religious, cultural and normative power to sway the majority of Iranian women.

There are two major sources of tension between the Islamic state on one side and the majority of women on the other side. The first involves the restrictions by the Islamic state on women’s clothing and the suppression of women’s protests against the lack of personal freedom in terms of marriage, travel, and employment.  The second major tension between the Iranian state and women relates to their social and political role. The Islamic state faces a challenge: millions of young women who do not see themselves primarily as housewives. These women often strive for higher education, demand the same job opportunities as men, and equal political representation, such as the freedom to run in a presidential election.

Mina, a graphic designer who lives in Tehran, told me over the phone “Iranian women under age 24 were born with internet and have access to smart phones and social media. They know how women live in other parts of the world and they want the same level of freedom for themselves. They have learned to say no to things they don’t like and they don’t always follow religious rules and traditions.”

The revival of the Ancient Persian woman

Women’s rights such as the freedom to travel, choose their clothing, and choose their partner are aspirations for young women today but women living in Iran more 2500 years ago took them for granted. As evidenced by archival research, women in ancient Iran could own land and conduct business, receive equal pay, travel freely on their own, and in the case of royal women, hold their own council meetings on policy.” King Cyrus (r. c. 550-530 BCE) established the Persian paradigm of freedom of religion and expression in his empire, providing a level of autonomy to women of every class. In ancient Iran, women could travel on their own, The king’s mother, wife, and daughters had also their own entourage, staff to attend their needs, and were given places of honor at banquets alongside distinguished male guests. The principal wife held her own court and could sign agreements with her own seal. She had unlimited access to the king and was welcomed at official visits from foreign dignitaries. Iranian women would continue to enjoy this high status until the fall of the Sassanian Empire to the invading Arab Muslims in 651 CE.

After the fall of the Sassanian Empire, women could no longer travel without a male escort and permission, could not own or conduct their own business without their husband or father’s permission, and were no longer free to choose their own mate. Women were among the ranks of those who protested against the Abbasid Caliphate. Most prominent among them was Banu Khoramdin (795 CE to 838 CE), who is still a celebrated figure, despite the desire of Shi‘a clerics to suppress such veneration.

In Tehran and other large cities we are witnessing women’s interest for using Ancient Persian symbols of Zoroastrian religion in jewelry instead of Islamic symbols. The production and use of jewelry with Ancient Persian symbols have perturbed some clergy members who claim that these symbols represent false gods. Nonetheless, the jewelry is becoming more popular among young women. Young mothers choose the ancient Persian names of queens and female military generals for their daughters. One of the popular names for girls is Artimes, who in 480 CE became one of the first women admirals in Iran.

Today, the wives and daughters of the Iranian president Hassan Rouhani, the supreme leader Ali Khamenei, and even an elected female member of the Iranian parliament (Majlis Islami) or female members of the government can not travel abroad without an official permission from their husband or father.  In today’s Iran, married women must obtain written permission from their husbands to apply for identity cards and passports (Passport Law, Article 18 & ID Cards application instructions). Furthermore, the law hinders women’s abilities to travel freely (Civil Code, Article 1114). The government requires exit permits for foreign travel for all citizens and married women are not allowed to travel outside the country without prior permission from their husbands. Recently the Iranian and international newspapers reported that Samira Zargari, the coach of the Iranian women’s Alpine skiing team,  was barred by her husband from traveling to Italy for the world skiing championships on February 24. 2021.

Forough Abasi, a prominent Iranian skier, made an appeal on behalf of women’s rights in general and Zargari’s in particular. This is not the first such case in the Islamic state of Iran; several well-known Iranian women’s sport stars were barred from going aboard by their husband.

The Iranian Islamic state is challenging millions of women who do not accept all the discriminatory laws and regulations. Iranian women take many of their personal and social freedom as obvious rights, which are not the unique heritage of the West, but descend from the ancient Iran as well.

Fariba Parsa is the founder and president of Women’s E-Learning in leadership (WELL) and a non-resident scholar with MEI's Iran program. The views expressed in this article are her own.