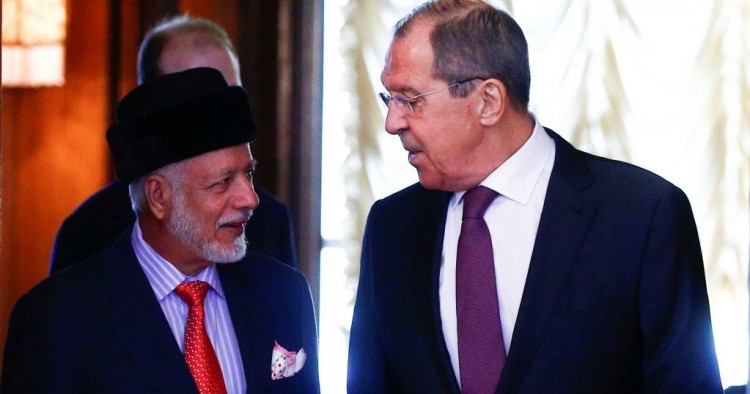 On Feb. 12, the director of Russia’s Foreign Intelligence Service, Sergei Naryshkin, made an official visit to Oman. During his trip to Muscat, Naryshkin engaged with senior Omani officials on strategies to de-escalate tensions in the Persian Gulf, counterterrorism cooperation, and approaches to conflict resolution in Syria and Yemen. Even though Naryshkin’s visit was overshadowed by revelations that Russian Security Council Secretary Nikolai Patrushev had visited Oman concurrently with Ukrainian President Volodymyr Zelensky on Jan. 5, it highlighted the growing strength of Russia’s diplomatic relationship with Oman.

The improvement in Russia-Oman relations became apparent after the 2011 Arab uprisings, as the two countries adopted common positions toward regional security crises. Oman was the only Gulf Cooperation Council (GCC) country that did not suspend diplomatic relations with Syrian President Bashar al-Assad’s government in 2011, and this policy was viewed favorably in Moscow. Oman’s opposition to the Saudi-led military intervention in Yemen dovetailed closely with Moscow’s views on the war, and Muscat’s consistent engagement with Qatar and Iran aligns closely with Russia’s policies.

Despite these common perspectives, Russia has periodically struggled to convert its ideational synergies with Oman into a more expansive diplomatic partnership. Although Oman established diplomatic relations with the Soviet Union in September 1985, the USSR’s support for the Marxist Dhofar Liberation Front during the 1970s caused Omani elites to view Russia as a negative geopolitical force. Russia’s military intervention in Syria frustrated Omani officials, as it occurred at a time when Oman was trying to convince Assad to end the civil war. To illustrate Syria’s role as a wedge issue in the Russia-Oman relationship, Kirill Semenov, a Moscow-based defense analyst specializing in the Middle East, said in November 2017 that the “Russian-Omani relationship will largely depend on trust,” and expressed concerns that Russia’s actions in Syria would restrict the scope of its partnership with Muscat.

Over the past year, however, the relationship has improved significantly, as Russian and Omani policymakers have consulted each other on a more frequent basis and promoted mutually reinforcing visions for regional security. Although the two also share common positions on the Israel-Palestine conflict and Qatar, Moscow’s outreach to Oman has been most successful in Syria and on de-escalating tensions in the Persian Gulf.

On Feb. 18, 2019, Russian Foreign Minister Sergei Lavrov discussed Syria with his Omani counterpart Yusuf bin Alawi. After their meeting, Lavrov stated that the two countries have a “common stand on Syria.” Russia and Oman’s shared position on Syria is underscored by their common support for UN Resolution 2254, which calls for a Syrian-led political transition, and by Oman’s willingness to assist Russia’s efforts to secure Assad’s re-entry into the Arab League. During their bilateral meeting, Lavrov and bin Alawi also discussed refugee repatriation in Syria, and bin Alawi publicly praised Russia’s leadership role in Syria’s peace process.

Developments since the meeting reaffirm the positive momentum of Russia-Oman cooperation on Syria. In keeping with its traditional role as a bridge between Syria and the GCC, bin Alawi travelled to Damascus in July 2019 to meet with Assad, and Omani companies participated alongside their Russian counterparts in the September 2019 Rebuild Syria Expo. Although Russia’s cooperation with the United Arab Emirates (UAE) on Syria has expanded considerably, Oman’s unwillingness to pressure Moscow on Iran’s presence in Syria ensures that Muscat remains a useful, if no longer exclusive, GCC partner for Russia in Syria.

Russia’s Gulf security plan, which was unveiled in July 2019, mirrors Oman’s long-standing approach to regional affairs, as it called for multilateral dialogue between the Gulf monarchies and Iran. Accordingly, Russia viewed Oman as the most receptive GCC country to its vision for collective security in the Gulf. Just three weeks after Russia’s collective security plan for the Persian Gulf was unveiled, Russia’s Deputy Foreign Minister Mikhail Bogdanov traveled to Muscat to meet with Omani officials. During Bogdanov’s visit, Russian diplomats directly participated in Oman’s dialogue facilitation initiatives between warring factions in Yemen. On Aug. 31, Bogdanov met with Houthi chief diplomat Mohammed Abdul Salam and members of the Southern National Salvation Council, a faction based in eastern Yemen’s al-Mahra district.

Despite this progress, the long-term potential of Russia’s bilateral relationship with Oman is restricted by uncertainties about the impact of Sultan Qaboos’ death on Omani foreign policy and the limited scope of bilateral economic relations. Although Sultan Haitham has vowed to perpetuate his predecessor’s approach to regional affairs, Russian media outlets have raised doubts about Oman’s future reliability as a diplomatic partner. Since the death of Sultan Qaboos, Russian commentators have expressed concerns about a spillover of Islamic extremism from southern Yemen to Oman, and trepidations about a potential Arab Spring in Oman. Given these concerns, Naryshkin’s visit to Oman could have been triggered by Russia’s desire for reassurance about the foreign policy vision of the new sultan.

The continued strength of the partnership also depends on Moscow’s ability to expand its economic relationship with Muscat. Although the volume of trade between Russia and Oman grew by 61.9 percent in 2018, it remains low in absolute terms at $143.3 million, and the sustained expansion of trade relations depends on Oman’s willingness to mirror the UAE’s investments in the North Caucasus. The Russia-Oman Business Forum, which was established in 2016, and Oman’s relaxed visa requirements for Russian nationals, could also stimulate future economic growth, but the pace of Moscow’s economic engagement with Muscat continues to lag behind that of other Gulf countries.

Despite negative historical legacies and Oman’s close alliances with the UK and the U.S., diplomatic relations between Russia and Oman have advanced considerably over the past 12 months. As Oman seeks to diversify its relationships with non-Western powers and hedge against U.S. President Donald Trump’s inconsistent foreign policy toward the Middle East, relations between Russia and Oman could continue to strengthen in the months to come.

Samuel Ramani is a doctoral candidate at the University of Oxford’s Department of Politics and International Relations. His research focuses on Russia’s post-1991 foreign policy, and Russia’s relationship with the Middle East. He can be followed on Twitter@samramani2.

Balancing the Books: A Deep Dive into Fiscal Policy and Diversification in Oman