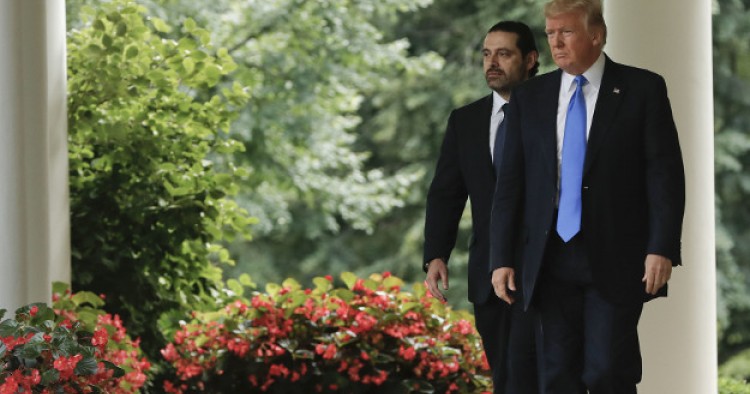 The last time Lebanese leader Saad Hariri met with a U.S. president—in January 2011 with Barack Obama—he began the visit as prime minister and ended it as a private citizen. Just as Hariri began his summit with Obama, Hezbollah members and their allies resigned en masse from the unity government, leading to its collapse. Last week, Hariri—who regained the post of prime minister in December 2016 after agreeing to support the election of Hezbollah ally, General Michel Aoun, to the presidency—held talks with President Donald Trump and other U.S. officials in Washington. Hezbollah was once more busy back home. It launched a military offensive against Hay’at Tahrir al-Sham, an al Qaeda affiliate previously known as Jabhat al-Nusra, in the hills of eastern Lebanon, and roundly defeated them. Hezbollah’s actions underscored the tensions in the Lebanese state’s coexistence with the group even as the trip to Washington indicated progress in U.S.-Lebanese relations.
Hariri led an official delegation that included Foreign Minister Gebran Bassil and the central bank governor Riad Salameh. They visited Washington to consolidate relations with the new administration and to argue for continued U.S. support for the Lebanese Armed Forces (LAF), as well as for refugee assistance and economic investment. Hariri also urged policymakers in Congress, the Treasury Department, and the International Monetary Fund to ensure that the new sanctions against Hezbollah do not destabilize the Lebanese banking system.

Hariri’s Washington meetings seemed generally successful. In a joint press conference with Hariri, Trump praised Lebanon’s armed forces and extolled the country’s generosity in receiving Syrian refugees. Hariri said that he had received assurances that U.S. aid to the LAF would remain at the previous $80 million per year level and would not be slashed, as had been proposed in the White House’s own budget. The day after the meeting, Washington announced $140 million in additional refugee aid to Lebanon. On the issue of sanctions, much remains unclear. Trump said he would make an announcement about that later, but no announcement has been made so far, and the Lebanese delegation visits with officials on the Hill did not bear conclusive results. Overall, however, the prime minister had a good rapport with the new U.S. president and he moved the needle forward on several bilateral issues.

The biggest problem for Hariri during the talks was that he could do nothing about Trump’s potentially divisive language during the meeting, such as when he lumped Hezbollah, which has members that are a part of Hariri’s government, with terrorist groups like the Islamic State (also known as ISIS) and al Qaeda. When Trump said that Lebanon was “on the front lines in the fight against ISIS, al Qaeda, and Hezbollah,” the prime minister could only squirm uncomfortably, knowing that Hezbollah would take issue with such a statement back home. Moreover, during meetings with think-tankers and journalists, Hariri acknowledged and expressed regret that it was Hezbollah, not the Lebanese army, that had launched the offensive against Hay’at Tahrir al-Sham. He faced regular questioning in Washington related to Hezbollah’s influence in Lebanon and he has faced criticism from Hezbollah and its allies since his return to Lebanon, over the weekend, for not objecting to Trump’s characterization of the group.