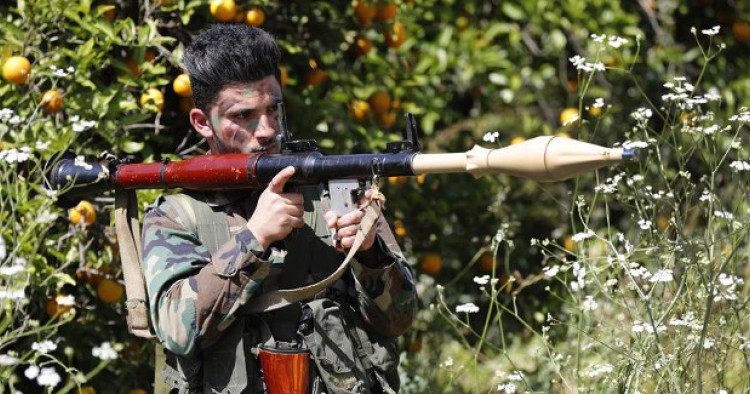 Israel and Hezbollah have recently raised the profile of their long quiescent front across the Blue Line border. Warnings have increased that a conflict will soon engulf Lebanon, and perhaps even draw in the United States. Hezbollah’s leader Hassan Nasrallah has threatened to attack Israel’s nuclear reactor at Dimona and Israeli chemical installations in Haifa. Israel has matched this hot rhetoric with warnings that the next war, in which Israel’s target will be Lebanon itself, can only be prevented by a U.S.-led effort to disarm Hezbollah.

Notwithstanding these verbal pyrotechnics, it is clear that absent some terrible miscalculation, neither Israel nor Hezbollah want a war at present—and certainly not one in Lebanon. The current tensions are best understood as a reflection, and not the only one, of moves by the region’s many antagonists to position themselves for the endgame in Syria.

Lebanon has long been the principle arena for the conflict between Israel and Hezbollah, and it remains so. But today, both want to exploit the standoff across the Blue Line in order to maximize their clashing interests in post-war Syria.

For Israel, this means keeping Hezbollah—and its military arsenal in the south—at center stage and on the defensive before the international community in order to maximize pressure for the retreat of the Hezbollah-Iran axis in Syria, especially opposite the Golan. Hezbollah, for its part, telegraphs readiness leavened by a sober appreciation of the terrible costs of another war over the south, even as it maneuvers for strategic gains against Israel by deploying forces in Syria.

Israel and Hezbollah have faced each other on opposite sides of the Blue Line since the mid-1980s. In 2000, Israeli troops retreated from Lebanese positions initially established in 1976. Since then, despite unremitting hostility, the 79km border has been what UNIFIL describes as “generally calm.” This state of affairs was briefly shattered more than a decade ago, in 2006. More than 1,200 Lebanese, mostly civilians, and 160 Israelis, most of them troops fighting Hezbollah, were killed in the war. Memories of the war are still fresh on both sides of the border.

The costs of another war in Lebanon have been seared into the consciousness of both antagonists and their respective domestic constituencies.

"We did not think, even one percent, that the [incident precipitating the conflict] would lead to a war at this time and of this magnitude,” acknowledged Nasrallah after the August 2006 cease-fire. “You ask me, if I had known on July 11... that the operation would lead to such a war, would I do it? I say no, absolutely not," he said in an interview with Lebanon's New TV station.

Since 2006, each has applied lessons learned during the conflict as they prepare for the next round. Unwritten but nonetheless well understood “rules of the game” keep hostile confrontations to a minimum. UNIFIL head, Major-General Michael Beary, recently explained to visiting U.S. Ambassador to the U.N. Nikki Haley that the “situation is good and there is no need for a change [in strategy].”

The absence of conflict may be comforting, but it is a deceptive veneer, veiling what is an inherently unstable environment, capable of degenerating into war at any time. Hezbollah has increased its offensive missile capacity by several orders of magnitude since 2006, while Israel has continued to modernize its arsenal and undertaken wide-ranging efforts to build border defenses.

While neither Hezbollah nor Israel desires to advance the date for yet another military confrontation, both parties have, by intent or miscalculation, raised the profile of the continuing and potentially volatile standoff in Lebanon. In an unprecedented show of political theatre in April, Hezbollah choreographed a symbolic show of force in the south through a warning to Israel, the U.N., and the Lebanese government itself. Israel, meanwhile, has taken pains to focus international and particularly U.S. attention on Hezbollah’s destabilizing influence, and the requirement for the group to disarm.

Highlighting continuing problems in the south is one element of a broader strategy energized by the war next door. As the endgame across the border in Syria unfolds, both Israel’s Prime Minister Benjamin Netanyahu and Hezbollah’s Hassan Nasrallah are calling attention to the south in order to improve their respective positions in Syria.

Their recent moves have emphasized the fact that, for all of its problems and mutual ill will, the regime established by U.N. Security Council Resolution 1701 accurately reflects the desire of all parties to keep the peace, however uneasy it might be. During its press tour of the Blue Line, Hezbollah highlighted what it described as the new defensive deployment of the I.D.F. along the border, not exactly a message calculated to paint Israel as the aggressor.

Hezbollah M.P. Ali Fayyad suggested in April that, like Israel, Hezbollah is ready for war, at least in this area of operations, but is more interested in deterrence than offense. “The resistance [Hezbollah] is in a defensive position and that it is seeking to consolidate… stability in the south based on the equation of deterrence with the Israeli enemy.”

As the surrounding region implodes, South Lebanon is an island of relative stability. Israel and Hezbollah share a hard-earned appreciation of the terrible costs of another war in this arena, and understand the uncertain prospects of a definitive victory.

The rules of the game in Lebanon are fairly well understood. The balance in the south remains fragile, but the standoff there is being leveraged by each to achieve advantage in the new arena of confrontation in Syria. The torturous path to a new post-war Syria creates for Israel and Hezbollah zero-sum opportunities for strategic gains or losses. South Lebanon is less of an arena of conflict than a stage on which the battle for Syria’s future is being waged.