How Afghanistan Pulled Back From the Brink 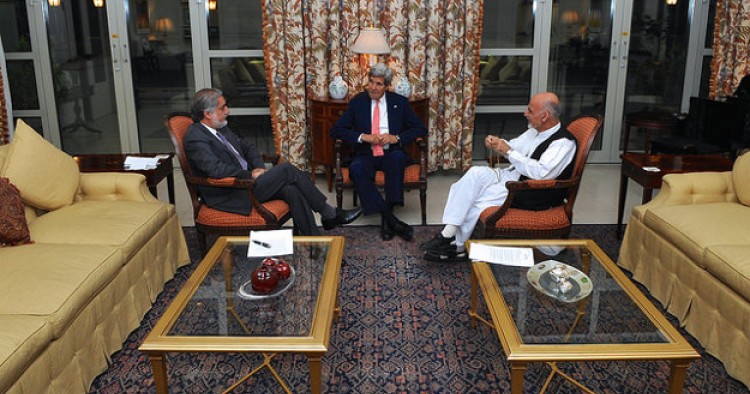 This article was first published in The Diplomat.

It comes with obvious relief that U.S. envoy Secretary Kerry has brokered a compromise to overcome Afghanistan’s current electoral standoff. The agreement calls for a full audit of the balloting of Afghanistan’s run-off presidential election under the eyes of international monitors. An impending national crisis has been averted as Abdullah Abdullah and Ashraf Ghani have agreed to respect the outcome of a re-examination of the votes. A willingness by the rivals to form a unity government represents significant concessions by both sides. Perhaps more significantly, they have apparently also approved the idea of transitioning Afghanistan from a presidential form of government to a modified parliamentary system. The proposed constitutional change would address what has been a core problem with Afghan electoral politics and governance—its winner-take-all features.

A decision of the 2004 Constitution’s framers and their foreign advisors to concentrate formal authority in the office of the president may have seemed a fitting arrangement for a fledgling state. But, as a result, Afghanistan has been left to cope with a system that has proved ill-suited to a country with weak institutions, an essentially decentralized polity, and a diverse society. In the absence of any serious institutional checks on the president, he has been able to govern arbitrarily and at times capriciously. The centralization of authority is also at odds with the limits of the state’s formal powers beyond Kabul. As president, Hamid Karzai sought to overcome these barriers mainly by resorting to corrupted patronage networks to exert his influence.

The compromises achieved by Secretary Kerry’s intervention acknowledge that Afghanistan would be better served by a governing structure that dilutes presidential authority and encourages greater political inclusiveness through the sharing of state and executive powers between a president and prime minister. This form of government, for which Dr. Abdullah has long been an advocate, would seem especially apt in the current context.

To begin with, it captures the particular strengths of both Dr. Abdullah and Dr. Ghani. The country would be poorer without the contribution of either. Abdullah’s considerable diplomatic experience and personal qualities make him well suited to hold the presidency. And Ghani, widely acknowledged for his intelligence and skills as an administrator, seem like ideal skill sets for the country’s first prime minister. Importantly, they have like visions for Afghanistan and not dissimilar policy agendas. They also share fears of state failure and a descent into civil war. The vicious conflict among mujahedeen factions vying for the presidency and control of Kabul between 1992 and 1996 remains a national nightmare.

The transition to a parliamentary system will require time to work out. An arrangement, presumably providing for a popularly elected president and a prime minister who is appointed by the president but acceptable to a parliamentary majority, will require careful constitutional drafting. Once written, perhaps over two or three years, a convened constitutional Loya Jirgah—the traditional means for ratifying changes to the country’s fundament laws—could adopt the amended document relatively quickly. For the system to be effectively implemented, however, the country’s electoral laws will also have to be rewritten to permit political parties—for the first time in Afghan history—to offer competing slates in national elections.

Until the time when the system is changed, the unity government contemplated by the agreement would be realized by having the president—determined by the electoral results after the audit—name his opponent to a newly created chief executive position. That office would presumably be accorded significant powers in the management of government affairs. In all likelihood, the cabinet ministries and governorships would be divided between the opposing camps.

But the goodwill shown in the agreement may be severely tested in the coming weeks, months, and beyond. Despite pledges to honor the result, the possibility remains that the defeated candidate may balk at accepting the verdict of an audit in which discredited electoral officials will be participants. Negotiating a unity government is likely to be difficult. Defining the chief executive’s responsibilities will be challenging particularly because, to be meaningful, the newly elected president will be required to shed some of the near dictatorial powers that have come with the office. Building a coalition government is always a delicate exercise, but it is bound to be especially hard to bring and hold together two sides that have been so bitterly opposed. Indeed, those politically influential people who had joined forces with Dr. Ghani or Dr. Abdullah and had expected to be awarded with the spoils of victory may work to upset implementation of the deal agreed to by the candidates. And finally, the incumbent president must follow through on overhauling the constitution, the details of which are almost certain to be contentious.

A great deal is at stake in keeping the agreements from coming undone. Unresolved national leadership could divide the country along ethnic lines if either Pashtuns or non-Pashtuns interpret the election results as shutting out their populations. If the agreement falls through, a protracted contest for national leadership could see the center’s powers gravitating to provincial and local strongmen and their militias. A very real danger would also exist that Afghan security forces could break up with their men and weapons dispersing among various militias. Civil unrest would almost certainly weaken the international community’s resolve to continue its military and economic assistance to Afghanistan. Political uncertainty has already accelerated the flight of Afghan financial and human capital. As occurred 20 years ago, an anarchic domestic scene could pave the way for the Taliban to rapidly extend their insurgency in the countryside and to the larger cities.

The deal struck between Abdullah and Ghani last week would not have occurred had they not realized they faced poor prospects in forming a stable, legitimate government without broadening its base. Even then, it took American leverage and proposals to bring the two sides together. The United States and other outside actors may also have a critical role to play in insuring that the terms agreed to will be honored. Plans to restructure the Afghan government are also likely to hinge on a foreign military presence at least through 2016, as well as international donors meeting their pledges to financially assist Afghanistan for almost another decade.