Intra-Shiite Tensions Heat Up Ahead of Iraqi Elections 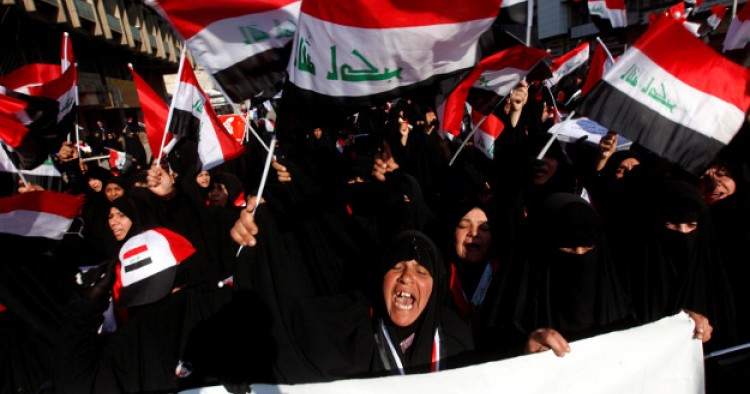 While Iraqi forces are fighting to retake the western half of Mosul from Islamic State fighters, internal divisions regarding the future of Iraq’s political process are escalating ahead of provincial elections scheduled for September, especially within the country’s largest Shiite political bloc, the Shiite National Alliance.

Vice President Nouri al-Maliki is hoping to win a political majority in parliament that will return him to the premiership. His rival, Shiite cleric Muqtada al-Sadr, vigorously opposes Maliki’s bid to return to power. Al-Sadr is also calling for political reforms to stem corruption and end the control of big parties over the country’s political system. On the other hand, Ammar al-Hakim, head of the Citizen Coalition, a large alliance of moderate political and tribal figures, is championing a plan known as the “historic settlement.” The proposal calls for ending all outstanding conflicts among the country’s political parties through a dialogue that would then lead to the formation of a national government after ISIS-occupied territories are liberated.

Prime Minister Haider al-Abadi, despite his continued attachment to the Maliki-led Dawa Party, is seen as an emerging independent political force in Shiite politics. Observers contend that Abadi is looking to convert the military victories against ISIS by the Iraqi military and the Popular Mobilizations Units (PMUs) into political capital in the upcoming elections. But the prime minister is facing a hostile parliament. Late last year, lawmakers voted out of office several key ministers on charges of corruption. Maliki is seen as the force behind those efforts. He wants to weaken Abadi’s government in order to pave the way for his return to power.

Maliki, whose eight years as prime minister earned him enemies across sectarian lines, is defying obstacles against his bid to return to power through what is perceived as an unspoken partnership with speaker of parliament Salim al-Jubouri, a Sunni, as well Maliki’s ties with the largely Shiite PMUs and Iran.

Jubouri, the speaker of parliament, appears to be a central component in Maliki’s vision of forming a cross-sectarian “political majority.” The two are rumored to have been behind the recent sacking of the Sadrist governor of Baghdad province, Ali al-Tamimi, as well as last year’s ousting of the former ministers of finance and defense, Hoshiar Zibari and Khalid al-Obaidi.

Maliki also hopes to capitalize on the popularity and military success of the PMUs against ISIS. He portrays himself as the founder of the force, which was drawn primarily from Shiite communities, after the collapse of the Iraqi army in 2014. Moreover, Hadi al-Amiri, one of the top commanders of the PMUs, is the head of the Badr Brigade, which is part of the Maliki-led State of Law coalition.

The vice president is also cultivating his ties with Tehran, which he visited in early January. During the visit, he commended Iran’s military support for Iraq at a time when Baghdad was facing arms shortages.

Sadr continues to utilize his vast popular support to exert pressure on the political factions inside Baghdad to enact reforms against corruption and to open the political process for smaller party lists. Recently, Sadr loyalists from various cities marched on the capital in support of their leader’s calls to amend the electoral law to include more constituencies. They also called for replacing the members of the Independent High Electoral Commission, which the powerful cleric deemed as being “controlled by the parties of corruption and injustice.” In response to the protests, the Dawa Party released a statement warning against “internal and external conspiracies” that aim to distract the Iraqi people from completing the fight against the Islamic State.

These developments come amid speculation that Sadr is attempting to create an electoral alliance for the upcoming provincial and legislative elections that would include Abadi, Vice President Ayad Allawi’s al-Wataniya list, and the Civil Democratic Alliance, all of whom have called for reforming the political system.

Hakim’s “historic settlement” proposal is perceived to be part of his Citizen Coalition’s electoral campaign. The proposal, to be negotiated and implemented in partnership with the United Nations, advocates for settling all outstanding issues between all parties on a no-winner-and-no-loser basis. Despite Hakim’s efforts to market the document around the country, it faces obstacles not only in Sunni and Kurdish circles, but also within the National Alliance, the country’s largest Shiite political bloc. Maliki emphasized that the settlement should not include “the Baath Party and those that facilitated the entrance of terrorists.” Sadr said the settlement should be “social and not political,” and Grand Ayatollah Ali al-Sistani, the most influential Shiite cleric in the country, refused to meet with Hakim earlier this year to discuss the proposal. Sadr, moreover, has called the proposal a “popular rejection” of the national alliance and its policies.

Sistani spokesman Hamid al-Khafaf said that the National Alliance wanted to engage the Shiite religious authorities on this proposal, but the grand ayatollah “did not see a benefit in that.” The spokesman added that Sistani has severed contacts with the political class due to its inaction in combating corruption and the lack of reforms. The Marja`iyya, the Shiite religious authority, has largely retreated from the political scene after its vociferous calls for reform did not materialize.

While past election cycles have been centered around efforts to mask differences among the Shiite ruling elite, divergent political aspirations, combined with differing visions for the country’s future, are intensifying as the provincial and legislative elections draw nearer. Both electoral contests may reflect a drastic change in Iraq’s political map, especially as internal divisions are also deepening within Sunni and Kurdish blocs. While cross-sectarian political partnerships sealed around the idea that the enemy of my enemy is my friend may be politically expedient, they don’t bridge the divisions that have afflicted the country since 2003. For this to happen, it is vital that the Iraqi political class undertake real cross-sectarian dialogue to resolve outstanding disputes, and ensure the stability and the economic viability of the country post-ISIS.