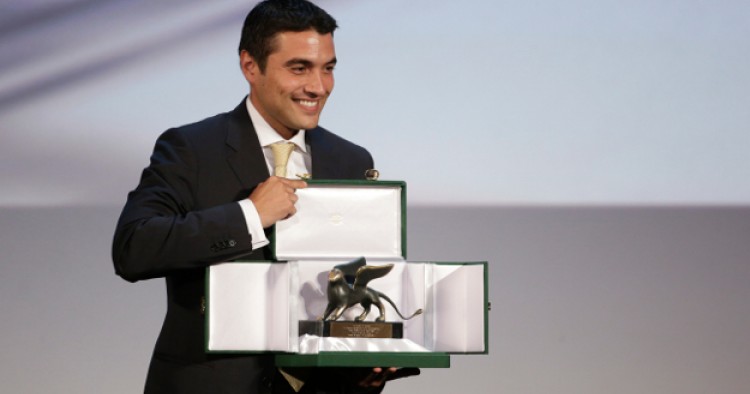 Update: Theeb has officially been nominated for best foreign film for the 88th Annual Academy Awards.

“It was incredible,” recounts the Amman-based filmmaker at the Palm Springs Film Festival where his film has played to packed theatres.

News that a Jordanian film about the Arab Revolt of 1916 was recognized in Hollywood was a rare light in the midst of regional turmoil. In a country with a very limited film industry, the Oscar shortlisting was a point of personal pride. “People came up to me in the streets to congratulate me the next day,” Abu Nowar recalls.

The story of a Bedouin boy’s journey into manhood, as he accompanies his older brother and an English officer on a treacherous journey into the desert, can be read as a reversal of the traditional Lawrence of Arabia narrative. It even recalls a cinematic version of Amin Malouf’s The Crusades through Arab Eyes. But Abu Nowar’s influences are wide ranging: scenes in the movie recall the tableaus of Caravaggio, the films of Kurosawa and even elements of the spaghetti Western.

Jordanian reaction to his BAFTA nomination, in the midst of the Palm Springs Film Festival has also been ebullient. “It’s like we won the World Cup,” Abu Nowar notes, as his phone lights up with messages from home.

And indeed there is much to celebrate. Theeb offers a number of proud ‘firsts.’ In addition to being the first feature film for 34-year-old Abu Nowar, who started working as a “tea boy” on London sets a decade ago, and whose previous credits include two shorts—Til Death and the Boxer—it’s also the first Arab film with dialogue completely in Bedouin Arabic.

Historically, the Bedouin have been marginalized in Jordan and elsewhere and their portrayal in mainstream Arab cinema and television has been not unlike that of old “cowboy and Indian films,” notes Abu Nowar.

But the young writer/director became enamored of the Bedouin culture and spent eight months living with them and “workshopping” the script. The entire cast is played by amateurs—local Bedouin from near Wadi Rum—many of whom have since gone on to professional acting careers.

While the Bedouin Abu Nowar consulted with decry their portrayal as “savages” in Arab soap operas as insulting, the cast of Theeb were happy with the film, says the director. But worlds collided at the screening in the desert he held for them, when one of the lead actors’ young nieces—who had never seen a film before—began to weep at the scene where he meets a violent end and proved inconsolable until the very much alive actor/uncle was brought forward.

Much culture shock ensued when the leads were flown to Venice for their debut at the film festival there last year—the first time for many on an airplane or out of their familiar territory.

Since then Abu Nowar has helped the neophyte actors gain work in international film productions and has helped establish a collective for Bedouin women to produce props for the film industry.

The casting process for the film, shot mainly in Wadi Rum and partly in a military zone with permission from both Jordanian and Israeli authorities, was as organic as the entire production.

“We had to rely on the Bedouin and their knowledge of the land,” recounts Abu Nowar, of a place where flash floods and a wide range of “creep-crawlies” were part of the environment.

The young Theeb, played by 12-year-old Jacir Eid, is the son of one of the Bedouin production managers. “At first I was concerned that the boy was too shy to play the role,” says Abu Nowar, “but when the cameras were on, he came alive.”

The main challenge in working with the young actor was convincing him to act out in a way that would have been incompatible with local Bedouin tradition. “Bedouin children are supposed to respect their elders,” explains Abu Nowar, while the role called for him to stand up and even confront his elders.

In the end, young Jacir excelled in the role that takes the audience on an epic journey through an action packed landscape of Ottoman mercenaries, Arab revolutionaries and former pilgrim guides turned raiders after the railway deprived them of their livelihood.

Many of the scenes from an era that still defines and complicates regional realities today have a political resonance with current events.

“The Arab Spring hadn’t happened yet when we were developing the film,” says Abu Nowar, “but it was in the zeitgeist and fed subconsciously into the story.”

But he finds comparisons to Lawrence of Arabia “annoying.”

“That’s an imperialist view—the idea that the only reason an Arab filmmaker is going to make a movie about the Arab revolt is because of Lawrence of Arabia.”

The revolt was “an important historic moment in itself,” he contends, and doesn’t require a Western “fantasy” to validate it.

“Lawrence wasn’t blowing up railways—that was done by the Royal Engineers. He was talking to tribal sheikhs,” maintains Abu Nowar, and not “in the field,” per se.

Abu Nowar’s already at work on a second feature, one he says is inspired by Kurosawa’s Seven Samurai.

The young filmmaker aspires to make an epic film in the style of Moustapha al-Akkad’s The Message, Line of the Desert. “But I want to rival and exceed that, I want to make the biggest Arab film ever made.”

But even more importantly, in a world where independent Arab cinema can often become ghettoized in the Western art house scene while being ignored at home, Abu Nowar aspires to "make films that the Arab world will love."

With the success of Theeb in both the festival circuit and with Middle Eastern audiences, the British/Jordanian filmmaker is well on his way to achieving that goal.