Killing in the Name of Air Time? Global Mass Media’s Representation of ISIS 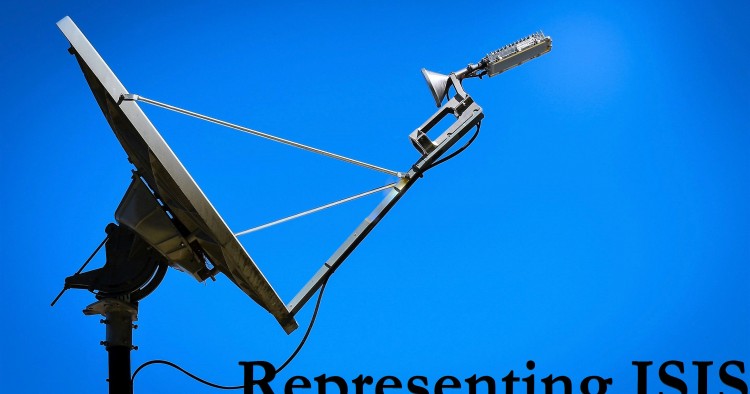 It doesn’t matter if the coverage that follows is negative say, criticizing the group’s brutality or questioning its religious legitimacy. For ISIS, provided it’s on the propagandists’ terms and conveys the group’s purported strength and omnipresence, any coverage is good coverage.[1]

… So ends a 2016 article in The Atlantic written by Charlie Winter, a Senior Researcher at the International Centre for the Study of Radicalization and Political Violence (ICSR). The author goes on to argue that ISIS is killing in the name of air time and is getting what it wants. Information from the Word Press page of Amaq News Agency (ANA), ISIS’s “official” news wire, is instantaneously transferred across millions of computer screens and mobile phones by news outlets and commentators around the world. Other observers have described the relationship between the mass media and terrorist outfits, particularly ISIS, as symbiotic;[2] that is, terrorists provide bloody emotional news, which the mass media uses to sell their products. Another, less convincing but prevalent criticism of the press, is that the attention they accord terrorist groups fuels further violence. Still others argue that globalization of the mass media, in a sense, contributes to the spread and enhancement of terrorist outfits’ ability to extend their reach, even to countries as far afield as Southeast Asia.

However, in neglecting to account for the views of jihadists themselves regarding global mass media depictions of their actions, these arguments help advance the notion that global media are essentially the terrorists’ tool. This essay will demonstrate that, on the contrary, global media’s skewed reporting of terrorism serves to manufacture popular revulsion of terrorist acts and opposition to jihadists’ agendas.

Before the 9/11 attacks, then-Taliban leader Mullah Omar warned Usama bin Ladin — but to no avail — to desist from making media appearances and antagonizing the Western powers.[3] After the 9/11 attacks, Bin Ladin advised Abu Mus’ab al-Zarqawi and others to avoid attacks on Muslim civilians and not to broadcast the execution of prisoners.[4] ‘Atiyya Abd al Rahman, another Al-Qaeda leader, reminded Zarqawi that “you need all these people if you need to erect the state of Islam.”[5] Bin Ladin’s deputy, Ayman al-Zawahiri also wrote to al-Zarqawi, the pioneer architect of the current nucleus of ISIS,

… the jihadist shouldn’t stir questions in the hearts and minds of people about the benefits of their actions … We are in a media battle in the race for the hearts and minds of our Muslim community, overlook the heresies of Sunni religious scholars, whose support al-Qaeda needed, and cooperate with Sunni community leaders. Stop broadcasting hostage beheadings. The beheading may thrill zealous young men, but the Muslim masses will never find them palatable.[6]

In a letter Attiya wrote to Zarqawi, the author recalled the fate of Algerian jihadists in the 1990s, who “destroyed themselves with their own hands,”[7] exercising and broadcasting “their lack of reason, delusion, their ignoring of people, their alienation of people through oppression, deviance, and severity, coupled with lack of kindness, sympathy, and friendliness.”[8]

The preceding interpretations of publicity by jihadists raises the possibility that the global mass media are not just doling out news reports.

The Global Media and the Manufacturing of Dissent

Two things reflect how the global mass media skews reports to manufacture popular dissent for the ISIS agenda. The first is the global mass media’s global-focusing strategy on the group’s dehumanizing activities, and not on their mission, goals, struggles, or the challenges that provided the generative force for their destructive operations in the Middle East and Europe. In news stories about ISIS attacks, there is a fixation on the group’s barbarism, including the latest body counts and human interest stories that concentrate attention on the emotional trauma of victims.[9]

Choices for publicity and suppression are comprehensible in choices of sources used. The global mass media broadcast official government sources condemning acts of terror while restraining the range of opinion allowed including expressions consenting terror groups. A massive and systematic dichotomization is also observable. The worthy and unworthy victims in the story, those murdered by the terrorist and the terrorist that was killed by the police, and the context differ in ways that serve political ends of either consent or dissent.

The second is the representation of jihadists as “terrorists” [10] and of their actions in the form of a global spectacle whereby the havoc wrought by the perpetrators is portrayed in a manner that evokes strong emotions and induces the audience to detest them. News coverage is suffused with fleeting images and reports of attacks on mosques, Islamic heritage sites, and bombings that claim the lives of innocent women and children in various parts of the world. The coverage also includes testimony by those who, initially attracted to jihadists, have become disillusioned.[11]

The global focusing and spectacle of ISIS attacks justifiably give vent and circulate worldwide discourses, views, and voices opposed to ISIS. Global mass media reports on ISIS attacks serve as “occasions that give vent to voices of dissent and criticism to galvanize forces for change”[12] against terrorism and refugee migration. Elites capitalize and piggy back on these disaster shocks in order to promote national and international solidarity against the employment of terrorism as a means of producing political change. It is instructive to recap just a few such instances here:

➢ “And in a firm determination, [we must] confront the world of hatred of the terrorists with our sense of humanity and cohesion. As we go on with our lives and work, we are telling terrorists: You are murderers full of hatred, but you do not determine how we live and how we want to live,” she said, saying the German society is and will stay “free, humane and open.” [13] — German Chancellor Angela Merkel, December 31, 2016.

➢ “We must come together; we must pull together, and united we will take on and defeat our enemies.” [14]  — British Prime Minister Theresa May, June 4, 2017.

➢ “You’ve seen what happened in Paris and Nice. All over Europe, it’s happening” President Trump told military commanders at Central Command. Later, and widely reported, Trump tweeted: “Just cannot believe a judge would put our country in such peril. If something happens to our country blame him and the court system. People are pouring in. Bad!”[15]

Through the dramatic and symbolic scenes of global focusing and spectacle, terrorist attacks collected from around the world helps to establish an anti-Islam status for the group. These scenes stir dissent and establish ISIS as a widely recognized inhumane global spectacle, bringing home the threat, and reality of global terrorism. Locals are especially displeased when holy sites are brought down by jihadists.[16] The audience is enraged and at the same time threatened not to join or use terrorism as means to seek political change. Stirred, the audience asks, ‘Do they have to kill or destroy Allah’s Holy sites to get what they want’?

Thus, although the global mass media reports on ISIS attacks may be helping the group sustain its relevance and preserve its ideational longevity, disseminate their message of intimidation and enhance the perception of ISIS as a threat, at the same time, information that could help earn it the status of a proto-state are skived off. As Chomsky puts it, “what is on the agenda in treating one case is off the agenda.”[17]

ISIS’s supposedly comprehensive and effective propaganda campaign conveys impressions of its invincibility and validation from god, and captures the imagination of radical fringes across Southeast Asia.[18]  In the light of the supposition, ISIS’ forceful communication strategy and the recently increasing number of both terror threats in Malaysia and successful attacks in Indonesia, ASEAN governments are justifiably concerned about how to respond to ISIS media-inspired radicalization and recruitment originating in or emanating from the Middle East. According to Singapore Prime Minister Lee Hsien Loong, Southeast Asia is now a “key recruitment area for ISIS.”[19] For flaks like Winter’s and others that describe the relationship between terrorism and mass media as symbiotic, the higher tendency in places like Southeast Asia is to attempt to cut down on the number of reports and air time devoted to terrorist attacks.

But, perpetual publicity of ISIS’ brutal and inhumane attacks on the global mass media constitute one of the group’s strategic communication flaws. While media critics may argue that international news reports on ISIS earn international mileage for the group, by sending out and publicizing harsh punishments and acts of terrorism, these reports erode terror groups’ public support, even among Muslims.

Southeast Asian governments should be more mindful of social platforms on the internet — the real tools of terrorists — than to global mass media — the presumed tools. For it is through social media that a terrorist group can shape its own story to manufacture consent, amplify its voice, and justify its actions. Indeed, ISIS has been winning the social media war through effective branding, information distribution, and agenda-setting, notwithstanding the shutting down by Twitter of 360,000 accounts of ISIS sympathizers.

Therefore, Southeast Asian governments would be well advised to allow mass media to continue to shape stories about terrorism and jihadist groups, which, in effect, function as counter-narratives to the messages propagated by the groups themselves through social media.

[11] See statement by a resident of Ja’ar — a small town in Yemen captured by Ansar al-Sharia (AAS) in 2011 — broadcast on Skynews and quoted in Robin Simcox, “Ansar al-Sharia and Governance in Southern Yemen,” Hudson Institute, December 27, 2012, accessed September 9, 2017, https://www.hudson.org/research/9779-ansar-al-sharia-and-governance-in-….