Kuwait, Oman, and the Qatar Crisis 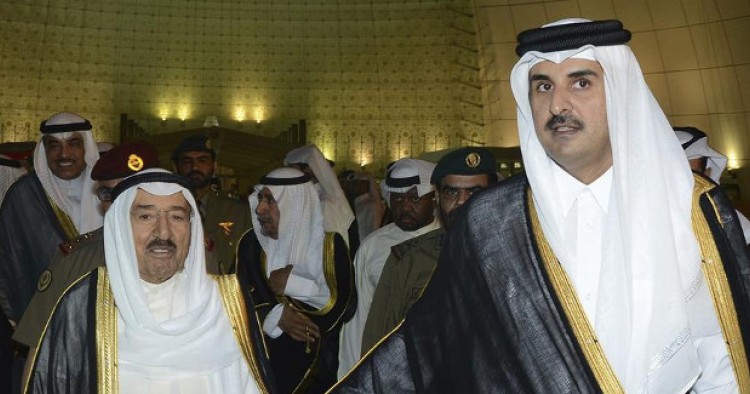 The ongoing Qatar crisis poses a major dilemma for Kuwait and Oman. Consistent with their “neutral” foreign policies, these two Arab Gulf states have maintained ties with Doha and seek to resolve the gravest internal Gulf Cooperation Council (G.C.C.) row since the organization’s establishment in 1981. Officials in Kuwait City and Muscat fear that failure to settle the Qatar crisis will break up the council, which would directly undermine vital Kuwaiti and Omani national interests given the potential for such a scenario to dramatically exacerbate regional geopolitical instability.

In an effort to work the rift “within the unified Gulf house,” Kuwait’s Emir Sheikh Sabah al-Ahmad al-Jaber al-Sabah engaged in shuttle diplomacy, travelling between the Qatari, Saudi and Emirati capitals shortly after the crisis erupted. On June 5, Oman’s foreign minister, Yousuf bin Alawi bin Abdullah, went to Doha on a private trip planned prior to the severance of several Arab states’ ties with Qatar. According to U.A.E.-based newspaper The National, the following day officials in Doha looked to their counterparts in Muscat for help in mediating the row, and Oman agreed.

Kuwait and Oman’s positions on the Qatar crisis came as no surprise given these two states’ record of serving as mediators in Yemen, between the Saudi-led military coalition members on one side and the Houthis on the other, as well as between Riyadh and Tehran. Another factor is that Kuwait and Oman have never had the same problems with Doha’s foreign policy that have irritated the U.A.E. and Saudi Arabia.

The prospect of the Qatar crisis escalating tensions between G.C.C. members and outsiders—chiefly Iran and Turkey—adds to an already volatile security environment in the Arabian/Persian Gulf. As neighbors of Iraq and Yemen respectively, Kuwait and Oman already feel the heat from unresolved crises on their doorsteps. To be sure, the longer this stalemate persists, the more difficult it will be for all sides to compromise.

In grander geopolitical terms, the ongoing row is a product of trends in the Middle East that unsettle the Kuwaitis and Omanis. The Saudis are attempting to pressure the smaller G.C.C. states into aligning closely with Riyadh by cutting off ties with Tehran. Yet throughout this year, Kuwaiti and Omani diplomats, along with their counterparts in Doha, have been seeking to cool tension between Saudi Arabia and Iran in an effort to bring the Gulf’s two main powers toward a peaceful détente. The Kuwaitis and Omanis see their future interests best served by hedging their bets on both the kingdom and the Islamic republic, while trying to bring about greater accommodation on the part of both countries. The agenda of pressuring smaller G.C.C. states into adopting Saudi Arabia’s stern anti-Iranian position does not sit comfortably with either Kuwait or Oman.

In Oman’s case, Saudi Arabia has signaled its displeasure with the sultanate’s growing relations with Iran across a host of sectors, including energy, trade, defense, and investment. Moreover, Riyadh and Abu Dhabi’s worries about growing Omani-Iranian relations may ultimately prevent the Saudis and Emiratis from seeing Muscat as genuinely “neutral” in the G.C.C.’s ongoing crisis. For this reason, Kuwait, which remains more closely aligned with Riyadh than Muscat, may have brighter chances at successfully bridging the gap between the different sides’ demands and conditions for a restoration of relations via roundtable talks.

Due to energy and geographical factors, Oman might feel greater pressure from an escalation in tension within the G.C.C. over the Qatar rift. With Saudi Arabia, the U.A.E., and Bahrain having closed their land and maritime borders with Qatar, Doha has come increasingly reliant on Iran and Oman to ensure the free flow of the emirate’s hydrocarbon exports through the Strait of Hormuz. Ultimately, if the Qataris can maintain their gas sales to Asia, the Arab governments’ action against Doha may fail to achieve their goals of sufficiently punishing the emirate.

The Saudis and Emiratis have previously accused Muscat of undermining the G.C.C.’s collective security by cooperating closely with Tehran, particularly in Yemen, which Oman’s foreign minister has denied. Unquestionably, if the Omanis continue to help spare Qatar from isolation by shipping from the Salalah port to Doha and permitting Qatari flagged vessels to enter the sultanate’s waters, such resentment of Muscat’s position will threaten to further divide the G.C.C.

As for Kuwait, modern history shapes its views of Gulf security crises. The emir, who served as foreign minister between 1963 and 2003, and then as prime minister until he became the sheikdom’s monarch in 2006, makes foreign policy decisions based on painful lessons that Kuwaitis have learned from the numerous Gulf wars, including the Iraqi invasion of Kuwait. The key lesson is that when countries target Kuwait and/or its neighbors, the state that initiates such action will always suffer unintended consequences, along with all in the region.

Today, Kuwait seeks to prevent an escalation in regional tension that may result in military action being taken against Qatar or a forced regime change in Doha. There is a particular concern regarding Turkey and Iran’s potential responses to any such moves against the emirate. A major risk for the Kuwaitis is that if this stalemate is prolonged, the monarchs of the involved G.C.C. states will become more convinced that their legitimacy is increasingly linked to their ability to stand strong amid this row. This would decrease the potential for necessary compromises in the future. Thus, the Kuwaitis understand that the time is now for a swift resolution to the Qatar crisis.

Although Kuwait is leading the mediation efforts, Oman is naturally supportive of such diplomacy on Kuwait’s part. These two Arab Gulf states share the same interests in terms of preventing the Qatar crisis from prolonging, and undermining the prospects for the involved actors resolving their dispute. In the event that such efforts prove futile, Kuwait and Oman both have much to lose.