A Look at Oman and South Korea’s Strategic Partnership 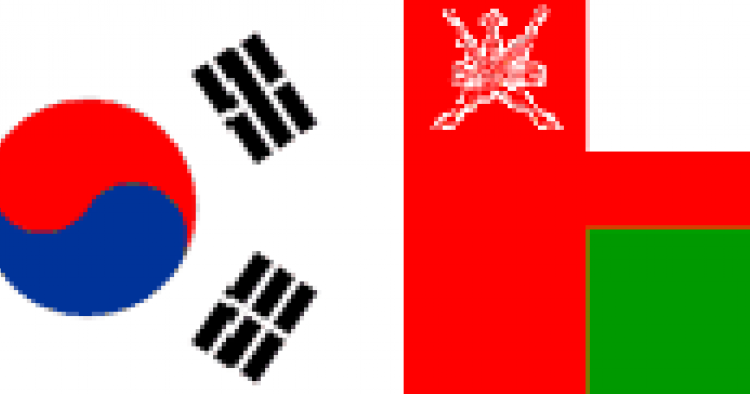 This essay is part of a MAP series that aims to shed light on Korea-Middle East relations — their historical and cultural underpinnings, as well as their energy-based and other economic aspects. In addition, the series aims to shed light on the geopolitical and other factors that have facilitated and constrained the development of these ties. See more ...

The Sultanate of Oman’s foreign policy, like that of the other Gulf Cooperation Council (G.C.C.) countries, has been closely oriented toward the United States and other Western powers throughout the post-colonial era. Yet Oman and the other G.C.C. states have diversified their strategic partnerships by deepening trade, investment, and security ties with East Asian nations.

One must analyze Omani-Korean relations within the historic context of the Maritime Silk Road, which was a conduit for trade and cultural exchange linking East Asia to the Arabian Peninsula, East Africa, and Europe as early as the seventh century. According to Hee Soo Lee, Professor of Cultural Anthropology at Hanyang University, “Long before the advent of Islam, Korea and the Middle East had already established trade relations by sea and overland routes such as the Silk Road.”[2]

From the Republic of Korea’s founding in 1948 through the 1960s, however, Seoul pursued a passive foreign policy toward the Middle East. Koreans focused on the Cold War politics that divided their peninsula and on their own economic development following the Korean War. Seoul had limited economic or political interests in the Middle East. South Korea’s international trade relations during the 1960s are telling. The nation’s total trade with nine Middle Eastern nations (Kuwait, Libya, Oman, Israel, Iran, Iraq, Qatar, Saudi Arabia, and the United Arab Emirates) totaled $125 million throughout the decade.[3] During the same period, South Korea’s trade with Japan and France reached $2.696 billion and $86 million, respectively.[4]

Yet during the 1960s South Korea underwent rapid economic development, which in turn became a catalyst for its deepening of ties with Middle Eastern states. As South Korea lacked the indigenous energy resources to power its economy and meet its skyrocketing domestic consumption demands, Seoul’s foreign policy became increasingly geared toward the concept of energy security. Consequently, from the 1970s on, South Korea grew increasingly reliant on the oil-rich Arab world.

During the “Middle East Boom” (1975-1983), South Korean construction firms, known for their experience and willingness to work for less money than their competitors, secured contracts for major projects in the Persian Gulf.[5] These included Samwhan Corporation’s Al Ula- Khaybar Highway Project and Hyundai Engineering & Construction’s building of the industrial harbor in Jubail, Saudi Arabia.[6]

Oman’s official relationship with South Korea grew essentially in tandem with Seoul’s ties with most of the other Gulf kingdoms. South Korea first established ties with Saudi Arabia in 1962, then with the five smaller Gulf Arab monarchies throughout the mid-1970s and early 1980s.[7] Despite sharing a history of ancient trade ties, by the time Oman and South Korea established official diplomatic relations in March 1974, there was hardly any commercial exchange between the two countries. From 1970 to 1974, bilateral trade amounted to only $90,000.[8] A decade later, from 1980 to 1984, Omani-Korean trade increased to $1.374 billion; by 1985 to 1989, it had reached $3.5 billion.[9] The growth of Omani-Korean economic ties throughout the oil-boom also grew in tandem with Muscat’s deepening partnerships with other East Asian nations achieving rapid economic growth, most importantly China. In 2014, East Asia was the destination of nearly three-quarters of Oman’s estimated 800,000 b/d of crude oil and condensate exports.[10]

To keep things in perspective, however, Oman has more modest oil and gas reserves than other G.C.C. states and, consequently, trades on a much smaller scale. In 2013, Saudi Arabia, Qatar, and the United Arab Emirates' bilateral trade with South Korea reached $46.5 billion, $26.72 billion and $22 billion, respectively.[11] In 2014, Kuwaiti-South Korea trade exceeded $18.9 billion.[12] Unlike the more oil-rich G.C.C. states, non-OPEC Oman is not a leading provider of oil for South Korea.

Nonetheless, Oman and South Korea maintain an important trade relationship. In October 2003, Muscat and Seoul signed a protection investment agreement.[13] Currently, there are over 100 South Korean firms investing across the Gulf nation in sectors such as energy, construction, and shipbuilding. Prominent South Korean firms in Oman include Daewoo, Dealim, Doosan, Hanjin, and Hyundai.[14] Some of these companies are involved in the expansion of the gas facility in Sohar.[15] When a consortium of five South Korean companies purchased 5 percent ownership of an Omani L.N.G. project worth $2 billion in February 1997, it marked the first time in which South Koreans had invested in the early stage of such a project.[16]

As South Korea is a global shipping power and Oman has busy deep water seaports, shipping has taken on an important role in bilateral relations. In 2008, Daewoo and Gilfar, a local construction firm, won a $442 million contract to build infrastructure at Oman’s dock in Duqm.[17] In recent years, the Oman Shipping Company has ordered medium-range tankers from Hyundai Heavy Industries and a Very Large Crude Carrier (VLCC) from Daewoo Shipbuilding & Marine Engineering Co.[18]

Recently, Oman has contributed to numerous international conferences in South Korea, including the United Nations Public Service Forum, the 12th Conference of Parties to the Convention on Biological Diversity and High Level Segment, and the International Telecommunication Union.[19] In August 2014, the two countries held the fourth session of the Oman-Korea Joint Committee, in which Muscat and Seoul top officials met to discuss deepening bilateral ties in economic, trade, and investment spheres.[20]

Tumbling oil prices are weakening Oman’s financial position and the sultanate’s oil reserves are expected to dry up in 15 to 20 years.[21] Reliant on the hydrocarbon sector for 84 percent of revenue and for roughly half of its gross domestic product, Oman is determined to raise revenues beyond oil and L.N.G.[22] Accordingly, officials in Muscat are seeking to train Oman’s youth for jobs in the science, technology, and engineering sectors.[23] The nation’s tourism, fishing, agricultural, and logistics sectors are also promising.

Muscat’s goal to integrate more competitively into the global economy creates new opportunities for South Korean firms to invest in a stable corner of the MENA region. This geospatial trend is indicative of a continuation in the historical economic relationship between the Omanis and East Asians, rooted in the ancient Maritime Silk Road.

The Sultanate of Oman is situated in close proximity to some of the world’s most complicated and sensitive geopolitical fault lines. Oman and Iran lie astride the Strait of Hormuz, the artery linking the Persian Gulf to the Gulf of Oman and, by extension, to the Arabian Sea and Indian Ocean. 35 to 40 percent of the world’s seaborne oil transits this narrow channel.[24] Under Sultan Qaboos bin Said’s leadership, Oman has pursued a neutral, pragmatic, and moderate foreign policy. Since the Iranian Revolution, Oman has been a strategic military partner of the United States, hosting three United States Air Force sites, as well as U.K. military assets.[25] Yet Muscat has also built up military relations with China, India, Pakistan, the G.C.C., and Iran, establishing deep ties with nearly all of the relevant states in the region.

For years the Omanis have sought to defuse tension between the United States and Iran. In 2012, Muscat hosted secret talks between officials from Washington and Tehran, which marked the beginning of the negotiation process that culminated in the Joint Comprehensive Plan of Action (JCPOA) of July 2015.[26] Oman has also sought to broker cease-fires in the ongoing conflicts in Syria and Yemen.[27]

Officials in Seoul follow very closely—and with great uneasiness—the current geopolitical turmoil in the Middle East. This is hardly surprising given South Korea’s extensive economic interests in the region, particularly in the Gulf. The Iran-Iraq war (1980-1988) and Saddam Hussein’s invasion of Kuwait in 1990 caused Seoul’s commercial ties with Iran and the Gulf Arab nations to suffer. To protect its interests, Seoul has stepped up its military involvement in the area, participating in U.S.-led antipiracy operations in the Arabian Sea, the Gulf of Aden, and in waters off the Somali coast.[28] South Korea will also likely find compelling strategic reasons to deepen its ties with Oman, given the latter’s flexible and influential role in the region’s volatile geopolitics.

In an effort to decrease the South Korea’s reliance on the Arab world’s hydrocarbon resources, the country has made large investments in its own nuclear industry by exploring wind, tidal, and solar sources of energy.[29] Nonetheless, South Korea remains reliant on energy imports; geopolitical and security crises in the hydrocarbon-rich Persian Gulf and Indian Ocean are issues which Seoul cannot afford to ignore. At this sensitive juncture, during which sectarian temperatures in the Persian Gulf are reaching their highest levels since the Iran-Iraq war, and Saudi Arabia and Iran’s entrenched rivalry is manifesting itself in the escalation of crises in Iraq, Syria, and Yemen, South Korea must continue navigating around the Middle East’s geopolitical flashpoints.

Last year, as officials in Seoul anticipated the signing of the JCPOA, South Korea doubled its imports of Iranian crude.[30] Unquestionably, Seoul must chart a shrewd course of action whereby it can maintain its growing economic relations with the G.C.C. nations while taking advantage of Iran’s re-entry into global markets. As Saudi Arabia’s leadership seeks to unite Sunni-ruled African and Arab states behind Riyadh to create a front against Iran and its perceived Shi’i influence, South Korea is likely to continue finding the Middle East a difficult region to avoid political risks in pursuit of its national energy interests.

Regardless of the future of Seoul-Tehran relations, South Korea’s energy landscape will likely depend on deep economic bonds with the G.C.C. for the foreseeable future. As the world’s sixth largest petroleum importer, South Korea relies on the G.C.C. for 71 percent of its oil consumption.[31] Most important to Oman is the L.N.G. trade. In 2014, South Korea, the world’s second largest L.N.G. importer (behind Japan), relied on Oman and Qatar for 45 percent of its L.N.G. consumption.[32]

At the same time, Oman’s stability, location, and role safeguarding the Strait of Hormuz will allow the Arabian Sea nation to continue serving as an important strategic partner and valuable trading and logistics hub for non-Middle Eastern nations trading with the MENA region. As Oman continues its push to achieve greater economic diversification, South Korean investment in sectors such as renewable energy, technology, health, education, and tourism could play a major role in the sultanate’s transition away from hydrocarbon resources.

Although more than half a world apart, Oman and South Korea share much in common. Both are U.S. military allies with histories of swift modernization, economic development, and industrialization. Oman offers South Korea the sultanate’s natural resource wealth and strategically prized location along the Persian Gulf, Gulf of Oman, Arabian Sea, and the Indian Ocean. In turn, South Korea, as the world’s 14th largest economy, provides Oman with access to foreign investment and steady demand for hydrocarbon resources. Based on decades of maintaining cooperative relations shaped by economic necessity and pragmatism, there is ample reason to expect the Omani-Korean partnership to reach new heights in the future.