Malaysia: A Base for the Growing Asia-Middle East Market?

The Malaysia-Gulf Cooperation Council (GCC) framework agreement signed in January 2011[1] — a pact underpinned by common cultural and historical ties and designed to spur the development of trade and investment — initially failed to enhance bilateral economic cooperation. Instead, Malaysia-GCC cooperation grew at a disappointingly slow pace, much to the frustration of Malaysian officials. However, with the shift in the direction of GCC trade from the West to Asia and the emphasis on the “Islamic connection” by Malaysia and many of its Middle Eastern counterparts, Malaysia-GCC economic cooperation[2] appears to be gaining momentum. Malaysia’s strategic location at the center of Southeast Asia and the need for as well as the apparent determination of Malaysia and the GCC countries to diversify their export markets could provide the impetus for this partnership to flourish.[3]

Malaysia is becoming an important destination for investments from Middle Eastern countries as the latter redirect their funds away from the West to Asia. For the period 1990-2010, a total of 31 projects worth approximately RM4.7 billion from the GCC were approved by the Malaysian government. Although only a modest number of projects have thus far been approved, the investment per project has been considerably high. Prior to 2005, Saudi Arabia was the only investor from the Gulf. Since then, the United Arab Emirates (UAE) has emerged as the top investor, commanding a share of 78% of total GCC projects approved in Malaysia.[4] To date, Saudi Arabia and the United Arab Emirates (UAE) are the leading Gulf investors in Malaysia. (See Table 1) Most of the investments from the UAE flowed into machinery equipment, followed by petroleum and chemical industries, which are considered promising areas of additional future investment for the Gulf countries in Malaysia. Saudi and Emirates’ investments have been drawn mainly to the Iskandar Johor Economic Development Area (IJEDA) in Southern Peninsular Malaysia. Indeed, the IJEDA, given its proximity to Singapore, is becoming a focal point for investments from the GCC. In fact, Qatar, too, is considering building petrochemical-related facilities in this area.

Aside from merchandise trade, Middle Eastern investors are now more inclined to tap into Malaysia’s healthcare industry and other services sectors, with a focus on real estate (shopping malls and hotels) and financial services. Taking a stake in the development of the Malaysian services industry is a positive shift on the part of the Middle East in moving beyond mere suppliers of energy. Recent developments include the signing of the Qatar's sovereign wealth fund agreement with a Malaysian partner in 2012 to build the Harrods brand luxury hotel in Kuala Lumpur. As for financial services, the common Shari’ah law between the Middle East and Malaysia facilitates bilateral business engagements. Generous tax incentives to encourage commercial banks operating in Malaysia to establish Islamic banking subsidiaries and foreign companies, coupled with the fact that Malaysia sits on the cutting edge of developments in Islamic finance, have been drawing in a number of GCC banks to establish operations in Malaysia. The Kuwait Finance House, Dubai International, and Mudabala of Abu Dhabi are all inaugural investors in the IJEDA.

Conversely, the GCC economies are attractive potential targets for Malaysian investment. To be sure, the GCC states have an abundance of capital and ultimately do not depend on foreign direct investment (FDI) to boost trade. Rather, they seek FDI selectively, particularly inward investment which is accompanied by technology transfer given their limited research and development (R&D) capabilities.[5] For example, the Abu Dhabi-based Higher Corporation for Specialized Economic Zones in the UAE has announced plans to partner with the Malaysian Business Council and the Malaysian International Chamber of Commerce and Industry (MICCI) in an effort to attract companies from Southeast Asia to take advantage of downstream oil and gas investment opportunities.[6]

Malaysia-GCC trade seems to be of a quite small order of magnitude. (See Figure 1) Total trade between Malaysia and the GCC rose from USD627 million in 1990 to USD10.4 billion in 2010. Though the Gulf region only constitutes less than 3% of Malaysia’s trade with the rest of the world, trade between Malaysia and the GCC countries nonetheless grew at a healthy annual average rate of 18%, with surpluses continuing to run in Malaysia’s favor. (See Figure 1) 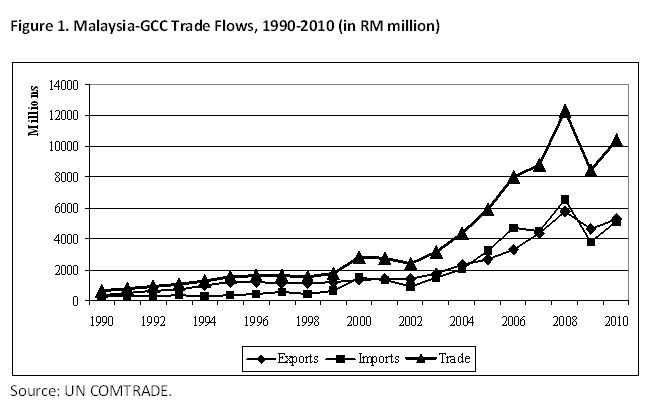 Industrial products dominate trade flows between Malaysia and the GCC, with high degrees of trade concentration with specific economies. The UAE and Saudi Arabia are Malaysia’s leading GCC trade partners. (See Table 1) Malaysia’s exports to the GCC is highly concentrated in the UAE, owing to the latter’s cost-competitive location for offshoring the manufacture of advanced technological products to serve both regional and international markets.[7]

Equally, Malaysia is an important source of manufactured goods that are not produced within the GCC or in neighboring economies. Further, the lack of a production base in capital and equipment goods in the GCC countries provide avenues for the expansion of Malaysia’s trade in manufactures. Comparative advantage based on differences in factor endowments therefore most likely explains trade behavior between the GCC and Malaysia. For example, UAE’s major imports from Malaysia consists of electrical and electronic products, followed by jewelry, palm oil and wood products,[8] while her corresponding exports comprise crude petroleum, metals, and refined petroleum. Clearly, Malaysia-GCC trade is one of inter-industry trade, with low levels of trade overlap or exchanges. (See Table 2)

Another interesting shift is that Arab countries are now looking to Malaysia to enhance halal standards and promote related products. Until recently, meat and halal products have been largely imported by the GCC from Australia, New Zealand, Ireland, Brazil, Canada, and the United States (US). Although Malaysia had taken the lead in developing and modernizing this sector, she had essentially lost out to these competitors in the past. With the Gulf changing its focus to Asia, the food and chemicals industries in Malaysia that are largely bound by halal laws command an edge over other regional manufacturers. In fact, to boost the halal business industries, the Penang (Northern Peninsular Malaysia) International Halal Industry Park for instance includes Saudi Arabia’s Alrajhi Bank as a major investor with another such project to be launched is the Pengkalan Chepa Hala Park in Kota Baru (East Coast of Peninsular Malaysia).

Based on recent developments, Malaysia seems to project enormous potential in attracting Muslim capital from the Middle East, particularly from the GCC countries. Malaysia is now emerging as a launch pad for hotels and a potential springboard for investments into the financial sector. The Gulf region, in turn, provides opportunities for both product and market diversification for Malaysia.

The present low investment and trade levels between the GCC emerging market and Malaysia represent unexplored bilateral opportunities. Common economic goals for economic diversification and emphasis on intensifying links with Islamic countries have provided a distinct advantage for Malaysia to be positioned as a strategic base for Middle East Asia cooperation in investment and trade. Another bonding factor is the strong investment and trade links established between Malaysia and the UAE, the Gulf state which has played a “core” role as a strong re-exporting business hub in the Middle East. Nevertheless, it remains to be seen whether Malaysia will be able to produce the synergies with GCC countries — in the face of strong competition from Asian neighbors[9] — that will enable it to become the gateway for Middle East-Asia business partnerships.

[2] The Gulf Cooperation Council (GCC), established on May 25, 1981, includes Bahrain, Kuwait, Qatar, Oman, Saudi Arabia, and the United Arab Emirates (UAE). The GGC economies share a common production structure based heavily on a state-owned hydrocarbon sector and a nonoil sector dependent on imports. Beginning 2008, the GCC operated a common market, which aims to have a unified tariff structure and to remove intra-bloc trade barriers. See, for example, World Bank, Economic Integration in the GCC (Washington, DC: World Bank, 2010).

[4] Saudi Arabia and the UAE are also the major FDI destinations for Malaysia. There is, however, no consistent time-series data available on Malaysia’s FDI outflow to the GCC.

[8] Exports of wood products from Malaysia to the Middle East are expected to gain momentum with the onset of new housing projects in the latter. More recently, demand from the Middle East for Malaysian-made garments has seen a substantial rise as a result of the rising affluence and household income of these emerging economies. See Malaysia’s Ministry of Finance (MOF), Economic Report 2011/2012 (Kuala Lumpur: Percetakan Nasional Malaysia Berhad, 2011).