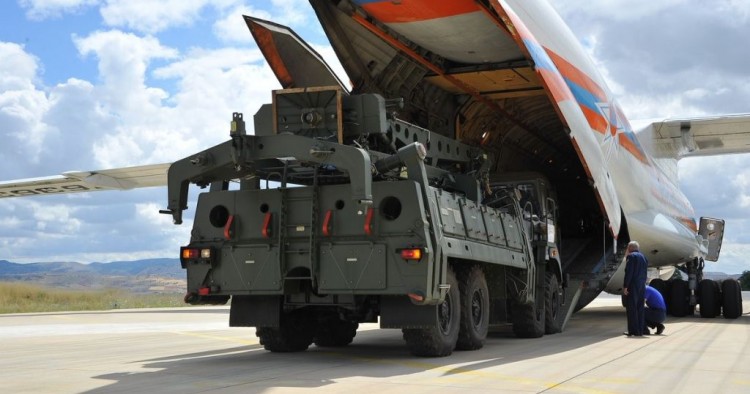 Turkey began taking delivery of the first Russian S-400s last week despite repeated warnings from the U.S., and the new missile defense system has received a warm welcome. In the Turkish city of Bursa, a man baked a giant spinach pastry and sent it to Russian President Vladimir Putin to thank him. Also in Bursa, another man drove through the city streets with a replica of the missiles made from water pipes mounted on top of his car. Columnists, analysts, and TV commentators — pro- and anti-Erdogan alike — hailed the delivery of the missile system as the “country’s liberation from the West.” The U.S. response followed several days later, when it officially expelled Turkey from the F-35 stealth fighter jet program in retaliation. Turkey, one of the largest F-35 export customers, had planned to buy 100 jets. It was also involved in the F-35’s production as one of eight partner countries that joined the program in 2002, manufacturing some 900 parts for the plane. The U.S. announcement has not changed the jubilant mood in Ankara, although it has underscored the need for Turkey to find — or develop — an alternative.

Turkey’s quest to build its own aircraft began as early as the 1920s. The U.S. supported the idea of an independent Turkish air force after the onset of the Cold War and helped Turkey to that end, providing substantial U.S. military assistance under the Truman doctrine. When U.S.-Turkey relations soured in the 1960s and the 1970s, mainly over the issue of Cyprus, calls for building a Turkish combat aircraft became even louder. Those in government and defense circles argued that Turkey could not afford to depend entirely on the U.S. for its security needs, and the American decision to militarily sanction Turkey after its intervention in Cyprus in 1974 proved their point.

The desire to avoid military dependency was one of the main drivers of Turkey’s decision to take part in the F-35 program. By participating, the Turks hoped to gain enough know-how about producing a new generation of fighter jets to eventually build their own. To that end, they launched the TF-X project to design, develop, and manufacture an indigenous combat aircraft in 2010. Many in Ankara do not see the U.S. decision to expel Turkey from the F-35 program as an impediment to achieving that goal. On the contrary, they see it as further proof that Turkey has to diversify its arms suppliers and as an opportunity for the local defense industry to stand on its own feet.

But the way ahead for Turkey’s defense industry is unlikely to be as smooth as many in Ankara wish. Turkey’s purchase of the S-400 system, and the ensuing U.S. decision to expel it from the F-35 program, is one of the biggest ruptures in U.S.-Turkish defense ties in decades. Worse yet, both parties stand to lose as a result. Finding U.S. suppliers to make the components previously produced by Turkish manufacturers will cost the U.S. Defense Department an estimated $500-600 million. It may also limit Turkey’s cooperation in future NATO missions.

Turkey, for its part, will not be able to buy any F-35s, and will lose out on an anticipated $9 billion in contract work from the deal. It will also lose the associated technology transfer, which could set back its efforts to build its own fighter jet. Ankara wants to replace its F-16s, currently manufactured under license from Lockheed Martin, with an indigenous fighter by 2023. It recently unveiled its TF-X fighter at the Paris Air Show, but it still needs to work with the West to develop key subsystems. Additional U.S. sanctions that may be imposed under the 2017 Countering America’s Adversaries Through Sanctions Act (CAATSA) could threaten future upgrades to Turkey’s existing fleet of F-16s as well.

In short, with the F-35 out of the picture, Turkey will need another fighter jet — and Russia is more than willing to extend a helping hand. Moscow offered Ankara its Su-35 Flanker, as well as its most advanced Su-57. Military experts, however, are skeptical. The Turkish Air Force has operated combat aircraft designed and built for the U.S. Air Force since 1952. Turkish pilots and ground crews have been trained to work with Western aircraft for generations. Switching to Russian aircraft is not an easy task. Besides, the Russian Su-57 is no match for the F-35, designed with state-of-the-art sensors and cutting-edge stealth technology.

But President Recep Tayyip Erdogan — who surprised many when he declared his intention to purchase the S-400 system — may opt for the Russian option, despite its shortcomings. This will be yet another step to assert Turkey’s “independence” from the West, at a time when Eurasianism, an anti-American, Russophile movement that failed to resonate widely among the Turkish public until recently, has become increasingly popular. In a recent survey by an Istanbul university, 44% of respondents supported Turkey’s decision to purchase the S-400, while only 24% said otherwise. However, the same survey also found that the overwhelming majority of respondents support Turkey’s NATO membership. This suggests that while Turks might appreciate Putin enough to bake spinach pastries for him, leaving NATO might not be on the horizon just yet. But things could change fast, and the next steps taken by Washington and Ankara could determine whether there will be a tectonic shift in Turkey’s geopolitical orientation.