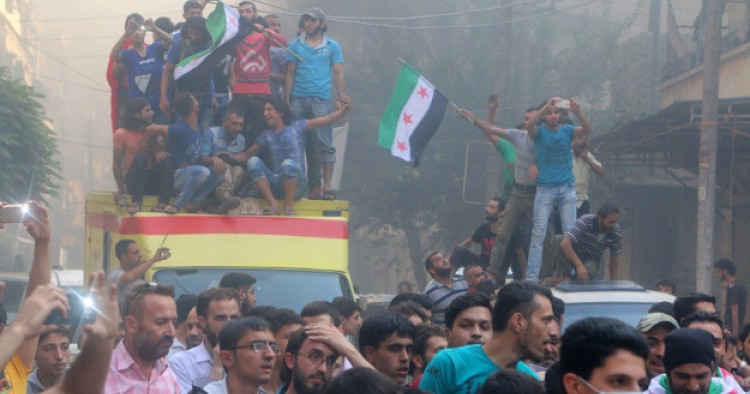 In this week's Monday Briefing, MEI experts Charles Lister, Gonul Tol, and Paul Salem provide analysis on recent and upcoming events including the battle for Aleppo, Turkey's extradition appeal for Fatullah Gulen, and IMF talks in Cairo this week on Egypt's request for more than $12 billion in loans.

The siege of Aleppo looks set to be a major pivot point in the Syrian crisis. While Russia’s intervention in Syria in September 2015 transformed the balance of power on the ground, it was a later Iranian push from early-2016 that facilitated the siege of Aleppo itself. As Iranian-backed pro-regime forces steadily closed in on key strangle points like the Castello Road, Russia saw itself gradually sucked into a battle in which its airpower is now a crucially important factor. Now that the siege is in place, no party to the pro-regime alliance can afford to let it slip.

Contrary to Syrian state media reporting, Aleppo’s opposition is highly unlikely to surrender or submit to amnesty. Similarly, Russia’s creation of four “humanitarian corridors” leading directly into regime-held territory will induce only fear within the city’s civilian residents, who watched similar schemes in Homs in 2014 result in mass arrest and disappearances.

The city’s Free Syrian Army-dominated Fatah Halab coalition has been planning for the siege since late-2015, with its senior leaders saying they now intend to adopt guerrilla warfare tactics to retaliate against regime targets. More significant, however, has been the reaction of armed groups outside the city. Commanders from Latakia, Hama, Idlib and Aleppo have coalesced to launch what may be the most substantial opposition operation of the conflict. Personal, political and ideological differences have been shelved in order to prioritize a counter-offensive that within 36-hours looks to have the potential to at least temporarily break the siege of the city. Unsurprisingly, the newly re-branded Jabhat Fatah al-Sham, formerly Jabhat al-Nusra, has assumed a lead role.

Whatever the ultimate outcome, further military escalation and civilian suffering in Aleppo promises only to make political efforts to solve Syria’s crisis even harder.

The Turkish government is hoping the United States will quickly extradite Fethullah Gulen, who has been living in self-exile in rural Pennsylvania sine 1999, for plotting the failed coup against President Recep Tayyip Erdogan. But it looks like the process might be thornier than Turkey had hoped.

Since the failed coup, Turkey has renewed its extradition demand, but it is unclear whether Ankara can produce the hard evidence required by the United States. Once the U.S. Departments of State and Justice determine that evidence of the offense is prosecutable in the United States, it then moves to the U.S. District Court for the Middle District of Pennsylvania. If the court turns down the extradition request, Gulen would be set free and allowed to remain in the United States. If the judge approves it, Gulen's attorney could attempt to block his immediate deportation by appealing the decision in the U.S. federal court system. The extradition would ultimately be decided by the secretary of state.

This process could take months, if not years, which will strain already tense relations between Washington and Ankara.

The I.M.F. is in talks with the Egyptian government in Cairo this week. Egypt is seeking $12 billion in I.M.F. loans over the next three years, as well as $7 billion from other sources, such as the World Bank and the African Development Bank, and support for international sovereign bond issuance.

The I.M.F. loans are necessary to ease the government’s budget deficit, which has hovered around 12 percent of G.D.P., and to commit the government to difficult but necessary reforms: the reform package is likely to include fuel subsidy cuts, introduction of a value added tax, and privatization of state-owned companies.

President Abdel Fattah el-Sisi said in a speech today that the next few days will bear “good news for the Egyptian people,” but that the government would need the public’s support in undertaking “harsh economic measures” to turn Egypt’s faltering economy around. The reforms are necessary to put the country’s public finances on a healthy footing and boost confidence and investment in the Egyptian economy, but they will trigger public pushback. Egyptian governments have had difficulty implementing such reforms in the past.

It is essential that the Egyptian government and international donors shield, or compensate, Egypt’s poor—which constitute 26 percent of the population—from the impacts of these changes. The more challenging political pushback, however, might come from Egypt’s large and precarious middle class, both in the public and private sectors, as well as entrenched elites that benefit from controlling state assets.

With a population that is slated to reach 140 million by 2030, youth unemployment above 30 percent, and dangerously sluggish economic growth, this might be Egypt’s last chance to right the economic ship and help the country realize the higher growth rates that its growing population desperately needs.