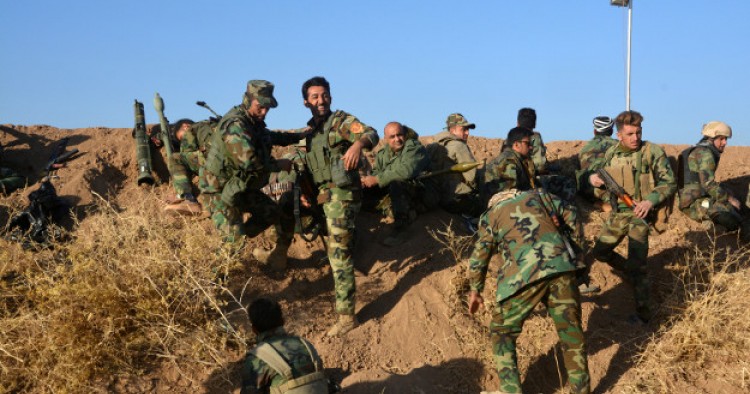 In this week's Monday Briefing, MEI experts Randa Slim, Gonul Tol, Charles Lister, and Paul Salem provide analysis on recent and upcoming events including potential fallout from the battle for Mosul, how the row between Turkey and Iraq will complicate the operations in Mosul, the implications of ISIS' loss of Dabiq, and recent military cooperation between Egypt and Russia.

The battle for Mosul, the last ISIS stronghold in Iraq, has begun. This battle is expected to last months. How the battle is executed will have long-lasting consequences for the future of Iraq. The preparations for Mosul augured an unprecedented level of cooperation between the Iraqi military and Kurdish peshmerga forces. Part of the agreement specified that neither the peshmerga nor the Popular Mobilization Units will enter the city of Mosul once ISIS is defeated. The immediate humanitarian challenges facing Iraq and the international community are huge. Iraqi authorities estimate 1 million civilians are still strapped in the city, many held as human shields by ISIS. It is estimated that up to 200,000 civilians might flee the city in the first weeks of the fighting. While preparations for dealing with this large number of refugees were taking place prior to the start of the battle, they are nowhere near enough. An immediate surge in humanitarian aid and funding is urgent. While Iraqi political elites will be consumed by developments on the battlefield, it is critical that they start preparing for the post-Mosul battle phase. Once ISIS is defeated in Mosul, the Iraqis will once again be on their own as the attention of the international community shifts elsewhere.

The old challenges which have faced Iraq and were pushed to the back burner by the primacy of the ISIS threat, will once again become priorities: fixing the relationship between Baghdad and Erbil, as well as between the Arab Shiite and Sunni communities; filling the leadership vacuum in Arab Sunni communities; and, finally, how to deal with thousands of armed Shiite volunteers who heeded the call of Ayatollah Ali al-Sistani in 2014 and volunteered for the fight against ISIS.

The Iraqi government’s operation to recapture Mosul from ISIS has ignited a conflict with Turkish President Recep Tayyip Erdogan. The Turkish government has insisted on having a role to play in the offensive, but Iraqi Prime Minister Haider al-Abadi vowed never to allow Turkish forces to take part and asked Ankara to withdraw its forces stationed at Bashiqa.

Ankara has three main interests here. First, Mosul holds historical significance for Turkey. The loss of the town to Britain in the aftermath of the Treaty of Lausanne is considered one of its earliest foreign policy blunders. By promoting Turkey’s right and duty to have a say in Mosul’s future, Erdogan is seeking to appeal to nationalist sentiment at home.

Second, Turkey believes it’s vital to maintain the Sunni dominance in Mosul in the operation’s aftermath. It fears that using Shiite militias—as have been relied upon in the past—to recapture the town could stoke sectarian unrest and trigger an exodus of refugees.
And third, Ankara wants to prevent the P.K.K. from taking advantage of the operation to expand its influence in the region. To this end, Turkey trained 3,000 Sunni Muslim and allied Kurdish peshmerga units at the Bashiqa camp near Mosul, and has succeeded in securing a role for around half of them to take part in the operation. Ankara wants them to remain in the city as a police force, over Baghdad’s objections. If the row continues, Turkey’s presence in northern Iraq is likely to complicate the Mosul operation.

Turkish-backed Syrian opposition fighters captured the prophesied town of Dabiq in northern Aleppo from ISIS on Sunday. ISIS’s quick collapse underlines the extent to which the jihadi group is struggling to sustain its peripheral territorial holdings. With its sources of finance under unprecedented pressure, internal morale at an all-time low and battle frontlines elsewhere in Syria and Iraq in stalemate, ISIS looks weaker than at any time since 2010.

Given the high symbolism that ISIS had attached to Dabiq – in its prophesied role in hosting a battle that would precede the end of the world – a more confident and capable force would have likely thrown more resources into the town’s defense. While Dabiq’s fall has revealed no clear sign of an impending apocalypse, it came as ISIS faced an imminent assault on its Iraqi capital Mosul and as Kurdish-Arab forces prepared to attack the de facto capital of ISIS’ ‘Caliphate,’ in Raqqa.

ISIS looks certain to struggle in defending both its ‘capitals.’ However, U.S.-led coalition forces face the more uncertain task of durably holding urban terrain captured from ISIS in a way that addresses the sectarian and ethnic tensions that preceded their fall to the jihadis. Neither strategies for Mosul or Raqqa look likely to get that challenge off to a promising start, but time will tell.

In the meantime, opposition forces in northern Aleppo look set to march southwards towards ISIS in al-Bab, after which they could perhaps more significantly re-open a front against the Assad regime’s siege of Aleppo city from the northeast. That could be a potentially transformative development in Syria’s broader conflict.

Egypt is hosting over 300 Russian servicemen this week to hold joint desert maneuvers, dubbed “Defenders of Friendship 2016.” This comes in the wake of a spat with Saudi Arabia that led to the suspension of oil deliveries, intensifying socio-economic unrest, and trepidation over remaining steps the government has to take before the I.M.F. releases the first tranche of its assistance package.
The maneuvers with Russia come after joint naval maneuvers in June, Egyptian purchases of Russian KA-52 military helicopters, and discussions to renovate military production factories in Egypt. Russian officials have even talked of re-opening the Russian air base at Sidi Barrani near the Libyan border—a possibility that the Egyptian government flatly denies. Egypt seeks to diversify its strategic relationships, but is also in advanced discussions with Moscow to resume critical tourist flights.

The spat with Saudi Arabia came after Egypt voted in support of a Russian resolution on Syria at the U.N. Security Council and also received a high-level Syrian government delegation in Cairo. It is not known whether the suspension of oil shipments from Saudi Aramco to Egypt this month is a one-time measure, or whether the suspension will be extended. Cairo and Riyadh do not see eye-to-eye on a number of regional issues, including Syria and Yemen, but they also both need each other. The row comes at a costly time for Egypt, but is unlikely to develop into a full rift.
I.M.F. head Christine Lagarde has said that Egypt still needs to float the Egyptian pound and fully lift fuel subsidies before the I.M.F. can release the first tranche. With growing desperation and unrest on the Egyptian street, there is serious concern that these measures could push tensions over the edge.