Mosul During the Caliphate 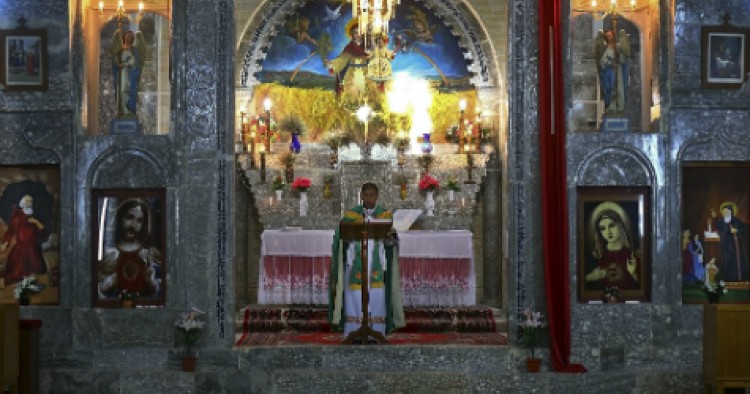 One hundred and sixty-three years before the Islamic State’s band of thugs rolled into the city, terrorizing the city’s minorities, my Protestant missionary ancestor, his wife, and two children settled in Mosul, a long way from the home they left behind in Utica, New York.

In 1851 Mosul was a prosperous trading town, known for its diverse mix of religious and ethnic communities occupying the lands of ancient Assyria. The Boston-based American Board of Commissioners for Foreign Missions saw in Mosul a unique opportunity to preach the gospel among a rich mosaic of faiths and sent my great-great grandfather, Frederic Williams, and his wife, Sarah, to set up a mission after several years of Arabic study in Lebanon.

Introducing Protestantism to Mosul and the Nineveh Plain, as the surrounding area was known, was a bit like bringing coals to Newcastle. The region was already home to many Christian churches and denominations, both Orthodox and Catholic, among them Chaldeans, Assyrians, and Armenians, who lived side by side with the region’s other religious and ethnic groups. These included Sunni Muslims, Jews, Kurds, Turkomen, Shabaks, Mandeans (who follow St. John the Baptist), and Yazidis, who recently came to world attention after being trapped in the Sinjar mountain range by Islamic State fighters and threatened with extinction for being, in the eyes of the fighters, “devil worshippers.”

Shortly after arriving in Mosul in 1851, Frederic Williams described in a report to the American Board a breakfast with six villagers who used nine dialects of five languages every day. “You will scarcely find a lad in his teens that does not use at least two tongues; and to travel a hundred miles from Mosul, four are necessary,” he wrote in a later report.[1]

This rich tapestry of tongues and sects was thriving in the middle of the nineteenth century, protected by a relatively benevolent Ottoman caliph.

Williams and other missionaries serving in the area reported generally cordial interfaith relations. English missionary Horatio Southgate describes in his diaries that while Muslims viewed Christians as second class citizens, Muslims nevertheless showed an unusual degree of “familiarity and regard” toward the Christians of Mosul. He writes that Muslims saluted Christian priests with great respect and sometimes even attended Christian services.[2]

Still, Frederic observed occasional disputes among the mix of religions and ethnicities, especially after growing tensions between Turkey and Russia placed new pressures on the region’s Christians, who were perceived as having greater loyalty toward Russia. The tensions, however, certainly did not approach today’s levels. As for Frederic, the main persecution he faced was harassment from the pastors of the Eastern churches, who were annoyed that a Yankee interloper was stealing their congregants away.

This rich history underscores the tragedy in northern Iraq today. For many Americans, the barbarity perpetrated by the Islamic State is business as usual, a routine part of the fabric of sectarian violence endemic to the Middle East. But as Frederic’s diaries reveal, diversity and a degree of tolerance unheard of today were more the norm in the area in the mid-nineteenth century. Indeed, this level of tolerance could generally be found under the Islamic Caliphate, which came to an end with the collapse of the Ottoman Empire in the early twentieth century. Minority communities then survived in “modern Iraq,” even under Saddam Hussein. How else could the Yazidis, a religious group believed to be more than 4,000 years old, have endured?

Today the Yazidis are being threatened with extinction by the extremists who make up the Islamic State. But the threats they face are not new. Sadly, Yazidis, like Iraq’s other minorities, were facing persecution by al-Qa‘ida in Iraq and its sympathizers years before the Islamic State rampaged through Mosul. In 2007 a series of car bombings almost completely wiped out two small Yazidi villages, killing more than 500 people and making it the deadliest event since the U.S. invasion of 2003.

As religious extremism and intolerance have become the norm in Iraq and minority communities have faced assassinations, bombings, arbitrary detention, and attacks on religious sites, hundreds of thousands have fled the country. Iraq’s large Christian community, which numbered more than one million in 2003, is today less than half that size.[3] This community took an even bigger hit in recent weeks, when thousands more Christians from northern Iraq fled their homes in Mosul and predominantly Christian towns like Qaraqosh to seek refuge in Kurdistan after Islamic State fighters gave them an ultimatum: convert to Islam, pay a religious tax, or face death. To mark Christians for conversions, the fighters spray-painted their homes with the Arabic letter “noon,” the first letter of the Arabic word “Nasara,” the Quranic reference to the supporters of Jesus.

Before the latest horrors faced by Iraq’s minorities, some who had stayed behind put forward various proposals to the Iraqi government and the international community suggesting how to ensure their protection. One idea floated was to establish an autonomous area for Iraq’s minorities called the Nineveh Plain Administrative Unit. But while the recent violence might provide good reason for establishment of a safe zone, it does not solve the root causes of the problems that have made life hell for Iraq’s minorities.

Regardless of what happens to the Islamic State, Iraqis and their government still have to address the illness tearing their society apart, that is, the communal and religious hatreds that have turned the country into a sectarian cauldron, pitting not only Muslim against Christian and Yazidi, but also Sunni against Shi‘a, and vice versa.

And though, with the invasion of Iraq, the United States played a significant role in creating the political environment for today’s sectarianism, it is Iraqis who must address the societal divisions currently wreaking so much havoc. President Obama recently told the New York Times that America’s military might be able to put a lid on the current Islamic State problem, but he added that Iraqis “themselves will have to make some hard decisions going forward about how they are going to live together, how they are going to accommodate each other’s interests, [and] how they are going to compromise.”[4]

If this does not come to pass, the rich mosaic of communities inhabiting northern Iraq and the Nineveh Plain—some of them for thousands of years—will indeed be permanently lost, remembered only through history books and the letters and diaries of one American missionary who had the good fortune to know the area in more peaceful times.